Anne Curtis ecstatic over her Hollywood experience; pleased by review she received from New York Times 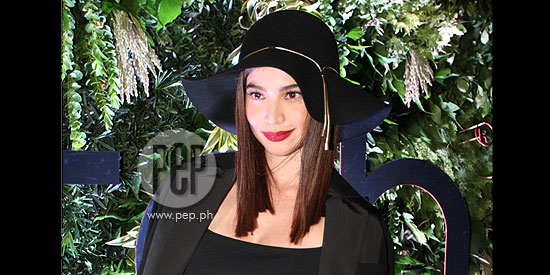 Anne Curtis on making it to New York Times' movie review of Blood Ransom: "They reviewed about the film, the great cinematography, and then they ended it with me. For me, it was like wow napansin! I wasn't even in all the scenes," says the Kapamilya actress in an interview with PEP.ph (Philippine Entertainment Portal) last night, November 4.

Fresh from her trip to U.S., the Kapamily actress gushed about getting a feel of what it's like to be a Hollywood star during the premiere night at the famed Arclight Cinemas in Los Angeles.

“A lot of Hollywood films premiere in those cinemas. So, when I walked the red carpet, alam mo, it's still a blur, but it was an amazing blur!

“I can't explain it. It's different. Yeah, we have the premiere nights here. But the moment I stepped on the red carpet, 'Anne, look here! To the left! To the right! Lalala! Lalala!'

“I was like, 'Oh my God! What was happening?' Alam niyo yung nanginginig yung [facial skin malapit sa] upper lips ko? I was so nervous! But it was just a great experience,” narrated the actress who plays a vampire in the movie.

Anne left for the United States last week and arrived in Manila just in time for the said event yesterday.

The 29-year-old Filipino-Australian actress further shared that she was thrilled to get up close with her celebrity crush Zac Efron and other Hollywood stars.

“I got to see Liam Hemsworth, Zac Efron, Mr, Big [a.k.a. John James Preston] from Sex and The City, and [much later] Nicole Kidman at the airport.

“Ako yung fan girl doon, but I had to control it because where we were, you're not allowed to be a fan. You have to blend in with the crowd,” she beamed.

Making her Hollywood experience extra special was the fact that Anne made it to New York Times' movie review of Blood Ransom.

Although it cited a fair share of the film's flaws, some of the positive points included Blood Ransom's “impressive cinematography” and “best efforts of a hardworking cast.”

At the end of the short review, Anne got a special mention about her onscreen presence and promising acting chops.

An excerpt from the said New York Times article stated, "Ms. Curtis, a Filipino-Australian actress making her American film debut, suffers nobly, with full lips and heavy eyelashes, parading in leather and occasionally acquiring fangs, a veiny complexion and flaring red eyes. She is not without charisma, but this is not her proper vehicle. It would be interesting to see her in a role of more down-to-earth dimensions.”

Over-all, Anne took it constructively and she was just so happy that she caught the attention of film critics in the U.S.

“Usually New York Times will say horrible acting or whatever. But it was a positive review about me.

“They were saying nga na New York Times doesn't just give a review to anything. They choose what they watch,” Anne gushed.

Asked about the reaction of her boyfriend Erwann Heussaff, Anne shared that he was really happy for her.

“When I reported to him about the New York Times, he said, 'That's a really great review. It's negative and positive at the same time.'

“Because of course they reviewed about the film, the great cinematography, and then they ended it with me.

“For me, it was like wow napansin! I wasn't even in all the scenes.”

Now that she had her taste of Hollywood, Anne said that she's considering doing another international film again.

As for her upcoming projects, Anne confirmed that she's slated to star in the movie adaptation of Bob Ong's book, Lumayo Ka Nga Sa Akin to be shown next year.

With all the career opportunities being thrown her way, the 29-year-old Kapamilya actress maintained that settling down is far from her mind at this time.

“Hindi pa! It works for the both of us kasi he's also just starting in the food industry. So it works that we're both kinda busy. Tapos younger pa siya so it works talaga,” Anne said with a grin.