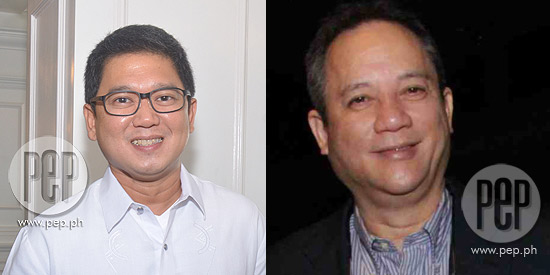 Herbert Bautista revealed that they have been working closely with Tonyboy Cojuango regarding the future of Cinemalaya.

The Quezon City mayor disclosed that he is dealing directly with Tonyboy, who is the chairman of the Cinemalaya Foundation, regarding the annual film festival.

“Yeah, we’re now working closely with people from Cinemalaya because Tonyboy Cojuango wrote to us and there are preliminary talks. Hopefully by next year it’s with us, Quezon City, already,” said Mayor Herbert in an interview held at Trinoma last November 5.

How would Cinemalaya be different if handled by Mayor Herbert?

“It’s still an ongoing discussion so until we have more definite details to be announced soon.”

Mayor Herbert calls on Quezon City and non-Quezon City residents to support the QCinema International Film Fest, which is now on its third edition.


QUEZON CITY TO HOST CINEMALAYA 2015. It will be recalled that for this year’s edition, Cinemalaya lost one of its main financial supporters when philanthropist Tonyboy Cojuangco no longer shelled out his personal money to finance the grants given to filmmakers.

(Read: Cinemalaya pushes through even without funding from Tonyboy Cojuangco)


In order to mount Cinemalaya 2014, the 10th edition of the film fest, former Cinemalaya Foundation President Nestor Jardin approached the Department of Budget and Management for additional funds and the amount of P15 million was added to the budget of the Cultural Center of the Philippines.

In a separate interview with PEP last November 6, Cinemalaya monitoring head Mel Chionglo explained that the government did not give additional funding for the CCP in order to mount the 2015 edition.

“There will be no funding anymore from the government to sustain Cinemalaya,” said Direk Mel Chionglo. “The executive committee is entertaining those who are willing to fund Cinemalaya.”

As a result, there have been concerns from the filmmaking community as to whether or not there will be another edition of the Cinemalaya Independent Film Fest.

Last night, November 10, Quezon City Mayor Herbert revealed in his speech that Quezon City will host the 11th edition of Cinemalaya next year.

"We want Quezon City to be the entertainment capital and the hub for artists," said the mayor who used to be an actor during the 1990s. Bistek (Herbert’s nickname) is best known for the youth-oriented movie Bagets. He and his siblings run Heaven’s Best Productions, which produced movies such as Burgos and Kamkam.

Read the full details in a separate article to be published soon on PEP.ph.


DIFFERENCES FROM PREVIOUS EDITIONS. Compared to the previous two years of the Quezon City film fest where local films were shown only for exhibition, the films included in this year’s QCinema competed for various awards such as Audience Choice, Best Picture and Jury Prize.

Quality international films are also included in the lineup.


Quezon City Mayor Herbert intends the QCinema International Film Fest to be bigger this year and better in the years to come.

“Those that are supposed to be taboo ay mailathala natin dito because we are realists. Ito yung mga totoong nangyayari sa atin pong lipunan. Pero today, dahil 75th Founding Anniversary ng Quezon City, we will depict the social life of Filipinos who are Quezon City residents.”

The mayor also awarded the Lifetime Achievement Award to 80-year old Cecille Baun, the woman responsible for the prosthetics and special makeup for classic and popular films such as the first Shake Rattle and Roll’s “Manananggal” episode, the film Tiyanak, the Darna movies of the 1970s and a slew of other films both local and international.

In her more than three decades of working in the Philippine movie industry, Cecille Baun considers QCinema’s first recipient of the Lifetime Achievement Award “the biggest award” she has ever received.

An exhibition of Ms Cecille Baun’s works can be seen during the entire festival, which will run until November 17.

BUDGET FOR QC FEST. QC Vice Mayor Joy Belmonte also mentioned where the bulk of the budget for the festival came from.

“Ang budget galing sa kanya,” referring to Mayor Herbert, who serves as the chairman of the QC Film Development Commission.

The Mayor made light of this and joked about his participation in the festival.

“Participation ko, ako tagapanood…Quezon City government effort ito, everybody has their own share and contribution.”

Mayor Herbert then described the evolution of the festival.

Aside from Trinoma, films in QCinema will also be shown in Fairview Terraces and Robinsons Movieworld.

The festival runs until November 11 at Trinoma, November 12-14 at Fairview Terraces and November 15-17 at Robinsons Magnolia.