REVIEW: Mañanita is Bela Padilla at her most complicated 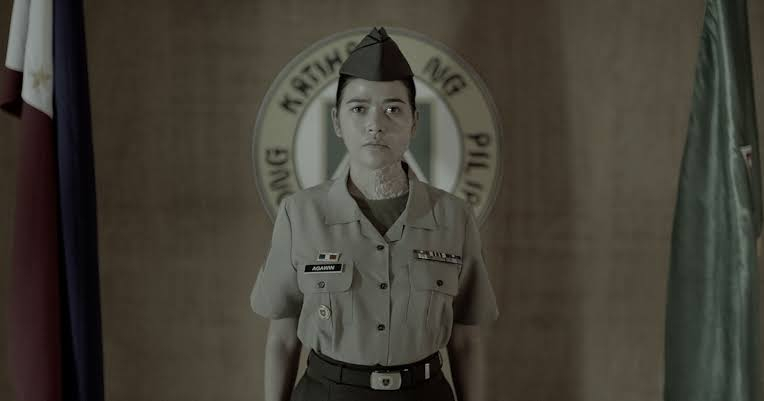 If you're one of those people who miss Lav Diaz's films, then Paul Soriano's Mañanita, penned by Diaz, may be the pocket Lav Diaz to satiate you.

It certainly takes on the slow pace and captures even the mundane seconds of its character's life--some of the hallmarks of Diaz's oeuvre.

The movie stars Bela Padilla as sniper Sgt. Edilberta Agawin who is dismissed from service. She then is submerged in the mire of beer (a lot of beer--all kinds of beer!) and emotions.

Bela is exceptional as Agawin. Her quiet moments (of which there are many) are steeped in a wide range of sadness, depression, submission, melancholy, etc. She communicates this not only with her expressive eyes, but her entire face, her manner of speaking (or not speaking), the way she carries herself.

The first sequence is the highlight of the film. It takes its time, as Agawin watches and waits, as darkness turns to twilight then sunrise. She is camouflaged and watches from her perch as one by one, people--from children to adults--emerge from a small hut on a mountain range.

Patiently, she lies in wait. There is no dialogue, only ambient sounds. Even the color seems to be monochromatic, as the scene unfolds, seemingly like a typical bucolic sunrise. The shots oscillate between her point of view through the crosshairs of a gun to Agawin herself, breathing, adjusting, hesitating, then finally, making a decision followed by swift action.

Direk Paul is able to milk the suspense out of those precious minutes.

The soundtrack is integral to this movie, that tells of the story of the "mañanita," a serenade done in some Latin American cultures, adopted by members of the police force in Davao to, as they say, spur suspected drug criminals to surrender out of guilt.

Because the song lyrics are integral, they take over the scenes and seem to take the place of any dialogue or narration.

Agawin has a skin condition, keloids, that cover about half of her face and neck. It functions as something of a mask that slowly and carefully comes undone as the story progresses. It is but one outside manifestation of the inner turmoil in her character.

The abandoned and seemingly useless things that surround her are often seen as a recurring theme: old army barracks, shells of helicopters, empty playgrounds.

These all echo Agawin's feelings as she continues to drown her sorrows with alcohol. When she is not staring aimlessly and drinking beer, she is showering--in sequences where she seems to be trying to forget, unsuccessfully, her state: destitute, desperate, directionless.

She is only spurred into action when she is moved by an inner motivation to leave her immediate environment to go all the way to Pampanga.

But for a movie that wants to capture the way daily life unfolds, it presents travel from Davao all the way to Cubao, as possible to be taken in a few hours on a taxi.

Then, for some reason, when she arrives in Pampanga, she talks to a vendor (played by Joel Saracho, who has also appeared in many of Diaz's films), who speaks to her in Bisaya.

As Agawin wrestles with what to do next, she encounters a priest character on a hill. Asking for his counsel, she listens to him talk about how the foundation of truth is valuing life and confesses the story of a pivotal period in her childhood.

He advises her to listen to the things she cannot see and to her soul, and talks about faith. It is an optimistic, benevolent message.

And, in a moving scene, there is a piano player playing a piano and a horse. In a sequence that echoes the first, Agawin is crouched outside the house of a target and waits... but she remains undecided until the very end.

It's not for everyone. And at the end, this writer had to ask: Did that really need to take up 2 1/2 hours of my time?

Mañanita has been screened in international film festivals in Tokyo, Japan and Talinn, Estonia. It will be screened in Philippine cinemas starting December 4, 2019.