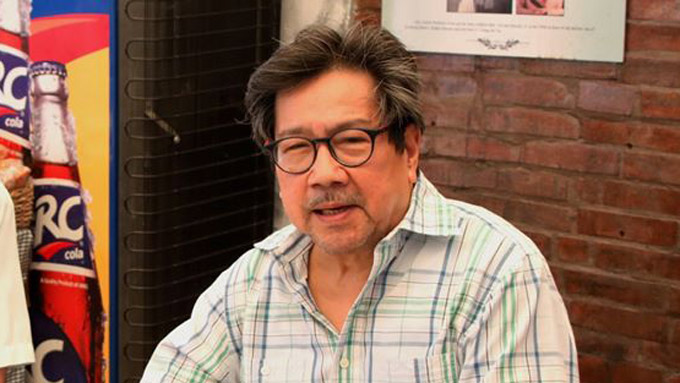 Former Film Academy of the Philippines head Leo Martinez on why the FDCP handled the Luna Awards 2019: "Nag-merge yun because of the centennial celebration."

Sagot ni Mr. Martinez, “Simple lang, Mell. Nag turn-over ako last November 5, in the presence of our FAP Board [of Trustees], and said thank you and goodbye.

Did he or his then FAP board actually plan or intend to seek assistance from Film Development Council of the Philippines (FDCP) chairperson Liza Diño-Seguerra, since nasa transition period nga ang FAP at that time?

Paliwanag ni Leo: “Nag-merge yun because of the centennial celebration. And Luna [Awards] has been FDCP supported the last few years."

Sagot ni Vivian, “I think the presscon was moved to November 20. Awards Night is in November 30. FDCP is helping us this year's awards night because of our transition period.”

“Secretariat is being handled by FDCP for now... we're in the middle of changing all FAP personnel,” tugon niya.

Who are your co-officers or officials of FAP?

“We'll be announcing it as soon as we are settled,” sagot niya.

Tanong uli namin kay Vivian, “What transpired with the organization to have a new director general?”

1. How do you feel that you were the one appointed by Executive Order of being the Director General of FAP after Sir Leo Martinez retired after 16 years?

2. What is your over-all vision or generic plan / objectives / aspirations for the new FAP under you?

Kinabukasan, November 13 ay sumagot siya: “Good morning. Let me finish first the turnover and the organizing of my management team then will come up with a statement. Thank you very much for all your support “

Here’s the official statement in full:

“The Film Academy of the Philippines (FAP) was established in 1981, mandated to promote film worker careers, advocacies, work relations, among many things. Likewise, FAP was tasked to recognize superlative performances by its members through the Luna Awards, which is considered by many as the pinnacle of all Philippine film industry awards.

“But the FAP became a fallen angel of late and has been reduced to menial work, bordering charity, and entitlement. It functioned through donations, mostly from the Metro Manila Film Festival (MMFF) which FAP has had a hard time and a rough relationship with, unable to collect remittances from which resulted in cash flow issues for the academy. This is not an indictment on the MMFF but the anemic leadership demonstrated by FAP which gave up on its mandate altogether. This weakness resulted in the expulsion of FAP in the ExComm of the MMFF.

“Another recent example is the abrogation of the then FAP leadership of its prestigious Luna Awards to the Film Development Council of the Philippines (FDCP), a partnership that has never been clearly communicated to us — the new administration of the FAP. It appears that the main responsibility of overseeing the preparations and all the processes for nomination and selection of winners for the 2019 Luna Awards has been given to the FDCP, which is a clear violation of FAP's mandate.

“Therefore, I, together with the new management of FAP is here to clean house, correct erroneous traditions, bring back FAP to its roots, and center on the welfare of film workers. There will be arduous days, grumblings, hate and discontent ahead. As L. Tolstoy said, "Truth, like gold, is to be obtained not by its growth, but by washing away from it all that is not gold."

“Film Academy of the Philippines” 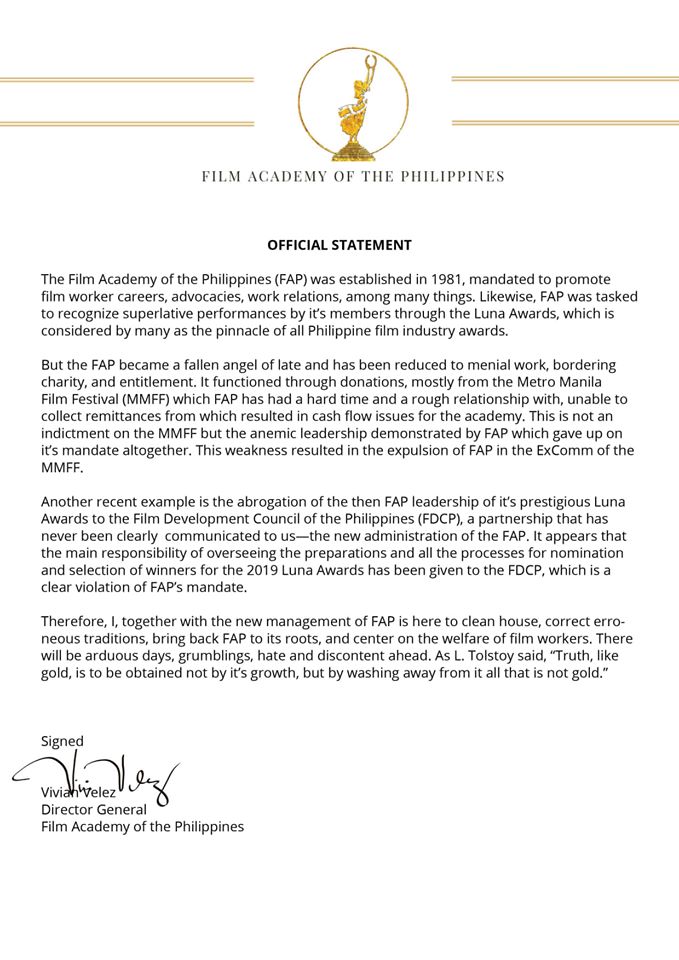