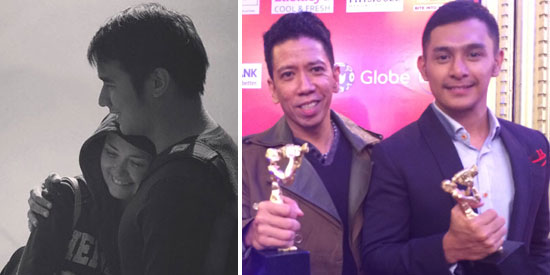 Angelica Panganiban (left frame) won the Best Actress award at the 10th Cinema One Originals film festival. She is joined in this photo by JM de Guzman, her leading man in That Thing Called Tadhana. Kanakan-Balintagos (formerly Auraeus Solito) and Sandino Martin (right frame) hold up the trophies they earned in the Best Director and Best Actor categories for their film Esprit de Corps.

Angelica Panganiban wins best actress for the second time around in the Cinema One Originals film festival.

The awarding ceremony of the 10th Cinema One Originals was held last November 16 at the Dolphy Theater, inside the ABS-CBN complex, in Quezon City.

Since the Kapamilya star was unable to attend the awards night because she is currently out of the country, director Antoinette Jadaone accepted her award, saying:

“Sobrang happy ako for Angelica. Nasa U.S. po siya ngayon nagbabakasyon kasama ang real life niyang Anthony [referring to Angelica’s boyfriend John Lloyd Cruz]. But I’m sure if she was here, she would thank all her heartaches and experiences that helped her become the great actress that she is.”

Here is her statement (published as is):

For the best actor category, it was a tie between Sandino Martin (Esprit de Corps) and Matt Daclan (Soap Opera).

Sandino, for his part, won for his dramatic performance as a young cadet in training during the dictatorship of Ferdinand Marcos in the film Esprit de Corps.

He accepted the trophy with tears in his eyes, as he thanked his director Kanakan-Balintagos for the guidance.

Indie actor Matt Daclan also dedicated his award to his director, Remton Siega Zuasola, and his Soap Opera family. In his speech, he also encouraged his fellow budding actors to keep believing in their craft:

The Best Picture Award went to Violator, a film that depicts the plight of Manila cops stranded in a police station with a mysterious prisoner at the height of a typhoon. Directed by Dodo Dayao, this film won four awards in all, including those for Best Supporting Actor (for Andy Bais), Best Sound and Best Editing.

To mark a decade of redefining films, the directors whose films are past winners in Cinema One were honored for their exceptional talents in filmmaking.

Here is the full list of awardees in the 10th Cinema One Originals film fest: