Here's how much Miracle in Cell No. 7 earned at the box office so far

Miracle in Cell No. 7 has earned P475 million in the Philippine box office so far.

This is the revelation made by the film's producer, Viva Films, through its Facebook account earlier today, January 15, 2020.

This drama film emerged as the highest grossing movie among the 8 official entries that were part of the 2019 Metro Manila Film Festival.

Aga Muhlach top-billed Miracle in Cell No. 7, which is the local version of the South Korean film with the same name.

In the Philippine adaptation, Aga played Lito, a man with a developmental disorder who is imprisoned for a heinous crime that he did not commit. Xia Vigor played the young version of his daughter, Yesha, while Bela Padilla appeared as the older version.

Through the help of his fellow inmates, Lito is reunited with his daughter inside the prison.

For the 45th edition of the MMFF, Vice Ganda and Anne Curtis top-billed the comedy film, The Mall, The Merrier.

During the January 6 episode of It's Showtime, Vice Ganda dropped hints about the box-office of gross of this movie co-produced by Star Cinema and Viva Films. 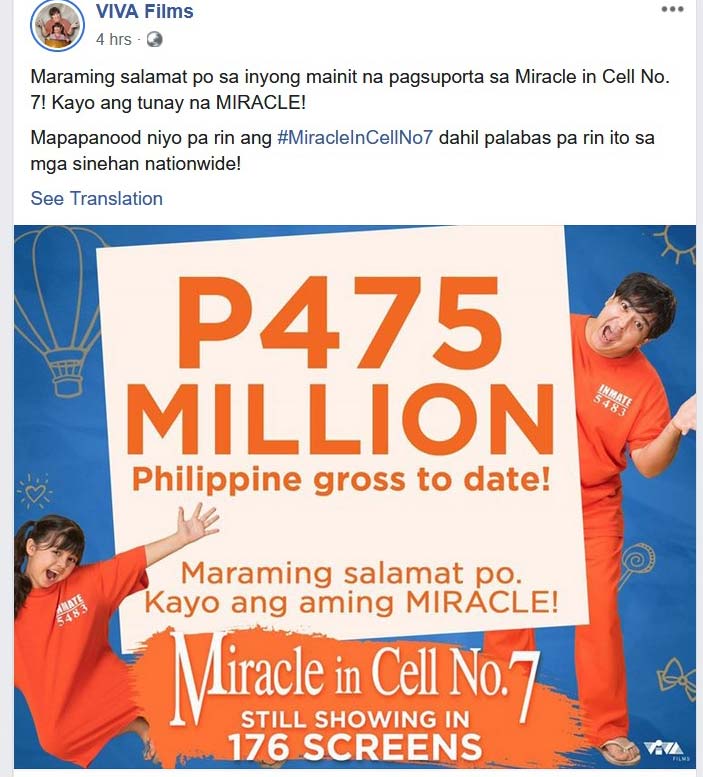