Vilma Santos to do slapping scene with Angel Locsin in 2015 movie? 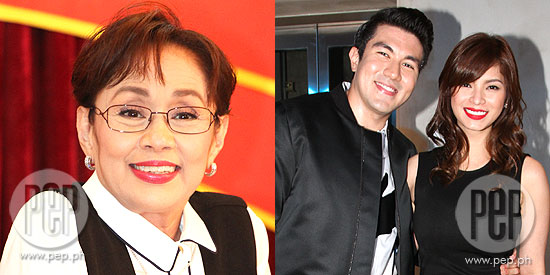 Batangas Governor Vilma Santos confirmed that she will be headlining a movie with Angel Locsin under Star Cinema sometime in 2015.

At her recently-concluded birthday presscon, Governor Vi shared that they were supposed to start doing test shots this November.

But they had to move the pre-production meetings within the month of January due to the governor-actress’s health issues for the past few months.

As for the casting of the film, Vilma admitted that her son Luis Manzano was supposed to be part of her movie with Angel.

While it could have been an interesting teamup, the governor-actress revealed that Luis actually turned down the offer.

WORKING WITH ANGEL. Rumor has it that there would be a slapping scene between Vilma and Angel for the much-anticipated film.

While Vilma remained tight-lipped about the exact genre of the project, she hinted a few details about what to expect from her newest big screen character.

“Pero nung nag-usap kami at nag-meeting, I told them I want something new.

At any rate, Governor Vi can’t wait to start shooting so they can finish the movie said to be Star Cinema's Mother's Day offering for May 2015.

CAMEO FOR DARNA MOVIE? On a lighter note, Governor Vi was also asked if she’s open to doing a cameo for the movie remake of Darna topbilled by Angel.

But Governor Vi was quick to say that she’s not willing to be in costume this time around.