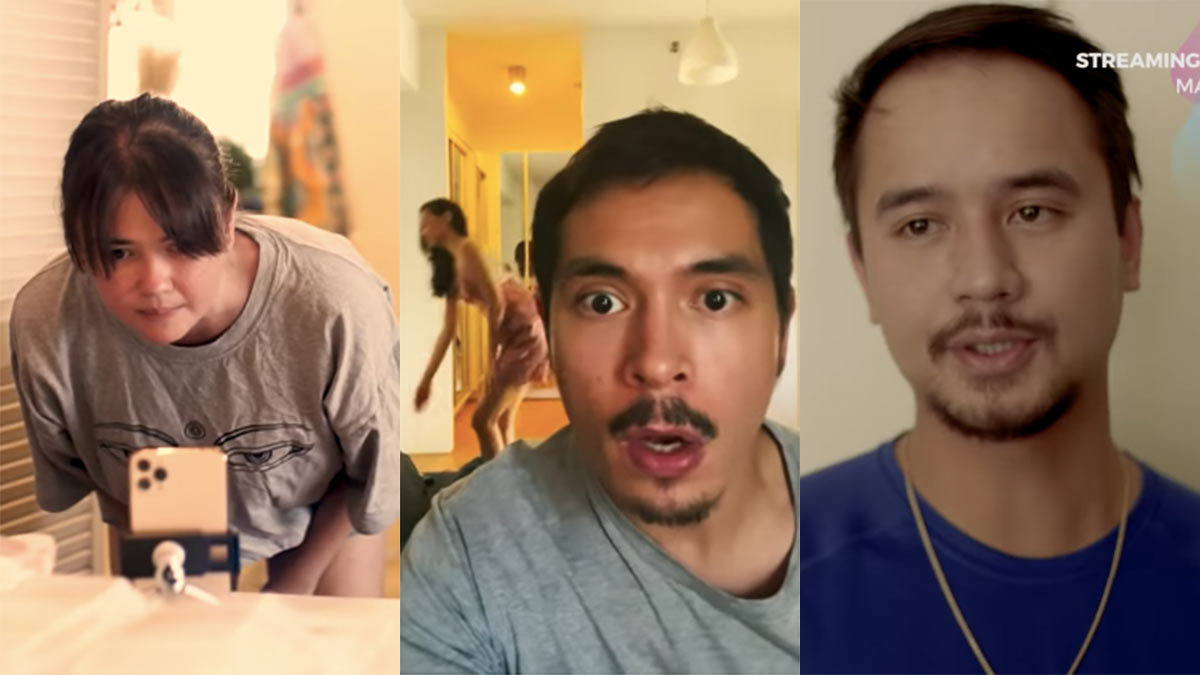 Love Lockdown is coming to iWant.

Despite the restrictions set by the enhanced community quarantine (ECQ), ABS-CBN was able to create this three-part movie for its streaming platform.

The movie, which was shot in the confines of the stars' respective homes, is helmed by four directors coming together from different locations: Andoy Ranay, Darnel Villaflor, Noel Escondo, and Manny Palo.

How the no-contact shoot happeneD

The movie was completed, thanks to its cooperative stars who served as "co-directors" using basic equipment.

This was discussed during the online media conference yesterday, May 13.

Director Manny Palo, whose TV credits include The General's Daughter and The Good Son, explained, "Si Direk Darnel, na-assign sa kanya iyong kuwento nila Kylie at Jake, who were living in one unit or one condominium, so the actors were actually present together in one space.

"Kay Direk Andoy naman at kay Direk Noel, they are staying in the same compound, isang condo pero magkakaibang unit sila. So physically, iyong mga actors, nandoon sila and all four of them are there."

For Direk Manny's part, he had to direct his actors Sue Ramirez, Tony Labrusca, and Arjo Atayde through the video conference application Zoom because they all live in different locations.

"So, the challenge is how can we come up with a product, how can I shoot these actors na magkakalayo sila and yet when you watch them, parang physically magkaharap sila."

Aside from that, all actors were given the basic equipment for the filming.

"Among us directors, we decided to use the iPhone as the main camera and then we communicate using our laptops. We trained the actors how to operate the audio equipment, paano i-on, paano sila mag-lapel.

"In my case, in my story, iyong mga actors were my co-directors.

"Ang ginagawa ko kasi after a series of meetings with them, I ask them to show me their own space, anong space ang comfortable nilang ipakita, like the bedroom, the living room, the dining room.

"From there, I would tell kung anong anggulo, put the cellphone there, and then we would rehearse, and all the directions were given in a process like this, through a meeting, and we somehow manage to mount the scenes."

It was also easier to shoot their scenes since they live in the same building.

INSPIRATION BEHIND THE MOVIE

This ABS-CBN project is proof that creativity knows no bounds.

"We cannot stop creating kahit may lockdown tayo so we try to study all the possibilities on how we can create something, kahit nasa kanya-kanyang bahay kami. And then, through a process of brainstorming, lumabas nga itong Love Lockdown."

Direk Darnel said that the movie was inspired by the 2018 American thriller mystery movie Searching, which was entirely set on computer screens and smartphones.

"So, the biggest challenge was really to produce something worth watching despite all the restrictions of ECQ.

"So storywise, the cast who will fit the stories na iba-iba, na assigned sa akin, was the first story."

The first story is about lovers Jacob (Jake) and Karen (Kylie), who are stuck in a condominium unit during the lockdown.

Jacob, however, is married to Lesley (Angelica), who is left alone in their own unit, and eventually discovers the illicit affair.

Direk Darnel said that the feel of the first story is somewhat similar to the Korean drama series A World of Married Couple, which is currently a hit among Pinoy viewers.

The movie continues to follow Lesley, who, while in the process of moving on, meets a new friend.

She later finds herself becoming a part of an interwoven series of events, involving other people—the characters of Sue, Tony, and Arjo—during quarantine.

Some of the artists present during the media conference also shared what they have learned from doing the project.

Jake said the experience somewhat brought to life his dreams of doing behind-the-scenes work for a project.

"I always wanted to be behind the camera as well, but I was definitely not rushing to do that. But I guess this just landed on my lap, it happened just like that.

"Although it is very tiring after the three days of shooting, I was completely exhausted, iyong experience namin was ngaragan. But we had to learn things that we didn't know how to do, like I don't know how to use the audio, I don't do that.

Arjo, for his part, got some help from his sister Ria in shooting his scenes.

He also revealed that he had a hard time getting into his character because the location was set at his home—which he considers as a place for rest.

He said, "I couldn't get into the character right away because I'm at home. Sanay kami sa we have a certain work mode, e. Kapag nasa bahay kasi kami, I mean for several artistas, I think that's how it is e, kapag nasa bahay pahinga talaga.

"So I really wouldn't feel the work mode, but with the help of Direk Manny explaining it to me, sila Miss Kylie [Balagtas, business unit head], and everyone else.

"My sister, si Ria, is the one who shot me. We were doing it throughout the day, it was easier than I thought it was gonna be because of everyone helping out."

The movie's unique format appealed to Sue, who accepted the project because she deems it to be a part of Philippine cinema's evolution.

Love Lockdown, produced by Dreamscape Entertainment, starts streaming on iWant on May 15, 2020.

Dreamscape Entertainment, an ABS-CBN unit, is known for its works, such as FPJ's Ang Probinsyano and Love Thy Woman, as well as iWant originals Mga Batang Poz and Call Me Tita.