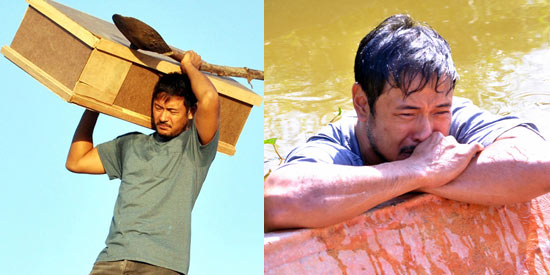 Magkakabaung, starring Allen Dizon, opens a door for discussing the politics and economics of death. This drama film about a father's love will be screened from December 16 to 24, 2014 at SM Megamall and Glorietta 4 cinemas.

The plot of Magkakabaung (The Coffin Maker) is simple and straightforward enough: an impoverished single father accidentally kills his eight-year-old daughter through wrong medication. In the aftermath of her demise, he scrambles to bury his dead, grief and guilt.

So it’s a pleasant surprise that director Paul Jason Laxamana was able to turn this otherwise commonplace tragedy into an uncanny portrait of a father’s pride and love in the face of adversity.

Randy (played by Allen Dizon) lives a hard knock life in Santo Tomas, Pampanga. The days stretch long and hot as Randy makes coffin after coffin and his only child Angeline (played by Allen’s real-life daughter Felixia Dizon) whiles the time away with other children. At sundown, the two of them return to their humble home complete and happy despite their poverty.

One day, Angeline develops a fever after swimming with the other kids in the dike. Simple minded as he is, Randy gives the child a strong dose of antibiotics from which she dies of allergy.

Half- mad with grief and unable to claim his daughter’s body from the hospital, Randy is forced to make a deal with an unscrupulous funeral parlor owner (Emilio Garcia) who offers to cash in on Angeline’s remains by selling her corpse to cadaver buyers.

Will Randy give in or will he do whatever it takes to bury his daughter with dignity? 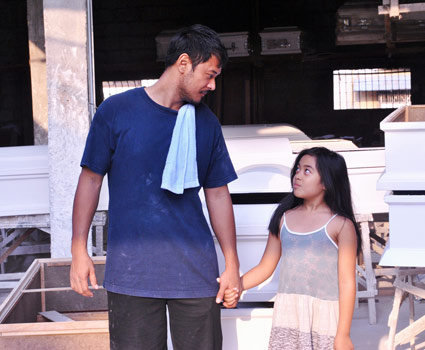 Magkakabaung is a relatively slow moving picture, possessing a languor that mimics the stillness and inward frustration of living in a provincial backwater. This method works both to its advantage and disadvantage for, combined with the occurrence of random events entirely unrelated to the main plot, it tests the viewer’s patience.

But hang in there, for it is worth staying until the end.

Magkakabaung is remarkable for its stillness and restraint. Laxamana recognizes well the power of silence and tension in delivering highly emotional scenes.

Dizon was at his finest in the scene where Randy first receives the doctor’s confirmation of Angeline’s death, his face transformed into a blank but slightly tensed mask of disbelief and his body slightly trembling with shock.

As his world crumbles from within, the attending nurse retreats to a quiet corner of the emergency room to fight with her boyfriend over the phone while a post-mortem care personnel casually tells him to have one last look at his child’s body before disappearing somewhere.

On his way home, an old beggar pesters him into giving alms.

These micro stories frame Randy as a small fish in a big pond. Indeed, the world does not stop for one man’s tragedy.

As Randy deals with his guilt and the problem of his daughter’s burial, his back story emerges through the voices of supporting characters, one of them Angeline’s estranged mother (played by Gladys Reyes).

Dizon’s portrayal is gut-wrenching and heartbreaking in its control, the sadness dripping from him like drops of acid.

A man who loves deeply, indeed, when he has nothing left to give but himself, will steal, will carve the very earth with his bare hands for the one he loves.

Towards the third act, the film begins employing magical realism to convey Randy’s longing for Angeline. These scenes are particularly precious to the picture for it is in these surreal moments that high emotions are released.

In the end, at sunset— the happiest time of the day for them, Randy and Angeline leaves us with a beautiful of togetherness. Albeit strange for a postcard photograph, it is an image that will stay with us for a very long time.

Magkakabaung touches matters well beyond the grief of losing a loved one. The film, in fact, opens a door for discussing the politics and economics of death. It invites the viewer to ponder on the value of the body once the last breath has escaped.

Magkakabaung will also be shown from December 17 to 24, 2014 at SM Megamall and Glorietta 4 cinemas.

This film is graded A by the Cinema Evaluation Board.

It is one of the five New Wave entries chosen to be part of the 40th edition of the Metro Manila Film Festival.