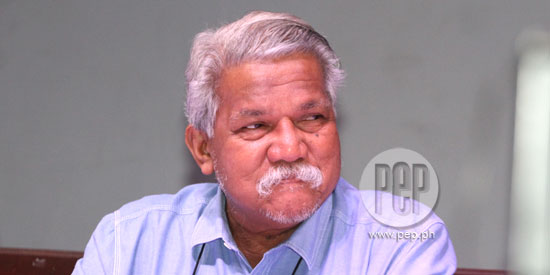 Tikoy Aguiluz is still shocked by the fact that the original trailer of his horror film Tragic Theater was given an X rating twice by the Movie and Television Classification Board (MTRCB).

During the December 18 presscon for Tragic Theater, the acclaimed director admitted that he was dismayed that the trailer was initially deemed "too scary" for public exhibition by the MTRCB.


On his Facebook account, Direk Tikoy posted: "Can't believe they gave an x rating twice to a trailer for a horror film: too scary was the verdict. akala ko ba horror film ito?"


The veteran director behind Boatman and Biyaheng Langit admits:


The new trailer indicates that "a film theater collapsed during construction in 1981...more than a hundred people were believed to have been buried alive...In 1999, a group of spirit communicators attempted to exorcise the theater."


According to a synopsis provided by Viva Films: "When the film center collapsed during construction, it was believed that there were still workers who were alive but trapped by steel bars and were not rescued, but rather, cement was poured over them to avoid delay in the construction."


Andi Eigenmann is cast as Anne Marie Francisco, a young lady who spearheaded the exorcism. Christopher de Leon is cast as Bishop Agcaoili while John Estrada plays a priest who helps Anne Marie conduct a séance.

BASED ON THE MANILA FILM CENTER TRAGEDY. A film adaptation of a novel of the same title written by Gilbert Colonel, Tragic Theater depicts an exorcism held at the supposedly haunted Manila Film Center in Pasay City.

Gilbert, who was also present during the presscon, shared that his book Tragic Theater was based on the tragedy that took place at the Manila Film Center.

Back in November 1981, the reportedly rushed construction of the building resulted to the collapse of an upper floor scaffolding and allegedly left an unknown number of workers buried underneath the debris.

Gilbert further recalled what he knew about the said accident: “I was in college then.

“I remember one or two days after the accident, there is a big headline story.

“For two days it was on the front page, and then on the third and fourth day it was totally gone.

“There was this talk that there was a cover-up.

“On the book, I based all my facts on the news at that time. I did a lot of research.

“I’m very familiar with the film center because after the Manila International Film Festival [in February 1982]—that was the building was built for—they started showing movies from the Experimental Cinema of The Philippines.

“And my friends and I will watch the film that was shown there.”

As for the controversies surrounding the real-life tragedy, Direk Tikoy said that he’s ready for whatever feedback he’ll receive once the movie Tragic Theater is shown in theaters on January 8.

When prodded about his thoughts about his latest film, Direk Tikoy revealed that his production team wasn’t allowed to shoot scenes at the Manila Film Theater.

I-WITNESS DOCUMENTARY AS RESEARCH MATERIAL. Direk Tikoy said that they depicted over a hundred actual victims of the tragedy, six of whom have speaking lines.

The director of Tragic Theater mentioned that he gathered additional info about the accident from the October 2005 episode of GMA-7’s documentary show I-Witness.