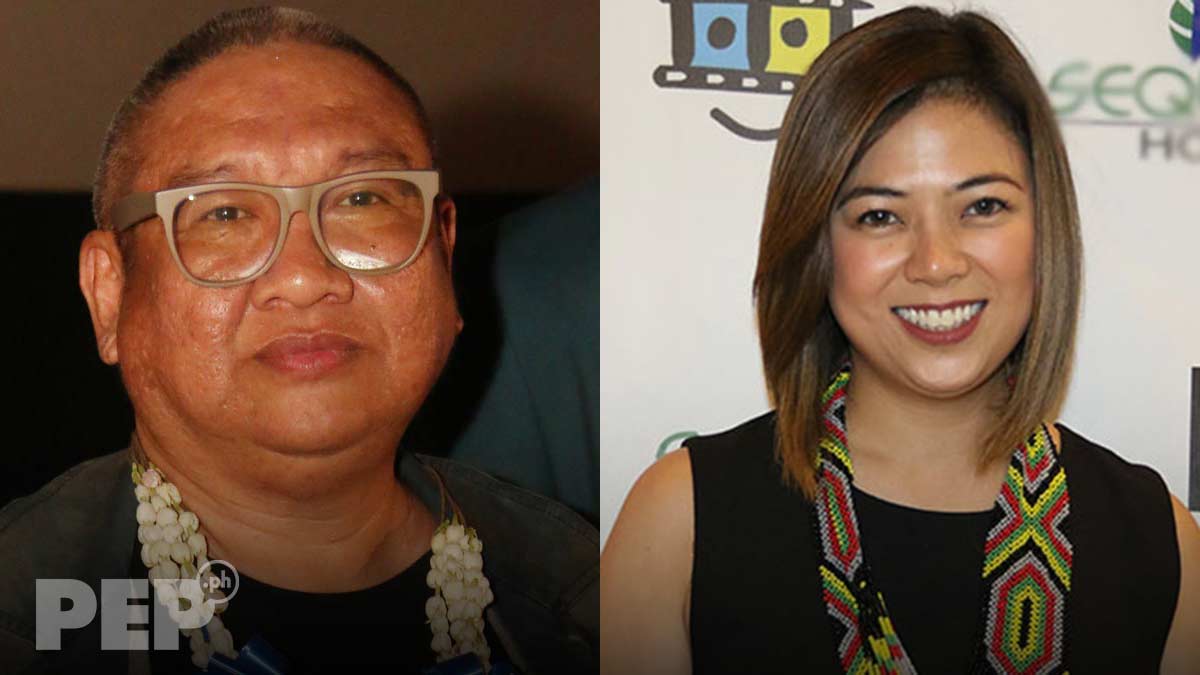 Erik Matti blasts Liza Dino and FDCP for a "misleading" post about the acquisition of Filipino films on Netflix. Erik tells Liza, "This post by FDCP looks misleading. I read the article and nowhere was it mentioned that FDCP brokered the deal in behalf of the films. In fact, there was no mention of FDCP anywhere in the article."
PHOTO/S: PEP Files

Film director Erik Matti and other filmmakers called out the Film Development Council of the Philippines (FDCP) and its chairperson, Liza Dino-Seguerra, for a claim they deem to be "misleading" regarding the showing of 15 Filipino films on Netflix in August and September 2020.

On Friday, July 31, Liza wrote in her post on Facebook that the decision of Netflix to show more Filipino films was apparently the result of FDCP's initiatives.

Part of Liza's Facebook post read, “The FDCP has maintained a very good relationship with NETFLIX since 2017 and has been partnering on many initiatives from policy discussions, distribution of Filipino films to capacity building programs like Post-Production Workshops to elevate the level of filmmaking in the country.”

Liza’s also said in her post that local distribution companies have continuously partnered with Netflix and other international companies to “expand their audience.”

She wrote, “We are happy that our local distribution companies are continuously engaging with these international companies to expand their audience.

"With the world's inevitable shift to digital platforms now even more expedited because of the pandemic, the local industry is adapting to the change.”

On the night of July 31, Erik posted on Facebook a screenshot of Liza’s original and unedited post about the 15 films being picked by the online streaming service for home television audiences.

The screenshot did not include the line where Liza mentioned being happy about the local distribution companies’ engagement with international companies.

On his page, Erik, who has openly criticized FDCP, began his post positively, commending even the agency seemingly for its effort to give the blighted local movie industry "a glimmer of hope."

But in his next remark, it became clear that Erik's post was to point out that Liza's post “looks misleading."

He cited an article of The Philippine Star published on July 30, 2020 in which the directors and producers of the 15 Filipino films were interviewed about how their films got into Netflix.

According to Erik, the article never mentioned that FDCP “brokered the deal in behalf of the films.”

He wrote (published as is), “After months of criticizing the FDCP, I came across this post by its chairperson where for a moment I thought that FDCP facilitated and was party to the acquisition of 15 new Filipino films by Netflix.

"For a second there, I saw a glimmer of hope that FDCP may actually be doing something good to our movie business and felt guilty why I was so hard on them.

“Until, I read the article by Philippine Star in full.

“This post by FDCP looks misleading. I read the article and nowhere was it mentioned that FDCP brokered the deal in behalf of the films. In fact, there was no mention of FDCP anywhere in the article. But FDCP Chair Liza Dino’s post, as read, was written to hint that it was through FDCP’s efforts that the Netflix deal happened for these producers.

"It’s the kind of ambiguous double speak that’s common nowadays not just with our government but also in the Trump empire. A double speak that people saying it can easily take back if and when questions arise regarding the veracity of the statements made.”

He also recalled his own talks with Netflix about possibly inking a deal for the acquisition of his films.

In the continuation of his post, Erik iterated that FDCP's post was silent about the film studios endeavoring to get the Filipino films on the streaming site.

He wrote, “Can anyone shed a light on this? From our experience with dealing with Netflix, us producers negotiate for ourselves. Viva talks to Netflix directly. No middle man. No FDCP in between. So does Regal and so on and so forth.

“Nowhere have I heard FDCP brokering a deal in behalf of studios. In as much as the post never literally said it brokered the deal, the attachment of announcing the 15 new acquired films and FDCP having a great working relationship with Netflix over the years can’t help but ‘suggest’ that FDCP is attached to the reason these films were acquired.

"Nowhere also in the post that acknowledges or congratulates the efforts made by these producers to bring Filipino films out there making it even more focused solely on the relationship of Netflix with FDCP.”

He then added, “Judging from the comments on the post, most were congratulating FDCP on this deal and how the movie industry isn’t recognizing the help FDCP gives us. But without the FDCP clarifying that ‘by the way, we are not the one who closed the deal. We are just proud of our producers and filmmakers.’ in the comments below, their office hints even further and sort of silently affirms that they are indeed part of the acquisition.”

Most of their replies set the record straight: that producers and filmmakers personally went to Netflix to pitch and ink a deal for their films to be shown on Netflix.

Perci Intalan, the producer of IdeaFirst Company and director of Distance, wrote, “Like many producers, I worked very hard to find my own contacts at Netflix, maintain a good relationship, and negotiate for the best deal possible. I also respect it when they say that something should not be announced until they make the announcement themselves.” 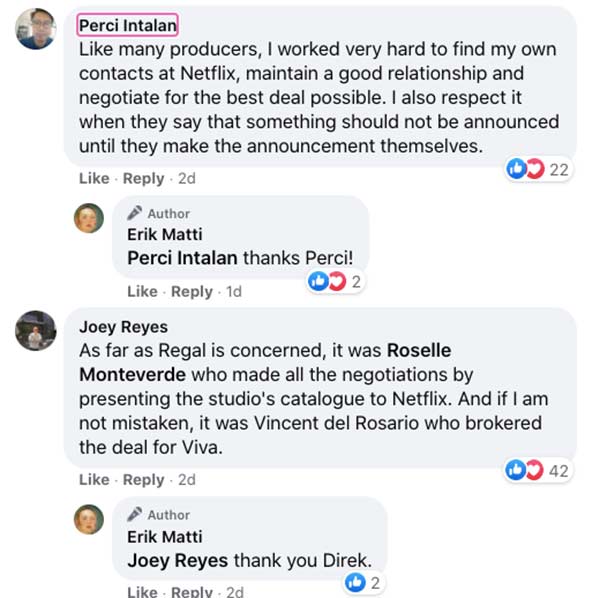 Finding You director Easy Ferrer said that he and Regal Films producer Roselle Monteverde went to Netflix to pitch the film outfit’s catalogue.

He wrote in the comments section, “Excuse me po sa kanila. As far as I know, it was me and Ms. Roselle who personally went to Netflix to pitch our catalogue. I don’t have any knowledge na they were involved with any help. If they were, I am unaware.”

Paul Soriano, the producer of Love The Way U Lie, said that it was his co-producer, VIVA Films, that inked the deal with the streaming site.

Love The Way U Lie and Joel Lamangan’s Hindi Tayo Pwede, also produced by VIVA Films, will be labeled as a "Netflix original."

Nestor Abrogena, the director of Tayo Sa Huling Buwan ng Taon, said that it was his producer, TBA Studios, who closed the deal with Netflix. 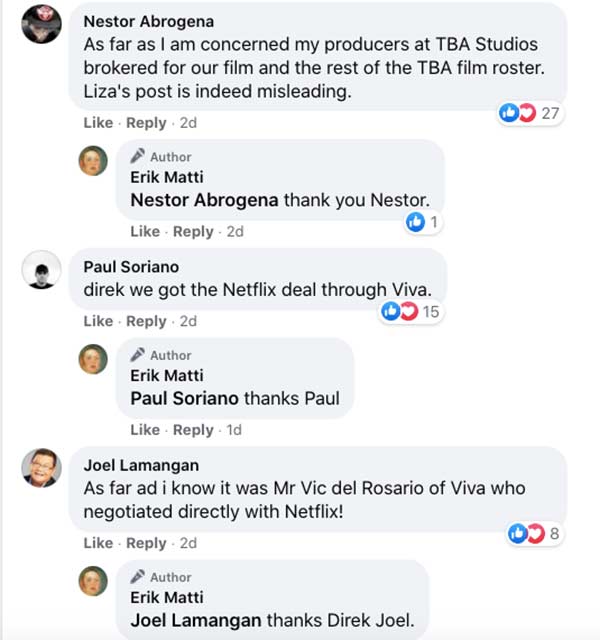 He wrote in the tweet, “As far as I am concerned, Liza Diño, it was TBA Studios who brokered for my film and other TBA Films. Do not mislead the people in believing you or FDCP actually had a hand at this.”

According to the edit history, the part mentioning the local distribution companies was added on August 1, 2020 at 9:27 a.m.

“I was just informed by NETFLIX ASIA that fifteen (15) new Filipino titles have just been acquired by the company to stream on the NETFLIX platform starting this AUGUST.

‘Staying true to their commitment to bring more Filipino content to the service, the content provider is announcing new films from Viva Communications, Regal Films, TBA Studios, The IdeaFirst Company, and CleverMinds. This new lineup cuts across multiple genres have something for everyone.’

“We are happy that our local distribution companies are continuously engaging with these international companies to expand their audience. With the world's inevitable shift to digital platforms now even more expedited because of the pandemic, the local industry is adapting to the change.

“The FDCP has maintained a very good relationship with NETFLIX since 2017 and has been partnering on many initiatives from policy discussions, distribution of Filipino films to capacity building programs like Post-Production Workshops to elevate the level of filmmaking in the country.

IS THIS LIZA’S RESPONSE TO ERIK'S POST AND filmmakers' COMMENTS?

The post seems to be her response to the post of Erik and the comments from filmmakers about FDCP’s connection to films being shown on Netflix.

Liza said that the deals between film companies and Netflix are private transactions between them.

She added that her July 31 Facebook post was to share the good news after Netflix informed FDCP about the 15 Filipino films to be shown on the platform.

She explained, “We got a lot of inquiries about the post on NETFLIX. Normal lang because our content producers are always looking for platforms to showcase their content.

“These acquisition deals are private transactions between companies and NETFLIX. And we are happy that our local distribution companies are engaging with these international companies to expand their audience.

“We were informed by NETFLIX yesterday about these local licensing deals so we are sharing the good news:)

THE 15 FILIPINO FILMS ON NETFLIX

Here are the details of the new 15 Filipino films that will premiere on Netflix in August and September 2020.

KUNG PAANO SIYA NAWALA (English title: How She Left Me)

LOVE THE WAY U LIE

TAYO SA HULING BUWAN NG TAON (English Title: Us, At The End Of The Year)