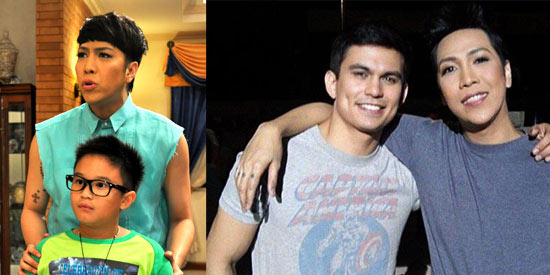 It is unknown when Filipino comedies will do away with the ubiquitous kidnapping scenes and predictable dance numbers, nevertheless, The Amazing Praybeyt Benjamin succeeds in bringing its signature humor to entertain movie audiences young and old alike in the 40th Metro Manila Film Festival (MMFF).

In Praybeyt Benjamin 2, Vice Ganda’s character Benjie is now an international celebrity, having used his heroics to save the world from a zombie attack. Because he has allowed success to get in his head, Benjie is subjected to disciplinary action by the military.

He is now under the authority of commanding officer General Wilson Chua, played by Richard Yap. His important assignment: to gain the confidence of a brat kid named B2 (played by Bimby Aquino-Yap), the General’s estranged child who holds the secret to the locations of terrorist bombs set to go off in the Philippines.

This MMFF 2014 entry makes you feel all sorts of emotions all at once: delight at the witty exchange of lines between Vice and Alex, sympathy towards Bimby who lost his mom and eventually finds a friend in Vice Ganda, and surprise at the lengths Richard would go to portray his role.

Tom Rodriguez as the villain Janjaranjan is a revelation: his acting is reminiscent of Sam Rockwell, who portrayed the enemy Eric Knox in 2000’s Charlie’s Angels. Janjaranjan is terribly evil but obviously very weak, and his refusal to accept defeat eventually leads to his downfall. Even Tom’s fight scenes are worth a second look.

Alex tries to steer clear of looking and sounding like her older sister Toni Gonzaga, and successfully establishes her own brand of acting in the movie. She wears one costume for the duration of the movie (her yaya uniform), but one hardly notices that as she sharply shoots off her lines, some of which are obvious but effective adlibs.

Kris Aquino makes a cameo appearance as Bimby’s mom, and allusions are inevitably made to her own MMFF entry this year, Feng Shui 2. Bimby himself has shown improvement in delivering his lines since his movie debut in My Little Bossings last year. His camaraderie with Vice off-screen is noticeable in their scenes together.

Save for one loophole in the plot – the conflict between Bimby and the father he feels never really loved him remains unresolved – Praybeyt Benjamin 2 is worth your couple of hours at the cinema this holiday season. That is, if you are not looking for a lesson in history, a love story, or a good scare, and would settle for a light and funny action comedy.

Vice and Direk Wenn Deramas’ tandem has already raked in millions at the box office with the Praybeyt Benjamin franchise, and the MMFF has yet to wrap up its first week. Do we see a third movie in the horizon? The possibility is not too far-fetched.

Watch the post-credits snippet to get a peek at the next assignment the Praybeyt-turned-Colonel Benjamin Santos VIII is only too willing to accept.

The Amazing Praybeyt Benjamin is one of the 8 official entries to the 40th Metro Manila Film Festival.