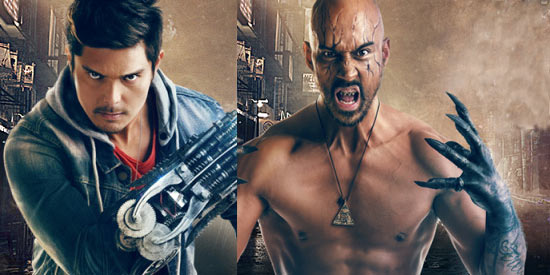 Kubot: The Aswang Chronicles 2 is a wildly entertaining romp about an unlikely alliance between humans and aswangs. Dingdong Dantes (left) reprises his role as Makoy while KC Montero (right) plays an aswang with a sinister plan.

Lately, it seems that one should not take on the Metro Manila Film Festival with lofty ideals of Philippine cinema. In a span of two weeks during the holidays, it seems that most moviegoers (and their families) just want to have fun and not ponder their existence.

Pinoy moviegoers have flocked to hybrids of action, comedy, and drama, sometimes even with horror thrown into the bucket. Realizing that these heady cocktails produce a pleasant buzz, producers have been having a ball shaking up sequels.

Kubot has no great aspirations as a film other than being a wildly entertaining romp about an unlikely alliance between humans and aswangs but it somehow succeeded in lumping together action, horror and comedy into a tasty mix.

Directed by Erik Matti, Kubot picks up the story exactly where Tiktik ended.

After killing off aswangs in the sleepy town of Pulupandan, the film’s hero Makoy (Dingdong Dantes) attempts to escape to Manila with his girlfriend Sonia (previously played by Lovi Poe but now portrayed by Hannah Ledesma), their infant and other survivors of their encounter.

Along the way, they were ambushed by a pack of Kubots, the widows of the aswangs that were killed during the first installment. The Kubots, led by Veron (played by Elizabeth Oropesa), use their long flowing hair as their weapon while their tongues can suck the internal organs of their victims.

Two years later, we find Makoy living a low-key life in Manila. His life is turned upside down again when he meets Lex (played by Isabelle Daza), a doctor with a hidden talent.

Makoy crosses paths again with Veron in an odd union to defeat a common enemy: an aswang leader Dom (played by KC Montero) bent on transforming humans into aswangs by feeding them hotdogs made with aswang venom and ground up human body parts.

Kubot follows the same format as Tiktik in a way that it employs graphic novel elements and raw aswang action. But Kubot is less centered on the horror elements, focusing instead on an odd brand of comedy that ranges from kooky wit, black comedy to the outright absurd. To stay true to its horror roots, surprises and gore are inserted here and there.

Kubot revolves round a larger world than in Tiktik. In Pulupandan, aswangs are simply monstrous creatures out to get humans, but in Kubot, they live side- by- side humans and are as concerned about peace and survival of their species the way humans are.

Because of a relatively simple and, ahem, silly plot, Kubot has plenty of room to indulge in overt silliness, often straying away from the main plot to sidetrack to various absurdities, but not cloyingly so thanks in part to its interesting roster of characters like the tandem of corrupt and sadistic cops played by comedians Ramon Bautista and Bogart the Explorer.

The newest cast member—Nieves, Makoy’s sister (played by Lotlot de Leon)—blends in so well that it’s hard to believe that she wasn’t in the first installment. Her bravado is infectious even as she shouts to the high heavens, “Tandaan mo, may b*yag ang nanay mo!”

Dingdong Dantes brings a world-weariness to Makoy but he does summon the “balls” to fend off Aswangs 2.0 (the supernatural creatures training to be impervious to salt and Holy water).

Isabelle Daza, on the other hand, is formidable in the fight scenes of the movie but when it comes to dramatic moments (like the time when she had to deal with the loss of her loved ones), she is unable to project the depth of the emotions required in the scene.


Lotlot and Joey Marquez are both scene-stealers in this action comedy film, which is why it’s not surprising to learn that they were named as Best Supporting Actress and Best Supporting Actor, respectively, during the awards night.

The visual effects in Kubot also has marked improvement from Tiktik, the aswang fights are more riveting, the gore more cringe-worthy. They are truly deserving to win the Best Visual Effects award this year.

As a whole, The Aswang Chronicles has great promise of being a profitable franchise as the possibilities for new tales of Makoy and the aswangs are endless.

Now that a love-hate relationship between Makoy and the aswangs have been established, their paths may cross again and again, new monstrosities may be hatched.

Linger for a bit after the movie to watch the extra scene that lays the groundwork for the third installment of The Aswang Chronicles.


Kubot: The Aswang Chronicles 2 is one of the 8 official entries to the 40th Metro Manila Film Festival. It is graded A by the Cinema Evaluation Board.