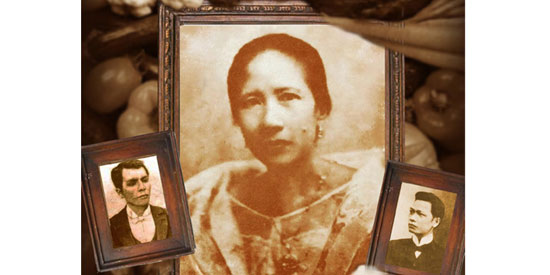 Two directors partner with the Philippine Commission on Women to make a film on Andres Bonifacio's widow, Gregoria de Jesus or Oryang.

Gregoria de Jesus, heroine of the Philippine revolution, gets immortalized on the silver screen through a film titled Lakambini (Woman Leader).


Two directors will collaborate for this period film that comes at the heels of the 2014 Metro Manila Film Festival Best Picture winner Bonifacio: Ang Unang Pangulo.


Lakambini will be helmed by Jeffrey Jeturian (Ekstra, Kubrador, Bridal Shower, Pila-Balde, Tuhog) and Ellen Ongkeko-Marfil (Boses). The screenplay of Lakambini, which won first prize in the 2014 Palanca Awards, is by Hall of Famer Rody Vera.

Direk Jeffrey has just completed a successful two-year run of ABS-CBN's daytime teleserye Be Careful With My Heart and is currently helming Dream Dad. Meanwhile, Direk Ellen is marking the seven-year anniversary of her acclaimed advocacy film Boses, which continues to be screened in schools, churches, government agencies and other venues here and abroad.

Referring to the recently shown Bonifacio: Ang Unang Pangulo and the upcoming Heneral Luna, Direk Ellen says, “We are excited to be making this history-themed film, and we’re glad the genre is enjoying a resurgence lately. We hope to contribute to the effort of reaching out to the younger generation.”

Known as the “Mother of the Philippine Revolution,” Gregoria de Jesus who is celebrating her 140th birth anniversary this 2015, was wife to Katipunan leader Andres Bonifacio.


Oryang, as she is nicknamed, fulfilled many sensitive and dangerous missions for the organization. When she entered the Katipunan, she took the symbolic name of Lakambini. She was entrusted the important work of guarding the Katipunan’s documents, seals, paraphernalia and revolvers. After the death of Andres through execution, Oryang found love again in the person of another Katipunero, commander-musician and Bonifacio’s trusted aide Julio Nakpil.

The seeds of the project were planted in 2012 when Direk Ellen contacted Rody to write a script about the life story of Oryang. Serendipitously, Gregoria’s London-based granddaughter Jamie Oakes, a friend of both Ellen and Rody, was visiting Manila and she brought them immediately to Bahay-Nakpil to do research.

The screenplay is based on information culled from historical documents, and interviews with various descendants whose fondest memories of their Lola Gorya included her cooking. The film traces her story from her adventures with Andres to her married life with Nakpil, as she mixes ingredients of various dishes she prepared daily for her family.

“Through this, we hope to unravel the secrets of our history, and hopefully, the secret to our future,” adds Direk Ellen who elaborates that she was motivated to bring Oryang’s bio to the big screen because it is a story that needs to be told. “I thought that this is one perspective that has not been fully threshed out, one story that has not had closure,” she explains.

In spite of his busy schedule as a TV and movie director, Direk Jeffrey accepted Direk Ellen’s offer to collaborate because of the script and the nature of the project. He says, “It’s going to be my first historical film. It’s not everyday that you get hold of a story like this that has a big value in terms of nation building and civic consciousness.”

To be produced by Erasto Films, Lakambini is currently in its pre-production stage and will begin principal photography by the first quarter of 2015.


This early, the film has gotten support from the Philippine Commission on Women (PCW). In a statement, PCW Executive Director Emmeline Versoza said, “PCW is one with Erasto….it is high time to highlight the roles and contributions of women in the records of Philippine herstory through film.”