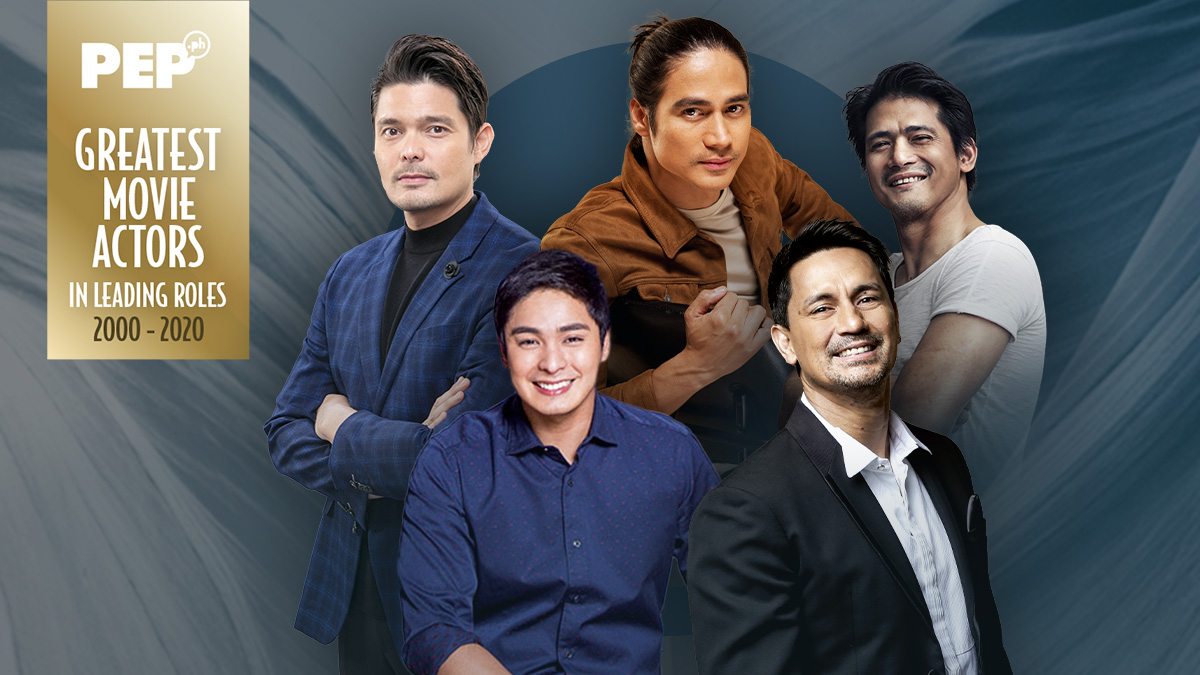 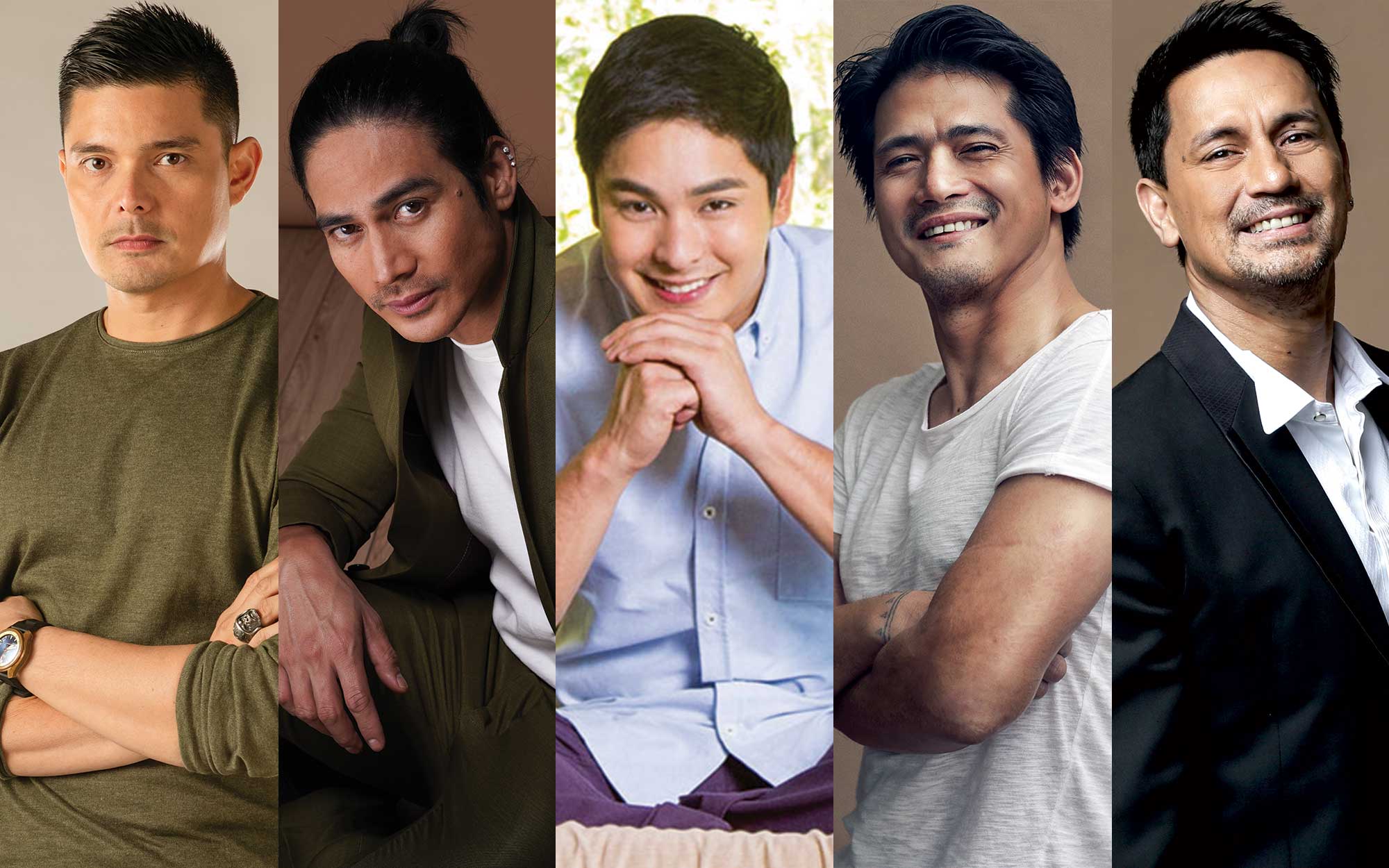 This is the Philippine Entertainment Portal's list, and to come up with the Top 15, we set the following parameters: We would stick to the actors' body of work in film. We would therefore not be considering their teleseryes and stage appearances, no matter how prominent. They would have to leave their mark in movies.

The years covered straddle 2000 to 2010 and 2011-2020. During these two decades, the actors' assignments would have to be as leading men—preferably in mainstream films. Their supporting roles would not carry weight.

In other words, someone may be able to cite actors who did spectacular work in particular films compared to some actors ranked higher than they are. But, the number of assignments can even out that edge. That is, if one actor has 10 movies in which to shine through the two decades, then he has a bigger chance of moving up the rankings than another actor who shines in three leading roles in three movies over the same period.

Or, some actors may have done significant, unforgettable work outside the period of 2000-2020. With their work, they may even have earned the tag of modern-day icons. But if these roles occurred in films that came before 2000, they would not be considered. Conceivably, a younger actor with fewer unforgettable roles may rank higher largely because these limited unforgettable roles happened within the period set by the parameters of this list.

A list of the greatest actors will, of course, be a matter of taste. There is no exact science to this—and, quite honestly, it is probably better for the craft of acting that there is none.

All the same, it matters that taste be informed by reason, and even by data. Unexplained personal likes and dislikes must give way to informed opinion, facts and figures, insights, and intuitive judgment. To get to the point where the team could have the confidence of its choices, all 11 team members were enjoined to review the actors' performances where and when they could over the next five months, starting November 2020.

In the meantime, through five major Zoom meetings that ended in early April 2021, we challenged each other's choices with discussions and demands for explanations and even a show of examples. We also encouraged a further review, via various streaming apps, of the films where the actors appear. Admittedly, the ensuing exchange of ideas often became impassioned.

But in the end, the 11 team members came together and voted. This is the PEP LIST of five of the 15 GREATEST MOVIE ACTORS IN LEADING ROLES, 2000-2020. 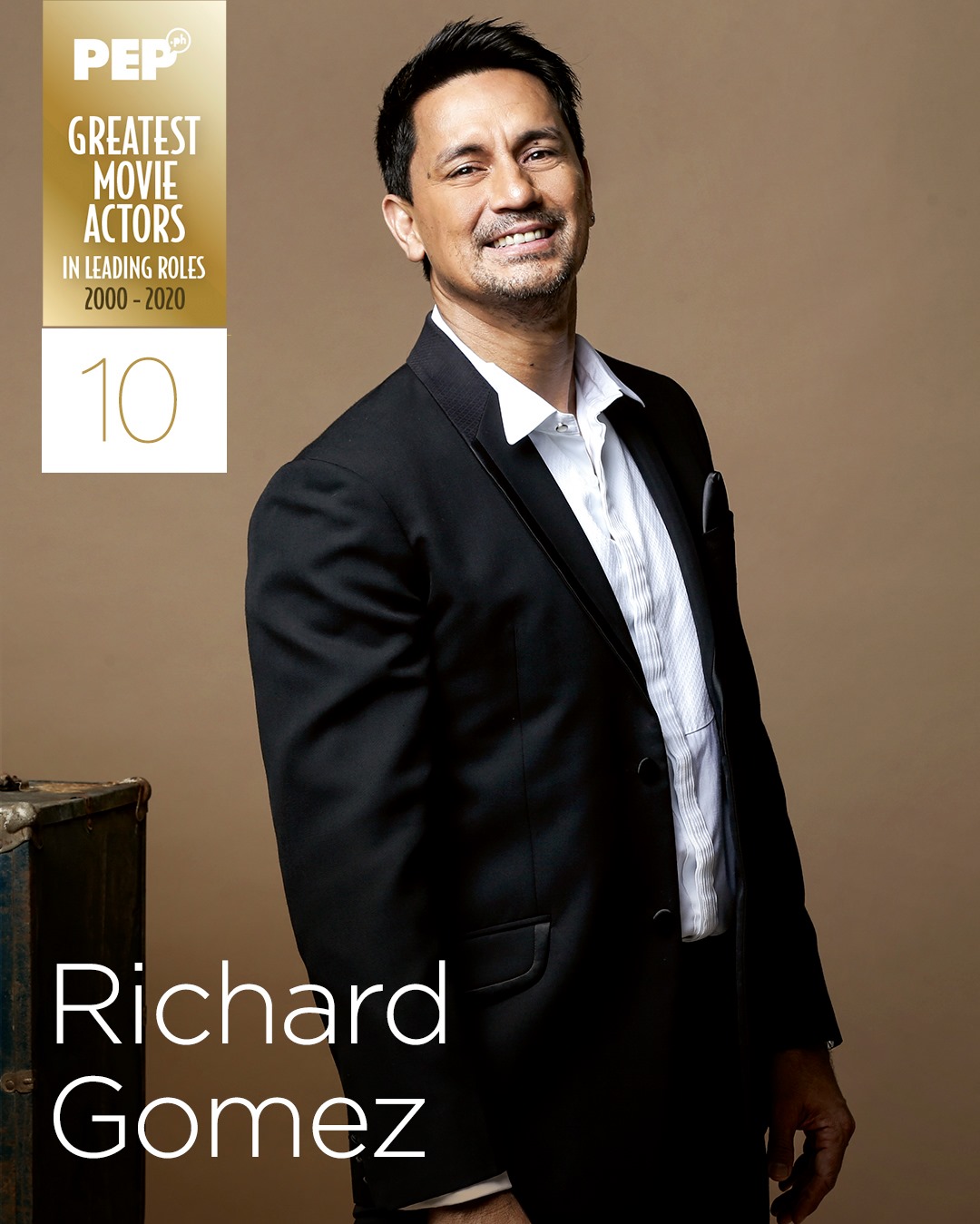 BY KAREN AP CALIWARA
RICHARD GOMEZ’s SCREEN presence has not diminished even if he hasn’t been as active in movies as he is in politics since the year 2000.

He really is a good-looking man even on the big screen where all flaws are magnified. He hogs the screen, too—as Albert in Minsan Minahal Kita (2000), as Ryan in Ikaw Lamang, Hanggang Ngayon (2002), as Vince in The Love Affair (2015).

He mesmerizes even in a father role in She’s Dating The Gangster (2014). I actually applauded his bickering scenes with Daniel Padilla, who played Richard’s son in the movie.

To me, Richard is the ultimate leading man, with the stamp of his own brand of serious acting, not to mention his distinct voice.

In the various roles he portrays for real—as husband, dad, athlete, public servant— Richard makes his presence count in admirable ways. But, good for his audience, the fellow will always be a movie star. 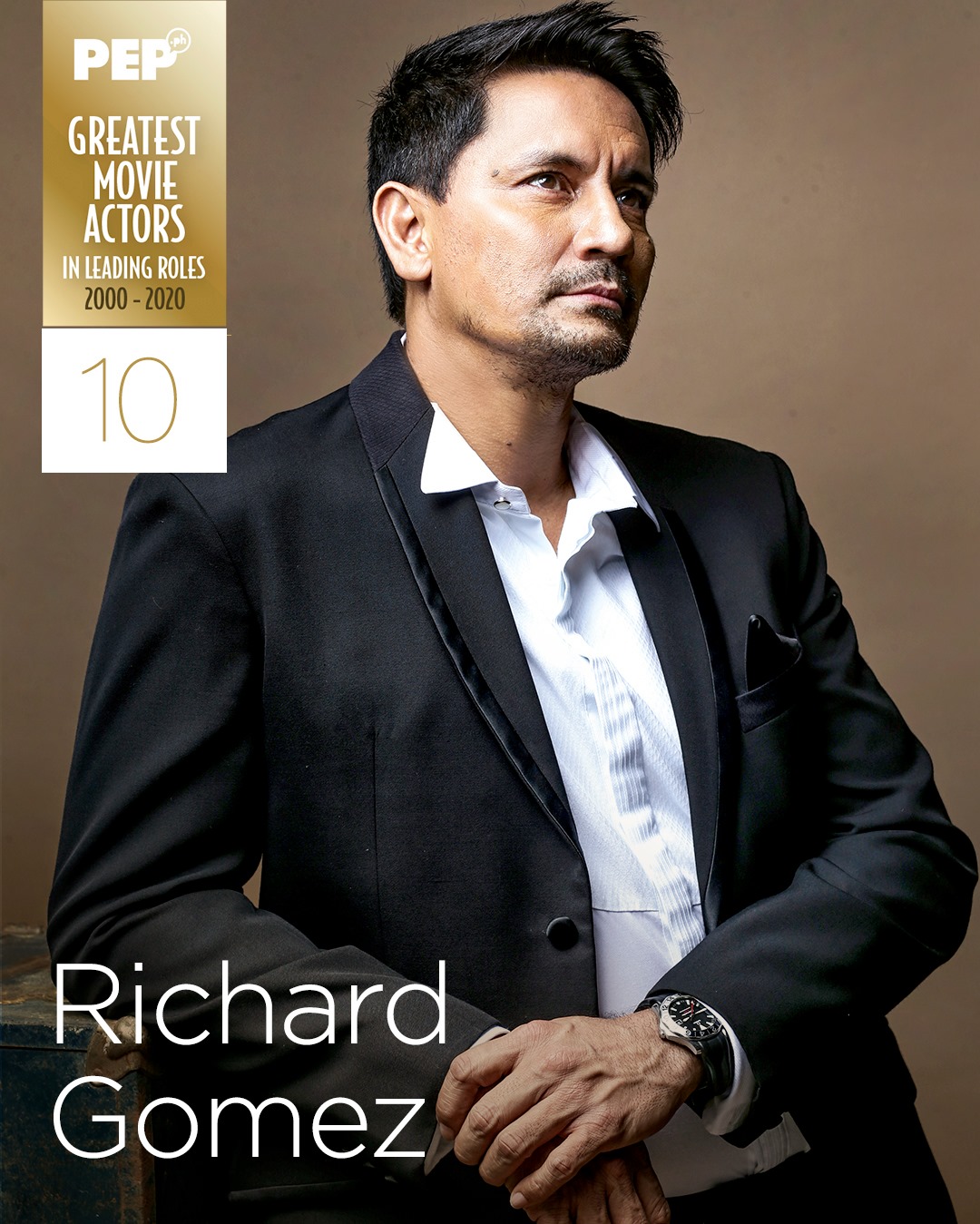 BY BERNIE FRANCO
THROUGH ALL THIS time, Richard Gomez has proven himself the personification of a leading man, kahit ilang taon na ang lumipas at nag-uumpisa nang pumuti ang buhok nito.

His need to survive then becomes more dominant than his need to give and receive compassion. 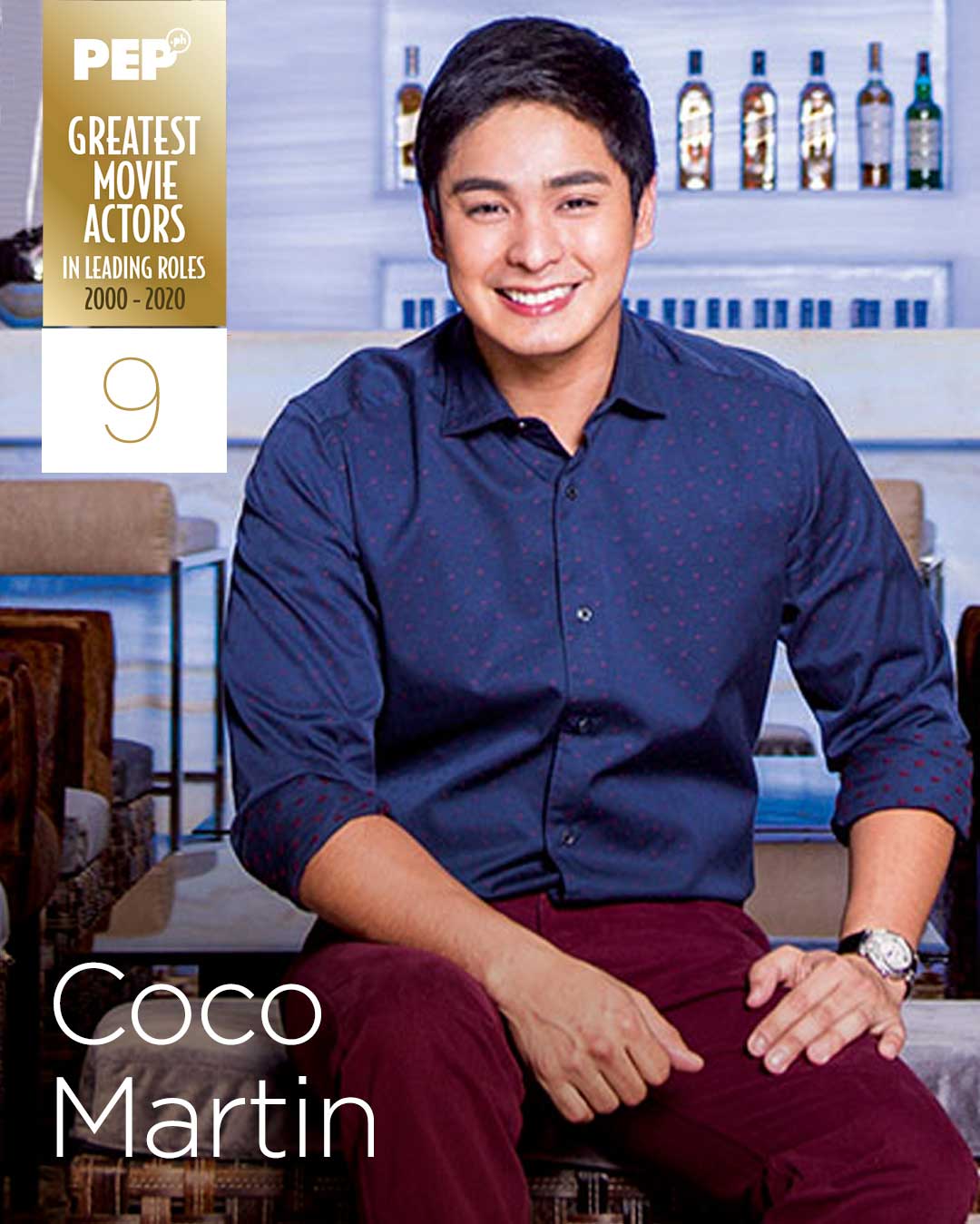 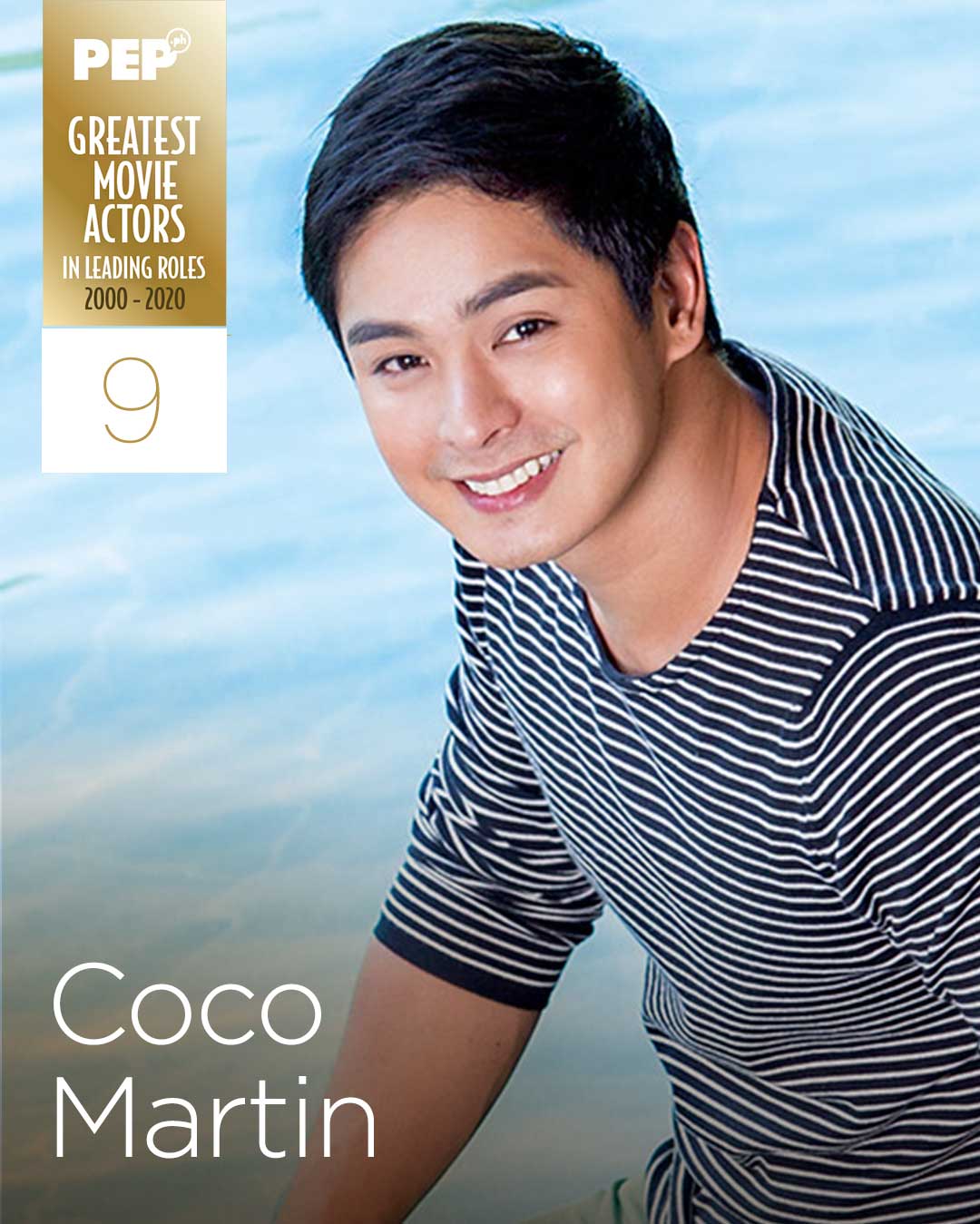 BY CHEZ GANAL
COCO MARTIN IS a star who first gained recognition through the early works of director Brillante Mendoza. Their first project together was Mendoza’s 2005 debut film, Masahista, where Coco's character, to make ends meet, gives massages to gay men.

Coco gave the role the commitment it required.

When the story called for him to sit naked on top of a man and engage in a gay love scene, he did so—with nary a quibble nor a thought about what people might make of it.

Still, Coco managed to balance this intense, even dark, role with a kind of sweetness and a sadness that endeared him to his audience and gave Masahista its saving grace.

Through his eyes alone, Coco managed to gain the sympathy of viewers, and have them suspend their judgment of his profession besides.

In his two succeeding films with Mendoza, Serbis (2007) and Kinatay (2009), Coco found himself hobnobbing with world-renowned filmmakers at the prestigious Cannes Film Festival.

Both films competed and gained international recognition, and participating in the prestigious festival will always be a milestone for Coco that his contemporaries may never get to check in their own bucket list.

It was around this time that Coco began his initiation into celebrity and mainstream showbiz. Mainly, his transformation happened in the world of television, where he started being seen by a nationwide audience as a contrary character in some prime-time drama series of ABS-CBN.

Coco gained even more traction in showbiz after starring in the fantasy series Juan Dela Cruz, which reinvented Coco as a family-friendly star and an idol to kids.

Then, as Cardo Dalisay in the long-running series, FPJ’s Ang Probinsyano, Coco cemented his reputation as an A-list star.

Coco has since embraced this role, and seems to have focused on making family-friendly movies, as shown by his recent films—a collection of kilig romantic comedies, feel-good family stories, and action-filled adventures.

He was goofy and animated in the movies Beauty and the Bestie (2015) and The Super Parental Guardians (2016).

Then he brought action—already his TV niche via FPJ's Ang Probinsyano—back to the big screen with Ang Panday (2017), also an FPJ trademark; Jack Em Popoy: The Puliscredibles (2018); and 3pol Trobol: Huli Ka Balbon! (2019).

Although he is a bonafide celebrity today, whose current movies may not be as thought-provoking as his early projects, Coco remains an actor highly committed to his craft.

At least that's the only explanation outsiders can give about his behavior in Ang Probinsyano. it is widely known in the industry that he becomes so engaged, he sometimes takes over the writing and the directing, not to mention continuing to play the lead role. 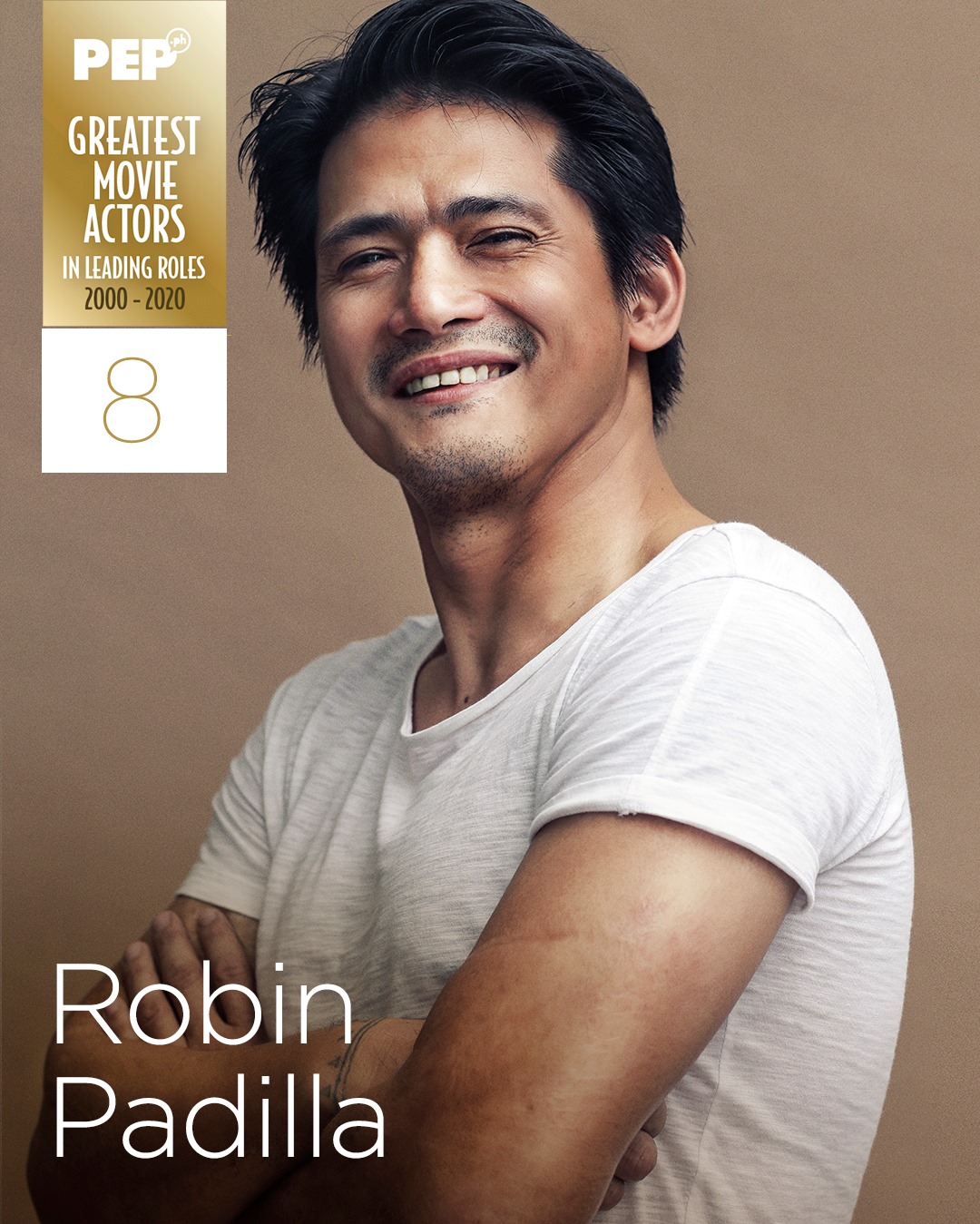 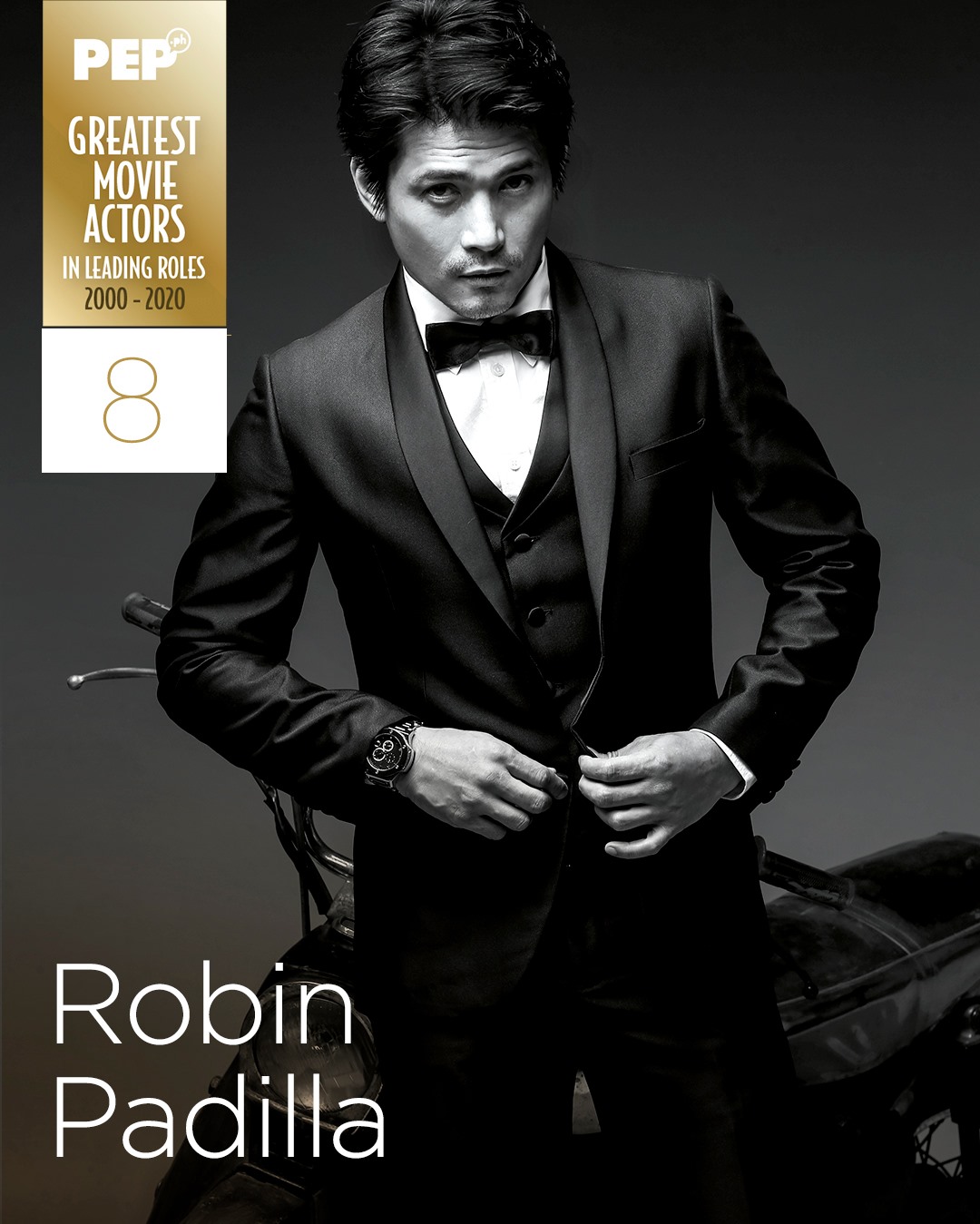 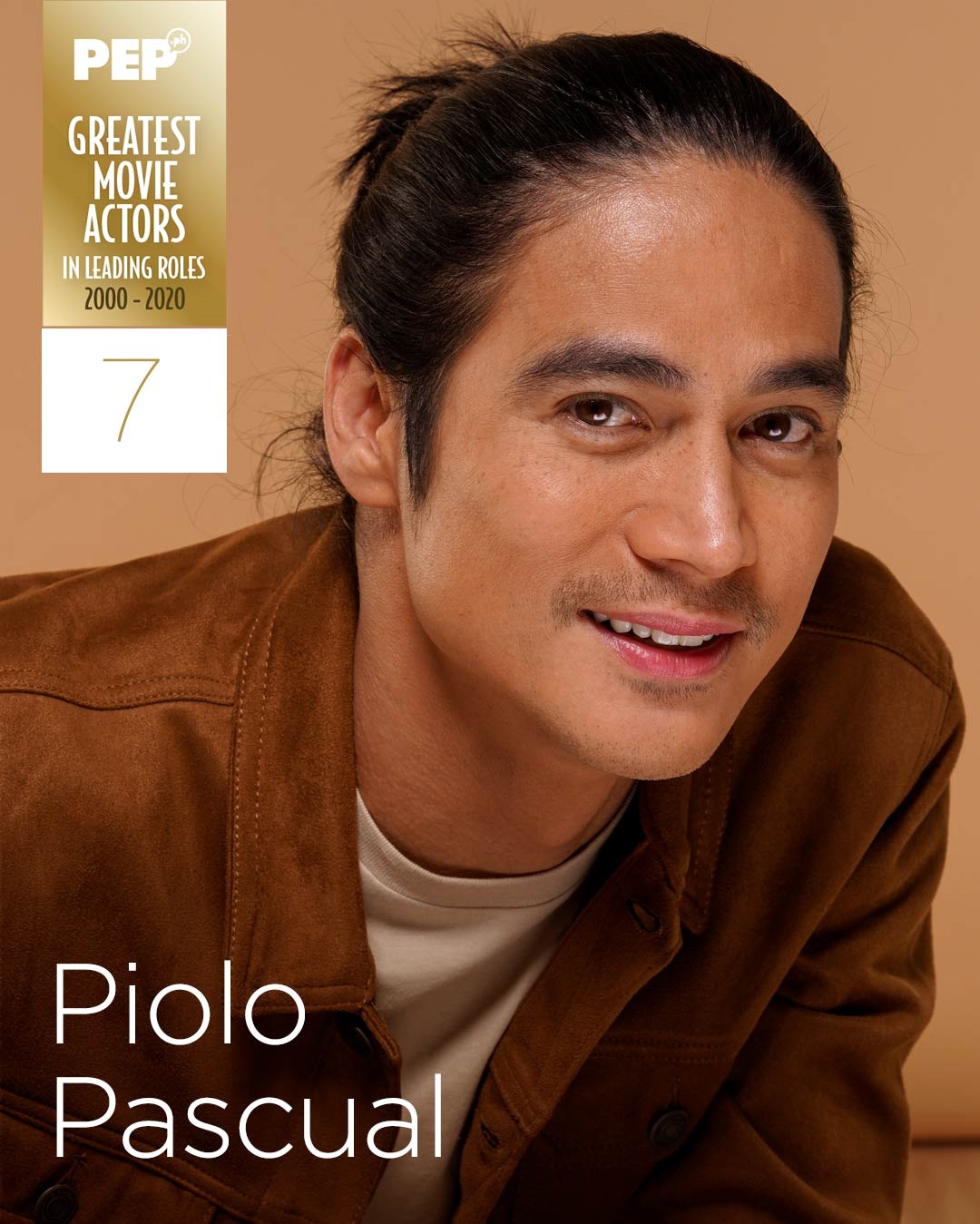 BY NIKKO TUAZON
Adept at various acting genres, Piolo Pascual has long proven himself as an actor to be reckoned with on television and in movies.

He was just starting his career when he landed the lead role in the Mel Chionglo film Lagarista (2000) as Gregory, a young man who delivers film reels from one movie theater to another on a bicycle.

Piolo hit the grand slam in Lualhati Bautista’s Dekada ‘70 (2002), a project from which he tried to back out three times because he felt he was not ready to star alongside veteran actors Vilma Santos and Christopher de Leon.

Dekada ’70 turned out to be the film that would deliver Piolo to the same room as the actors he revered, after he reaped 10 acting awards from different award-giving bodies for his role as Jules Bartolome, an activist physically and mentally tortured during martial law.

Not one to get stuck in roles and labels, Piolo, who has been hailed the “Ultimate Heartthrob,” also proved himself a fine actor in romantic dramas.

He showed a quiet intensity and left audiences in tears as Lino in Olivia Lamasan’s Milan (2004), opposite Claudine Barretto.

As Marco Antonio Villanueva III in Starting Over Again (2014), another Olivia Lamasan masterpiece, Piolo did not just deliver the line, "I deserve an explanation! I need an acceptable reason!" He made the audience feel his desperation.

In moving to still another level of commitment to his art, Piolo immersed himself in the offbeat role of NBI Agent Francis Coronel in Erik Matti’s On The Job (2013), and gave powerful performances in Lav Diaz’s Hele sa Hiwagang Hapis (2016) and Ang Panahon ng Halimaw (2018). 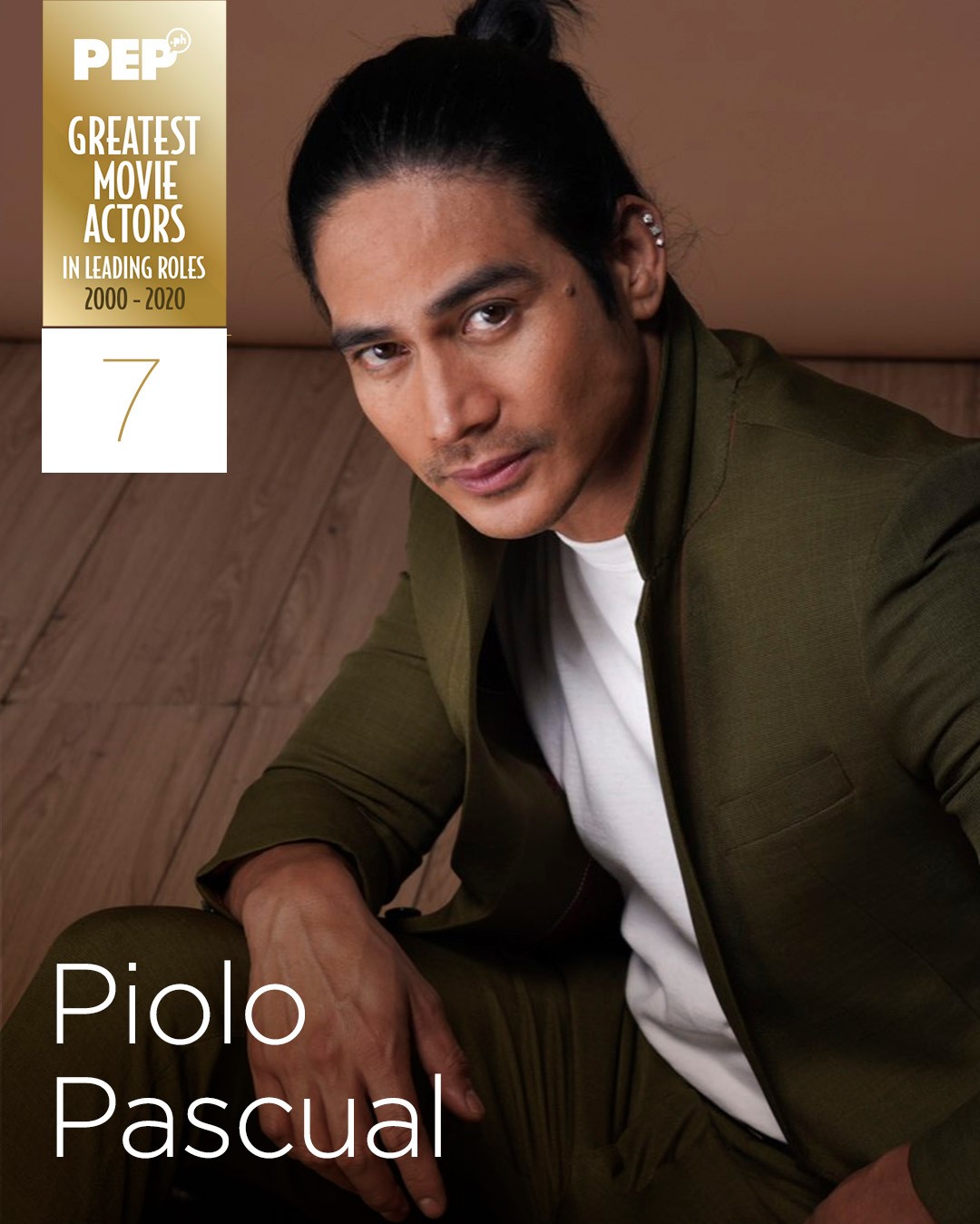 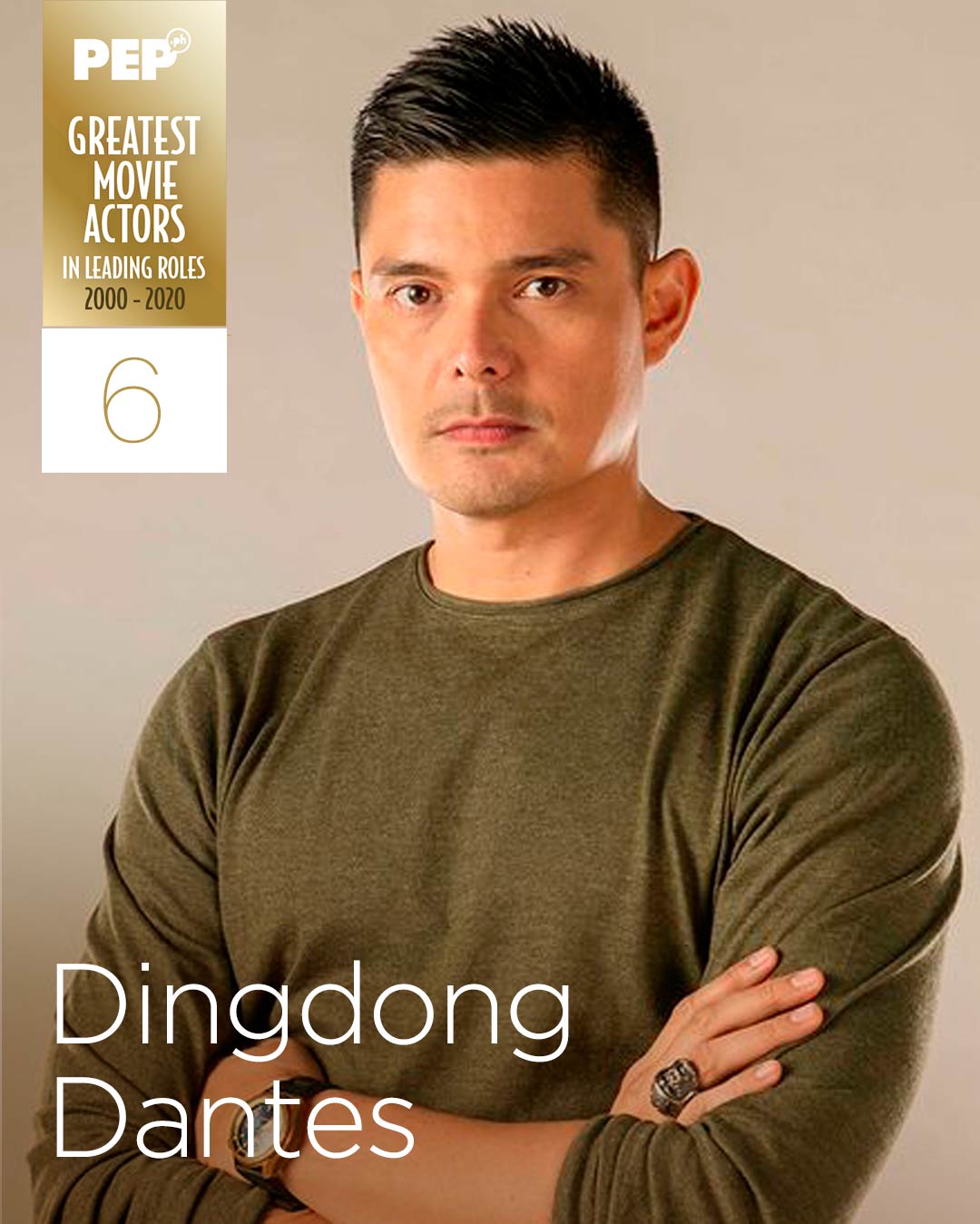 And based on his movies I’ve seen so far, I place Dingdong Dantes in the second category.

Watching him lose himself in the roles he plays, I forget he’s umaarte.

He could be “sungit”—remember Raphael in You To Me Are Everything (2010)?

In Magkapatid (2002)—alongside a formidable cast that included Sharon Cuneta, Christopher de Leon, and Judy Ann Santos—Dingdong, the new kid on the block, held his own.

His short scene with Judy Ann made me sit up. Nakakaarte pala si Iñaki (his role in the TV youth-oriented show T.G.I.S.)!

I knew then that he had the making of a leading man and a lead actor.

What I find remarkable about his acting is that he’s never over-the-top.

Dingdong disciplines himself and puts in just the right intensity in his character. He doesn’t have to shout nor does he have to deliver voluminous lines to leave a mark.

He has an impressive solo moment in Seven Sundays (2017). His character Bryan Bonifacio finally brings out his grievances against his brothers Aga Muhlach and Enrique Gil, and his acting is superb. Galing ng bitaw ng linya. Ganda ng build-up ng emotions.

Dingdong can totally own a character, and I hope that in his upcoming projects he can own an entire film.

Think of Tom Hanks in Castaway or Matt Damon in Martian. Heck, he can even do Magic Mike. 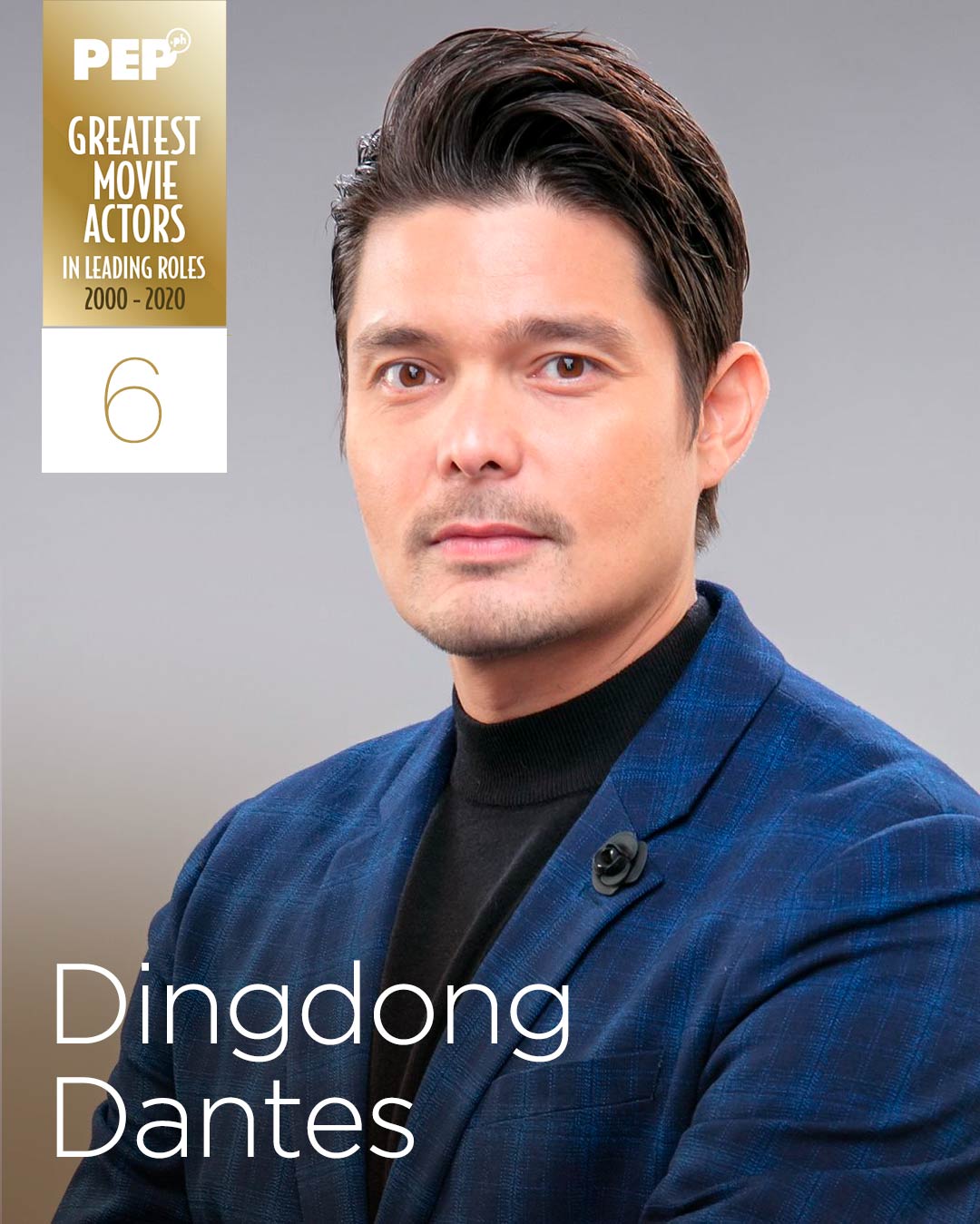