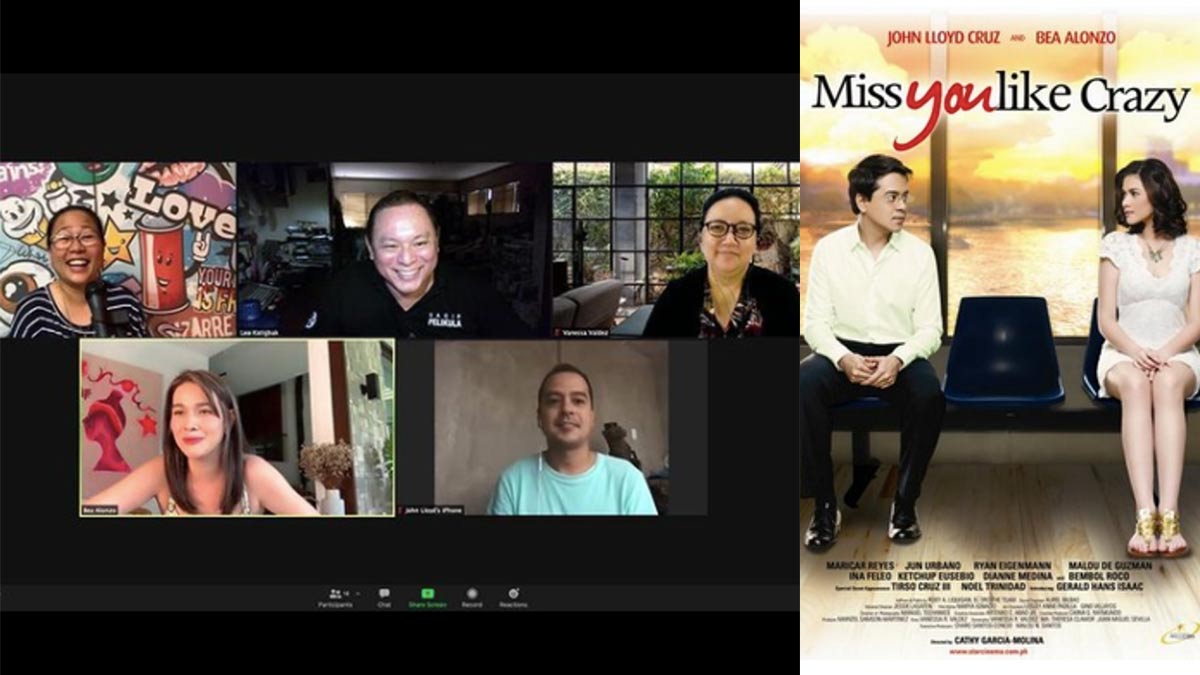 Bea Alonzo and John Lloyd Cruz had a Zoom meeting with director Cathy Garcia-Molina, Sagip Pelikula head Leo Katigbak, and movie screenwriter Vanessa Valdez for the restoration of the 2010 movie Miss You Like Crazy.
PHOTO/S: @lpk325 on Instagram / Star Cinema

However, the meeting was not for their upcoming movie collaboration with Star Cinema, No Goodbyes.

The Zoom session was for the restored version of their 2010 movie Miss You Like Crazy.

Leo Katigbak, the head of ABS-CBN's Film Restoration Project or Sagip Pelikula, took to Instagram with a photo from their Zoom meeting held on Wednesday, June 9, 2021.

Present in the Zoom meeting were Bea, John Lloyd, Direk Cathy, and Miss You Like Crazy screenwriter Vanessa Valdez.

Leo wrote in his post's caption, "Candid moment. The last time the 5 of us were together was for a ONE MORE CHANCE special recording. That time, it was over Italian food and face-to-face. We have to settle for zoom for now but it doesn’t make the moment any less special. It was a wonderful Wednesday indeed with @v_r_v_ , @kaybash1326 @beaalonzo and @johnlloydcruz83"

Vanessa reposted the post on her Instagram story. Her caption read, "It's one of those terribly underappreciated and misunderstood films simply because it was different. Hanging out with these people again made me love even more the very first story for film I wrote for Star Cinema (I wrote the original story in 2004). And it made me miss working with these film greats and working in the old normal.

"Thank you, @lpk325 for restoring and preserving our films. And for finding a way to make our lives intersect once again. It may have been brief and fleeting, like ferries passing each other on the Pasig River. But truly meaningful and transformative. Like the friendship, connection and love Mia and Allan found in each other."

Mia and Allan are the characters portrayed by Bea and John Lloyd in Miss You Like Crazy. 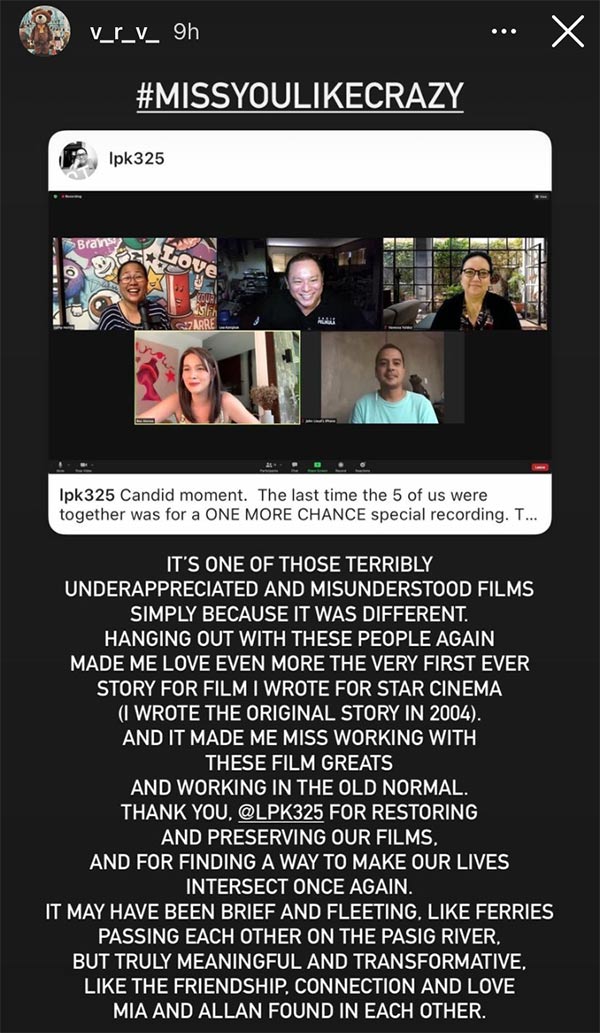 Sagip Pelikula has yet to announce when the restored version of Miss You Like Crazy will come out, including the execution that the lead cast recorded via Zoom.

BEA AND JOHN LLOYD ON GMA-7?

The execution for Miss You Like Crazy's restoration is the first project of Bea and John Lloyd under an ABS-CBN company after reports came out about them transferring to rival network, GMA-7.

This is also John Lloyd's first project with an ABS-CBN company after he announced his showbiz comeback under Maja Salvador's management, Crown Artist Management.

Wowowin host Willie Revillame is also set to pitch a project to GMA-7 under his production featuring John Lloyd. It is said to be a sitcom where he will be paired with Andrea Torres.

GMA Network’s board director, programming consultant to the chairman/CEO, and GMA Films president Annette Gozon-Valdes is also happy with the possibility of John Lloyd doing a project for the Kapuso network.

Meanwhile, rumors are persistent about Bea signing with GMA-7 after she agreed to do a movie with Kapuso actor Alden Richards.

They are set to top-bill the Pinoy adaptation of the Japanese series Pure Soul, which will be produced by VIVA Films, APT Entertainment, and GMA Pictures.