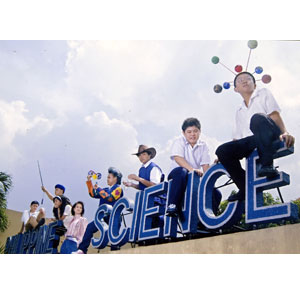 Auraeus Solito's Pisay bagged two awards in the 14th Vesoul International Film Festival of Asian Cinema. The period film will have its regular run at SM digital cinemas from February 20 - 27.

An indie film about eight exceptionally gifted high school students set in the politically volatile ‘80s has been honored in the 14th Vesoul International Film Festival of Asian Cinema.

Directed by Auraeus Solito, Pisay was cited for "good spirit, acting, scenario and direction" by jurors of the film festival considered as one of the oldest and largest Asian in Europe. Pisay won the Grand Prix du Jury (Grand Prize of the International Jury) and the Prix du Public (Audience Prize) during the film festival that took place in France from January 29 to February 5.

Auraeus went to France along with young actors EJ Jallorina, Carl Barrameda, Claudine Najera who played the students of Pisay, which is short for Philippine Science High School. The noted director is actually an alumnus of Pisay; he collated real stories from his classmates who were part of Batch ‘86. Production designer Endi Balbuena also joined the delegation for Pisay.

The film won the Best Director, Best Production Design, and Audience Choice awards in the third Cinemalaya Independent Film Festival held at the Cultural Center of the Philippines in July 2007.

SYNOPSIS. Pisay is written by Henry Grageda and directed by Aureus Solito of Ang Pagdadalaga ni Maximo Oliveros fame. The filmis about eight students who qualify as scholars in the government-run school in Quezon City, spanning the time they enter the school in 1982 until they graduate in 1986. These are turbulent times in contemporary history so the film is not just their story but also that of the nation. Filipinos were outraged by the assassination of Ninoy Aquino in August 1983, spurring them to stage the first EDSA People Power revolution leading to the ouster of President Ferdinand Marcos.


The film is divided into four episodes, each correspoding to a specific year of schooling. "Freshman" is about young love. Gammy Lopez (twin brother of Nathan Lopez who played Maximo Oliveros), an intelligent teener whose mom is a market vendor, falls in love with a balikbayan mestiza. In the process, his grades suffer. Their concerned teacher (played by Eugene Domingo) wants him to enter an Ivy League school in abroad and convinces him to forget about his infatuation with Annicka Dolonious.


"Sophomore" is about an overweight boy from Cebu played by Carl John Barrameda who graduated valedictorian in their hometown and is now bullied by bigger boys in their dorm. He gets so terribly homesick and this affects his performance in class so badly that he is danger of flunking geometry.

"Junior" is about a girl, played by Shayne Fajutana, whose parents are both political activists. To complete an experiment in class, she is paired with a budding cadet played by Jonathan Neri. They develop feelings for each other while working on the story of Macliing Dulag and the Chico River project. However, Shayne's parents are being persecuted by the government so they are forced to leave quietly for abroad. Shayne drops out from Pisay without even saying goodbye to her friends.


"Senior" is about Euripedes (EJ Jallorina), an effeminate boy with artistic flair who discovers that he is more inclined to the arts. Pisay scholars are required to major in science courses when they go to college. If they enroll in other courses, then they would have to pay back the government for the years they spent as Pisay scholars.


This episode opens with a play being performed on stage, with Euri playing the role of Sisa. Euri has a hard time filling up his application form for entrance exams in college because he cannot decide on whether he should take up a science course or the theater arts.


In the end, the tragedy that befalls his classmate and best friend, Elijah Castillo (the child actor who played the title role in Pepot Artista) helps him make a final decision.

These young students find the world outside—erupting into the People Power Revolution in 1986—being replicated within the school as they struggle to graduate, contend with teachers, classmates, family, school officials and a new classification to segregate students into two groups based on their academic ranking.