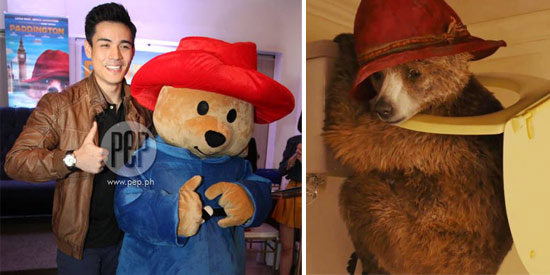 To watch Paddington, one must suspend disbelief. After all, stepping into this universe requires that you believe that people would accept the possibility of a bear that not only speaks but speaks English with an accent.

The story begins with a prologue that sets up the proposition that there is a highly advanced species of bears found in Peru and that a British explorer was able to communicate with them. He teaches them the English language and way of life. He even instructs them how to make marmalade. He invites his new friends to London, promising them a home when they get there.

Flash forward to several years later, the couple is old and taking care of their orphaned young nephew. Tragic events force the young boy to stowaway in a ship bound for London, with a tattered red hat given to his uncle by the explorer and the promise of a home when he gets there.

The beauty of this CGI and live action movie lies not in the seamless graphics but in the heart of the movie. It is so well written that we do not find it silly that this family actually talks to and interacts with the bear, whom they eventually name “Paddington” after the railway station. In addition, the characters are very well written, the backstory lucid, so that we can see the motivation for each.

The storytelling goes beyond mere setting up of scenes to capture dialogue and move the story along. There is a recurring theme of the band that appears in different locations, providing not only a soundtrack but also echoing the protagonist’s current emotional state. The flashbacks are seamless and very vital. They also slowly reveal emotional aspects of the characters.

There is the use of a miniature house to show the difference of each person in the Brown family, moving from how they were before meeting Paddington then moving on to the changes that Paddington has somehow made on each of their lives. The production design is rich. The rooms of the Brown family members are unique and reflect each one’s personality. Even the interiors of the different houses and buildings are visual feasts.

There are many scenes that made us laugh out loud. Watching this with children ignited the child in us too. And you don’t even need to be a fan of the children’s books that were first released in the UK in 1958.

Nicole Kidman, as the antagonist taxidermist, does a portrayal reminiscent of Glenn Close’s Cruella Deville. Even her attempt to catch Paddington reminds us of scenes in Mission Impossible and Home Alone. Her seeming cold portrayal eventually gives way to her strong motivation beyond money or fame.

The much-hyped Xian Lim voiceover of Paddington is unique to the Philippines since other releases in different countries also utilized their own actors. It is unclear whether he is trying to stay true to the British accent, which he loses in sections of long monologues. When this happens, it is unmistakably and distinctly Xian. Surely, his fans will find this a good motivation to come out and see the movie.

Still and all, the British film gives not only a beautiful panorama of London in different seasons, but also lightly leads us to look deep into our hearts and find the beauty of finding a home where the heart is.