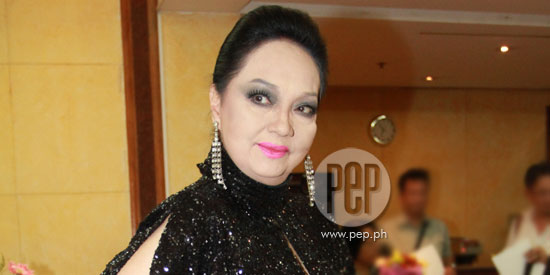 Celia Rodriguez is recipient of the Nora Aunor Ulirang Artista Lifetime Achievement Award to be given out during the Star Awards for Movies.

Born Maria Cecilia Rodriguez (on March 17, 1938), in Irosin, Sorsogon (Bicol, Philippines), the actress will turn 77 years old nine days after being named an "Ulirang Artista" by the the Philippine Movie Press Club (PMPC).

Superstar Nora Aunor was pleased to know "Mommy Celia" will be this year's recipient of the special award named after her.

Nora fondly recalled: "Manay Celia has long been a friend and adviser to me, since wayback [in the early '70s]. Remember, she co-starred with me in my third film, as movie producer, Super Gee!"

The 1973 Komiks-serial action trilogy, written by Zoila and directed by Armando Garces, had Celia Rodriguez playing a counterfeit money syndicate head, operating in a haunted house to give the episode a "horror" touch.

Nora and Celia's acting collaborations didn't end with Super Gee. In succeeding decades, the two award-winning actresses found themselves assigned in roles significant enough for them to sink their teeth into, so to speak: such as Palengke Queen (1982), directed by Freddie Sarol and Armand Reyes; Bulaklak Sa City Jail, written by Lualhati Bautista, directed by Mario O'Hara; and Naglalayag (2004), written by Irma Dimaranan, directed by Maryo J. delos Reyes.

The partnership, though not seen regularly through the years, proved successful and meaningful at best, as Nora and Mommy Celia have developed a kind of friendship that lasts, though they seldom see each other.

One could only recount the times both Mommy Celia and Nora had a more regular screen appearance, when the superstar-actress did her first TV drama series (teleserye) lead-starrer, Bituin, which was aired between November 2002 and May 2003 on ABS-CBN.

Nora Aunor was the lead female protagonist; the martir and api-apihan Laura Sandoval to the scheming Donya Virgina Gaston, a role that befitted Ms. Celia Rodriguez (known as Manay Celia to close friends).

GLAMOUR PERSONIFIED. In fact, the past two years saw Mommy Celia essaying TV drama roles characterized as affluent or rich, but not necessarily the "bitchy" woman her younger screen persona has been associated with.

Celia's latest women of affluence roles were seen in Ilustrado and Hiram Na Alaala, both aired on GMA-7 which has been home to Celia Rodriguez for most of her drama series since the late 1990s.

When she started doing teleseryes, as a Kapamilya in 1996, via Familia Zaragoza (then directed by the late Khryss Adalia); and as a Kapuso, in 1998's Halik Sa Apoy, Celia was at once Donya Elvira and Donya Tuding, respectively.

"Maybe it goes with age and maturity; or the kind of status she has earned for herself," said a staunch Celia Rodriguez supporter.

Another colleague added, "I may not have been an avid fan of Celia Rodriguez, but the way I see it, she has outlasted even some movie queens and top actresses of their time, with the way she takes care of her body.

"She was, after all, the most glamorous Valentina to Vilma Santos' Darna [in the 1973 Lipad, Darna, Lipad, Joey Gosiengfiao episode]


LEAD AND SMORGASBORD ROLES. But a lead role in commercial cinema, for a character actress like Celia Rodriguez, comes very few and far between.

One such memorable role, was that of a 1930s Hollywood-inspired sex-drama, La Paloma (Ang Kalapating Ligaw) which her director-friend, Joey Gosiengfiao, did for Ms. Celia, and actor-ward Orestes Ojeda.

Tita Angge, as she is more popularly known, is currently Nora Aunor's manager (along with German "Kuya Germs" Moreno).

Also during the 1970s, the era of the so-called "bold" movies, Celia did a number of sex-oriented films; including Huwag Tularan: Pito Ang Asawa Ko (1974) directed by Ishmael Bernal (for VP Pictures) and Huwag Kayong Maglaro Ng Apoy [directed by the tandem of Gosiengfiao and Elwood Perez, for the indie film outfit, Juan dela Cruz Productions], which was banned for exhibition by the local Board of Censors (long before the MTRCB came to being).

To many film enthusiasts, though, Mommy Celia's endearing persona, as character actress, was made worthy by her enigmatic presence in many significant films, by actors and directors of note.

For one, Lino Brocka's Angela Markado (1980) was memorable, because of Hilda Koronel, but without Celia Rodriguez' "prostitute-with-a-heart-of-gold" character, the film wouldn't be as significant.

Also, Susan Roces won her first ever FAMAS best actress award, for Celso Ad Castillo's Maligno (1977), in which Celia Rodriguez was unforgettable, like the iconic Eddie Garcia, as a "devil incarnate".

FUNNY ANECDOTE. The artist in Celia Rodriguez has long surfaced on the big screen. She started her movie career in the late 1950s, with such veritable "obsure" movies such as Sa Ngalan Ng Espada and Shirley, My Darling, which were both shown in 1958.

Of course, Celia Rodriguez was no movie queen of her era; she started during the decade of acknowledged Movie Queens (of the '50s), Nida Blanca and Gloria Romero; and at the time when the likes of Charito Solis, Marlene Dauden, Rita Gomez and Lolita Rodriguez were the prime drama queens and acting stalwarts.

But the mid-and-late-1960s also saw a formidable actress in Celia Rodriguez. She was named Best Supporting Actress by the FAMAS Awards (the only existing award-giving body back then for the local movie industry), for the 1964 Gerry de Leon horror masterpiece, Kulay Dugo Ang Gabi (Blood Is The Color of the Night). Gerry, who was later named National Artist for Film, helmed this movie with Amalia Fuentes in the lead role.

In 1967, when Nora Aunor first became a household name, after being declared champion at the Tawag Ng Tanghalan national amateur singing contest (aired on ABS-CBN), Celia Rodriguez had already won her second Best Supporting Actress award, also from the FAMAS, for another Gerry de Leon film, The Passionate Strangers.

In 1971, Nora Aunor's superstardom was at its peak; while Celia Rodriguez's reputation as top-calibre actress was in full bloom, with her first FAMAS Best Actress award (her third acting trophy) for another Gerry de Leon film, Lilet (1971).

Notwithstanding opposition from a very outspoken actress, the late Ms. Rita Gomez, who reportedly refused, at first, to hand over to Celia Rodriguez the FAMAS trophy the latter had won.

Good thing, civility prevailed and Celia Rodriguez was spared from further embarassment, as she finally clutched her prized award and delivered her acceptance speech as Best Actress.

To this very day, nobody had questioned Celia Rodriguez, being a FAMAS best actress winner for Lilet. Nor for her succeeding awards, won through hardwork and sheer artistry: as Best Supporting Actress, for a Mario O'Hara film, Bulaklak Sa City Jail, incidentally another Nora Aunor-starrer, at the 1984 Metro Manila Film Festival.

Around 19 years later, Celia was to star in a memorable tearjerker. Titled Magnifico (2003), this indie film which made the rounds of international film fests is considered as Maryo J. delos Reyes' finests films. Written by Michiko Yamamoto, Magnifico tells the story of a poor boy (Jiro Manio), who changed the lives of rural folks, including that of an old and wicked woman-recluse, portrayed so convincingly by Celia.

It was a departure from Celia's glamorous and 'Donya'-portrayals, but it earned critical acclaim for Celia Rodriguez, who won an Urian nomination and her third Best Supporting Actress award (from the FAMAS).

WINNING TANDEM. Incidentally, this year's recipient of another special award from the PMPC Star Awards for Movies--Director Maryo J. delos Reyes--has done a number of memorable films, with Ms. Celia Rodriguez among the cast.

Through the years, Maryo J. delos Reyes' collaboration with actor, Celia Rodriguez, has been very fruitful and worthwhile, to say the least.