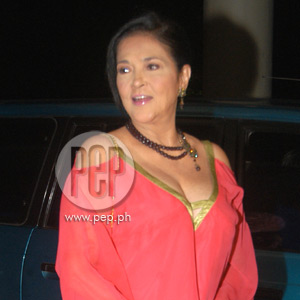 Gina Pareño was unable to attend the New York Television Awards last February 2 because she was shooting the film Ploning in Cuyo, Palawan. However, she was able to go to the Big Apple when she attended the screening of Kubrador in the Museum of Modern Art.

Gina Pareño recently went to the United States to attend the screening of Kubrador, which was chosen as the opening film of the traveling film festival, Global Lens Series 2008. The film about the illegal numbers game called jueteng was screened at the Museum of Modern Art (MOMA) in midtown New York last January. Kubrador was one of 10 films chosen from Asia, Africa, Latin America and the Middle East to be shown for a week in major cities across the United States.

When PEP (Philippine Entertainment Portal) visited the set of Ploning in Cuyo, Palawan, the veteran actress narrated her experience while representing the Philippines in the Big Apple. She plays the role of Intang in Ploning, which is expected to open in theaters nationwide this April. In Kubrador, she is the aging bet collector (known locally as kubrador, hence the title of the movie).

PEP also learned that she was unable to attend the New York Television Awards last February 2 because she was shooting the film Ploning in Cuyo, Palawan. Maaalala Mo Kaya was nominated for Best Drama for the episode "Rehas" wherein she played a mother forced to build cages for her three psychologically disturbed grown-up children.

NY-STYLE CELEBRATION. The Philippine Consulate General in New York, in cooperation with Global Film Initiative hosted a reception at the Philippine Center for the Filipino community to celebrate this event with the cast and crew of the much-awarded film.

Here is the first-hand account as written by Tino Aquino Capili of Jersey City, New Jersey:

"Chosen as the opening film of the Museum of Modern Art's (MOMA) Global Lens 2008 in New York, Kubrador has garnered several awards in various international competitions. For Gina, it has made possible her receiving three Best Actress international awards, tying her with Superstar Nora Aunor and I guess the only local star to have clinched that feat.

"No less than [Philippine Consul General to New York] Honorable Cecilia Rebong took time to meet and play gracious hostess to the delegation from the Philippines and everyone who came to congratulate the people behind the highly successful film. She spoke briefly on the history of Philippine movies and the significant personalities who have helped shape the landscape of the country's film industry. Director Jeffrey Jeturian and screenwriter Armando Lao gave a background of the movie and answered questions from the audience.


"When a male guest, not of Filipino descent, asked what jueteng was, Consul General Rebong gave a very vivid explanation. This prompted Direk Jeffrey to joke that she must have played jueteng when she was still in the Philippines. To this, the Consul General genially replied that she never did since jueteng is illegal in the country but that as a Consul General, it is her business to know what is illegal and what is not.

"[After the program], during our conversation outside while watching people passing by 7th Avenue, Gina mentioned how fulfilled she feels now as an actress because of Kubrador. I could sense indeed the sense of accomplishment in the way she spoke. She even reacted in childlike excitement when Susan Weeks Coulter told her she had a nice write-up that appeared in The Sun New York. She said she clipped from all the newspapers and magazines every article about her and the movie and wondered where she could ever get a copy of The Sun. I volunteered to look for a copy but did not find one unfortunately. I promised her, however, that I would send her a copy by mail if I found one."

Kubrador is part of the year-long tour in over 30 cities across the United States.

Ms. Gina Pareño is now considering a part in Brillante Mendoza's upcoming film titled Servis. The noted director tells PEP that Gina's character is the mother of Cherry Pie Picache. Their characters operate a third-rate movie house in the province while they live inside the theater.