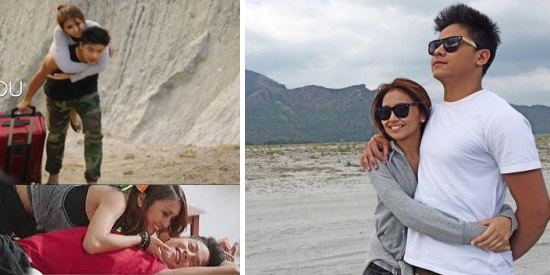 Crazy Beautiful You, starring Daniel Padilla and Kathryn Bernardo, knows how to entertain with enough humor and cheesy onscreen romance to be worth your time.

Mae Cruz-Alviar’s Crazy Beautiful You can be described in the length of a tweet: Rebellious Rich Girl reluctantly goes to poor community. She meets Responsible Poor Boy and falls in love. Some conflict happens. But all is well in the end. #KathNiel.

It sounds rudimental and elementary and quite honestly, something we’ve seen and heard of a million times before. But do not let this discourage you. This latest installment in the KathNiel hype train knows how to entertain with enough humor and cheesy onscreen romance to be worth your time.

The film starts off with a reckless, drag-racing rich girl named Jackie (Kathryn Bernardo) self-destructing her way into a jail cell. Her separated parents argue and decide that it’s best for her to go on a medical mission with her mother (Lorna Tolentino) in one of the remote villages in the province of Tarlac. The idea is for Jackie to finally understand the meaning of responsibility and that if she manages to finish the entire program, she can go on to study in New York City and live free for the rest of her life. Along comes Kiko (Daniel Padilla), an illegitimate son of the mayor (Gabby Concepcion) living selflessly for his siblings and helping Jackie’s mom with her medical missions in the poorest areas of the region. Kiko is tasked to take care of and “straighten out” the wild child that is Jackie. And you probably know what happens next after this point.

There is an obvious tapping on meaningful issues today. The film subtly brushes on Third-World questions as seen through the eyes of a First-World teenager. Jackie is one of those kids we so often make fun of for her “First World problems” such as losing her mobile phone batteries or not knowing if she’ll be granted a ticket abroad. She then gets exposed to a world where people have no clue what a smartphone is and electricity is a luxury, not a necessity. The formula is old hat, but ultimately, it works.

Kiko is a symbol of that commonly hushed reality about politicians carousing around and making dynasties here and there. It’s an old issue that has become a non-issue. Remarkably, Kiko does not fault his father and seems to take his life better than most kids his age. He lives away from his father's home and even calls him “Mayor”, rather than “Dad”. There is a natural sense of maturity in this role that doesn’t feel forced or processed.

The chemistry between the two central characters threads on familiar waters, and is mostly carried by Padilla’s powerful screen presence and natural charm. There is an uncomfortable amount of Kathryn Bernardo legs in this movie, proving that her blossoming beauty might be ready to move on from safe, teeny-bopper roles to more mature ones. The relationship between her and Padilla teeters around ideas of intimacy and sex, which could mean that the “innocent puppy love” shtick might not fly so well next time, for they are starting to mature both physically and emotionally.

Bernardo’s acting may need a little more work. There is a lengthy crying marathon with Lorna Tolentino that felt highly irrelevant and over-drawn.

Luckily, much of the movie’s narrative is carried by Padilla’s genuine talent for the screen. Perhaps the only emotional high note the film ever offers was with him, making the audience weep for the same reasons his character is suffering from – a mark of a truly good actor.

The rest of the supposedly “dramatic” sequences are too bland that you can take a bathroom break or get something from the fridge as they transpire.

Padilla assumes the mantle well, showing off a kind of luster similar to his uncle Robin Padilla in his prime. He wears the rugged, probinsiyano aura far better than most actors of his generation. A huge improvement, say, from someone like Gerald Anderson’s failed attempt at losing his coño-boy antics while portraying a rough-on-the-edges convict in Eric Matti’s crime film, OTJ.

The rich-girl-poor-boy gimmick has been done to death already but there is an innate reason behind this: it works every time. The movie might be predictable, but at least it does nearly everything right. The province of Tarlac was remarkably used to the film’s advantage as the mere sight of the crater of Mt. Pinatubo is something to behold. Cinematography-wise, there is enough thoughtfulness behind the lens but the light could have been filtered better; some of the scenery shots appear burnt and flat.

If you are interested and willing to pay for a ticket to watch something that can take your mind off bigger, harsher reality problems so you can immerse yourself in the make-believe world of rom-com drama for an hour or so, then by all means watch Crazy Beautiful You. It will surely make your time (and money) worth it. Somehow.