Cinemalaya Film Institute to open by June 2015; new and veteran filmmakers pitted against each other in 2016 edition 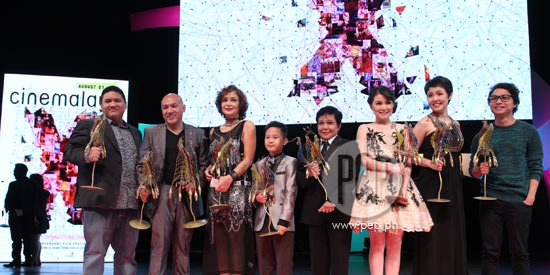 Cinemalaya X winners. In the 2015 edition, the viewing public can look forward to a retrospective of the best works of Cinemalaya from the last decade as well as the creation of a Cinemalaya Film Institute. There will also be a short film competition this year while the full-length feature film competition will resume in the 2016 edition.

As early as the last quarter of 2014, loyal fans and supporters of Cinemalaya have been asking what’s next for the country’s leading independent film festival after holding its successful 10th edition.

As it turns out, Cinemalaya will have a simpler version at the Cultural Center of the Philippines from August 7-14, 2015 as a “reboot” takes place during the 11th edition.

Meanwhile, the 12th edition of Cinemalaya will be held on August 5-14, 2016 at the CCP and other festival venues.

“Still in the works. There will be some major changes, but the basic Cinemalaya objectives and mechanics will remain,” said Direk Laurice at the time.

Indie filmmakers have been used to submitting their entries/scripts to Cinemalaya during the last quarter of every year. However, in late 2014, there was still no announcement regarding the Call for Entries.

There have been fears that Cinemalaya would not have an 11th edition amid reports that the financially struggling film fest no longer received subsidies from long-time patron Tonyboy Cojuangco.

In fact, the 2014 Cinemalaya edition was financed mainly through funds allocated by the DBM (Department of Budget and Management).

In November 2014, during the QCinema Awards Night, Quezon City Mayor Herbert Bautista expressed his interest in helping/ co-producing Cinemalaya and admitted that there have been initial talks with the QC government.

But at that time, there was no direct confirmation from the Cinemalaya camp – yet.

In early January 2015, during the annual media appreciation lunch sponsored by the Cultural Center of the Philippines, no less than CCP President Mr. Raul Sunico told PEP that the government, through the Department of Budget and Management, has released funding for this year’s Cinemalaya.


(Read: FIRST READ ON PEP: CCP gets funding for Cinemalaya 2015)

Last January 29, PEP sent a text message to Direk Laurice to confirm the update of Mr. Sunico of CCP.

“As of now, funding for [film] grants will be coming from government [DBM], but we will be pursuing partnerships with Quezon City and other entities as well,” Direk Laurice explained via text messaging.

In the said press release sent to the media, major changes will take place for this year’s Cinemalaya. It clarified that the Cultural Center of the Philippines (CCP) stays as the main venue and the festival will take place from August 7-14, 2015.

We again contacted Direk Laurice via social media, and she now gives us a clearer view of the plans for Cinemalaya this year.

“This is a transition year for Cinemalaya, which gives us time to evaluate the impact of our films here, regionally and internationally, review our vision and expand our mission.

“We need this time to start implementing our long-term plans. So this is really a year to reboot.

“The big changes are the launching of the Cinemalaya Institute, the open competition for the full-length features, and the Asian section,” says Direk Laurice.


At the time we interviewed him, there was no CCP-Cinemalaya official announcement yet.

“Cinemalaya goes on in August [2015]. Due to time limitations, it will be a simpler festival. Just wait for announcement.

“However, I think entries will already be accepted for 2016. That's all that I can divulge,” said Direk Mel.

What will be the plans for this year’s Cinemalaya?

“There will be new short film competition. New Asian films curated by NETPAC (Network for the Promotion of Asian Cinema).

“Ten competing shorts will be awarded. NETPAC will curate the Asian films.

“Full-length competition entries to be submitted as soon as rules are announced. These finalists will be revealed at the [Cinemalaya 2015] awards night in August.”

Direk Mel confirmed that there will be NO full-length films / competition this year since the production budget for the competing feature films was just approved by the DBM last December – and released in January.

Due to time constraints, it would be nearly impossible for filmmakers to go through the process – from the submission and selection of entries, casting, pre-production, principal photography and post-production – of completing their films this 2015.

Direk Mel pointed out that the full-length competition will be revived next year, 2016.

According to the official announcement, entries to the 2015 Short Feature Competition and to the 2016 full length feature category will be accepted until March 6, 2015.

The director also revealed that for 2016, there will only be ten (10) full-length films to be selected – no more New Breed and Directors Showcase categories, but just ONE category for the main competition.

“For 2016, only ten entries [will be selected], no distinction between new and veteran directors. Entries must follow the rules, no more finished scripts -- only synopsis and sequence treatment will be accepted.

“Winning [full length] entries will be announced at awards night of the 2015 festival. These scripts are to be made and shown in competition in 2016, as before.”

In the new Asian Films section, will a new Filipino full-length feature film be able to compete?

“Asian films to be curated by NETPAC, so it's up to them if they will give an award or choose a Pinoy film in competition,” he said.

CINEMALAYA FILM INSTITUTE FOUNDED. Another innovation this year is the creation of the Cinemalaya Fiilm Institute, which will be headed by award-winning director and graduate of the NYU Film School Carlos Siguion-Reyna.

What is the Cinemalaya Film Institute?

Scheduled to open this June, the CFI will offer a three-semester program of intensive training in writing, directing and producing; cinematography, editing, sound and production design, music score and acting.

Direk Laurice explained, “Cinemalaya wants to contribute to the professionalizing of film practitioners.

“That is the rationale for the creation of the Cinemalaya Institute. Specfically, it will train and accredit in the key areas of film production.

“The first key areas will be writing, directing and producing because these are the cornerstones of the Cinemalaya selection.”

During Cinemalaya X (the 10th edition), Mr. Nes Jardin (former Cinemalaya Foundation President) announced that Cebu City might be included in the future theaters in showing Cinemalaya films. What’s the latest on this?

“The theatrical screenings will be during the festival period in 2016,” said Direk Laurice without confirming if Cebu will be part of the festival by then.

In an earlier interview with CCP President Sunico, he disclosed that they are open to showcasing Cinemalaya entries to the provinces, as Senator Loren Legarda proposed during the budget hearing.


ON PARTNERSHIP WITH QUEZON CITY. Direk Laurice also reitereated that there will be no more divisions of the full-length films, starting next year, 2016.

“This is an open competition, it will be open to all Filipinos.

“Many of the original new breed filmmakers have already ‘graduated’ to the directors showcase category. So there is no more need for two (2) categories.”

There is one thing that Direk Laurice confirmed: “The partnership we want to enter into with Quezon City will be for 2016.”

Going back to the “retrospective” of Cinemalaya entries from the past 10 years, what would be the criteria for choosing the films?

“The 10 films for the retro will be selected from among the best films, jury prizes and audience choices. Hopefully, this will represent the best.”

It’s also good news that finally, after 10 years, the Cinemalaya seed grant for the filmmakers has been increased.

Ten finalists will be chosen for the full length feature category. Finalists will receive production grants of P750,000 each--up from P500,000 given in previous years. The Best Film will receive a cash award of P250,000.

Cinemalaya 2016 will be held on August 5-14 at the CCP and other festival venues.

“Yes, we have increased the seed grant to 750k from the CCP budget provided for by Department of Budget and Management,” Direk Laurice said.

In summary, here are important points about the 2015 and 2016 editions of Cinemalaya: