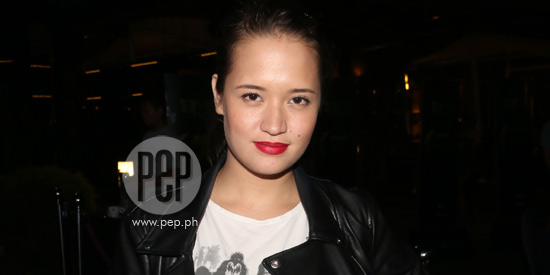 Actress Annicka Dolonius is unsure if she has a full frontal scene in her upcoming indie film Ninja Party.

One thing is for sure though, she was topless when she shot her sex scenes for this film directed by Jim Libiran.

Conceptualized and helmed by CEO and founder Wilson Tieng together with Brillante Mendoza, Sinag Maynila aims to feature films that reflect Filipino culture while presenting social issues deserving of discussion among audiences here and abroad.

The other films of Sinag Maynila include Paul Sta. Ana’s Balut Country (about the heir to a duck farm who must decide between selling the property or saving the loyal caretakers), Zig Dulay’s Bambanti (the search for a missing watch instigates the painful quest for the truth), Lawrence Fajardo’s Imbisibol (revolving around four Filipino migrant workers in Japan) and Remton Zuasola’s Swap (about a young father torn between solving a crime and committing another crime to save his son).


FROM FHM GIRL TO NINJA PARTY GIRL. Annicka first had the chance to act on the big screen when she was cast in the 2007 film Pisay, which depicts the lives of Philippine Science high students in the 1980s.

She gained popularity when she starred in the 2012 Cinemalaya entry Ang Nawawala wherein she played the leading lady of Dominic Roco’s character.

This 2015, Annicka plays a sexually active young woman in Ninja Party. The title of the movie is actually the slang term for an open party wherein participants have sex with everyone while blindfolded.

The 24-year-old actress has done sexy pictorials in the past, the latest of which was for FHM Ladies' Confessions Celebrity Diaries Vol. 8.

Her Ninja Party co-starJulz Savard (who became a MYX VJ in 2010) also had a sexy pictorial for the said issue of FHM Ladies' Confessions.

Their co-stars also include Elora Españo and newcomer Bea Galvez.

Annicka admits she was initially hesitant about being topless in front of a camera but eventually, she became comfortable enough to let her inhibitions go while shooting their movie.

“I decided I didn’t want to wear anything covered except for a very, very sensitive part of my body.

“Besides from that, it was very all out so I’m not sure if they’re gonna put it a full frontal but I was open to that,” she told PEP during the launch of Sinag Maynila held at SM Aura.

TWO VERSIONS. Ninja Party is based on rumors that started years ago about girls from exclusive high schools who organized sexual soirees with boys. The girls have their faces covered as they have sex with multiple participants. The boys were blindfolded so they did not know the identity of their partners.

Is it based on a true story?

“Meron siyang Xerex creative license,” he said with a smile. Direk Jim used to pen the popular sex advice column Xerex, which was published in a tabloid during the 1990s.

Since SM Cinema does not screen movies that are rated R-18 by the Movie and Television Ratings Classification Board (MTRCB), Direk Jim is planning on making two versions of Ninja Party.

He is aiming to do a version that will be rated R-16 and a director’s cut that will be screened in international film festivals.

When asked how different the R-16 version will be from the international version, he teased, “It will be more truthful. Of course, ang daring sa atin ay normal na sa kanila.


Here are excerpts from PEP’s exclusive interview with Annicka Dolonius:

How would you describe your character in Ninja Party?

Annicka: “Her name’s Alexa Gonzales and she’s in high school. She’s in her senior year and she’s about to be the valedictorian... She’s an honor student.

Did you start as a good girl character?

Annicka: “That’s so hard to say. That’s what I like about these characters. They have their good sides but they also have these horrible things that you should hate about them. There’s a part of you that’s a good person and there’s a part of you that makes mistakes, makes bad decisions and things like that. That’s what I like about it. It was sort of mixed. She’s a veledictorian. She’s very studious. A good student but she’s also reckless. Not very street smart. She was trying to be cool and impress people. She has insecurities.”

How daring are you in this movie?

“Very” was her honest reply.

Do you have full frontal nude scenes?

Annicka: “I can’t remember. I think so. Honestly, for me, if I was gonna do this I was gonna do all out. I decided I didn’t want to wear anything covered except for a very, very sensitive part of my body.

“Besides from that, it was very all out so I’m not sure if they’re gonna put it a full frontal but I was open to that.”

But you were topless?

Annicka: Yes, which was fine. It was no big deal.

Did you have any hesitations doing that?

Annicka: I did at first. But you know I decided that what I committed to the film…I decided that I might as well go all out because something might be lost if there is any inhibition at all. Something would be lost. So I thought I might as well go all out. So I don’t know if there will be full frontal…I know that at one point, I had to reach for a thing [demonstrating how she reached out her hand]. It was very open.”

Were all of you topless?

Annicka: “We were…yes, mostly naked except…The idea was be comfortable with what you’re showing…that’s what we will work with.

How was it like shooting the sex scenes on the set?

Annicka: “It was very professional on the set. Don’t get me wrong. Everybody was very comfortable with each other.

“This was so surreal. This is so bizarre. This is insane. I can’t believe I’m doing this right now. It was very graphic. But definitely an experience I will never forget.

Were you on the bed?

Annicka: Yeah. What happened was we were all naked and we would be positioned [on the bed] and the camera would move in between us and Direk Jim would be getting the shot.

“It was very fast. So surreal.

Was it awkward for you being around naked guys?

“Initially taking off your clothes, it is awkward. You adjust to it.

“Then [you think] we’re in a work environment. You’re gotta get a good shot. Let’s loosen up and be okay with each other. If everybody stiffened up, it’s not gonna look good. Worst, it’s gonna be a waste. And we were lucky to have such professional actors, both the girls and the guys.”

Will she continue with this sexy route? Would she accept sexy roles in the future?

Annicka: “I did this film because I liked the script a lot. And I thought I had a lot of interesting things to say. Yes, there were daring scenes that were part of it. How can you do the film without it? You know what I mean?

“If I were offered similarly daring roles in the future, it would really depend on the script.

“It takes a lot of… I’m not just gonna take off my shirt…it really depends on the story. If I get a script that requires something daring like another sex scene, if it’s relevant to the story, I don’t see the problem because I’m an actress. That’s what I do.

“I don’t think that people should be ashamed to be those kinds of intimate scenes because it’s just part of the human experience.

“We have sex. We get naked. We take our clothes off and take a shower…”

“Hopefully, when people watch it, they don’t get turned on. Hopefully, they will think and say ‘Oh my God! Wait a minute!’ Something like that.”