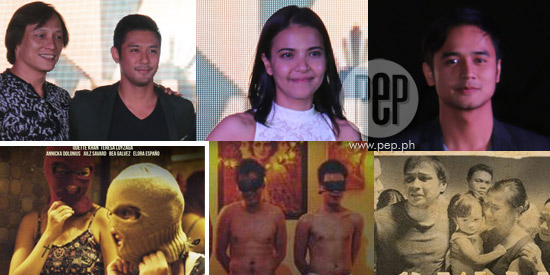 Starting this Wednesday, March 18, moviegoers will have the chance to watch five full-length movies with out-of-the-box plots set against the backdrop of the country's social issues.

These movies are part of the newly established film festival called Sinag Maynila.

Celebrities who are part of the inaugural edition include JM de Guzman, Alessandra de Rossi, Rocco Nacino, Allen Dizon, and Odette Khan among others.

The five official entries of Sinag Maynila 2015 are:

1) Balut Country by Paul Sta. Ana (about the heir to a duck farm who must decide between selling the property or saving the loyal caretakers)

Spearheaded by CEO and founder Wilson Tieng and Cannes award-winning firector Brillante Mendoza, Sinag Maynila aims "to give filmmakers the chance to tell the stories of Filipinos in the most compelling visual narrative possible."

The films are scheduled for screening on rotation basis daily from March 18 to 24, 2015 at SM Megamall, SM North EDSA, SM Manila, SM Fairview, SM Southmall, SM Mall of Asia and SM Aura. The awards night will be held this Saturday, March 21, at SM Aura Skypark. The film will be recognizing excellence in Film, Direction, Performance, Screenplay, Cinematography and Production Design.

SM will also be giving a special citation to the People's Choice movie.

After the festival period, Sinag Maynila plans to screen the films in other SM Cinemas as well as in universities and colleges.

For the first edition of Sinag Maynila, both Tieng and Direk Brillante handpicked five "reputable independent filmmakers" from the Philippines and gave them a production budget of P2 million to create their dream movie. 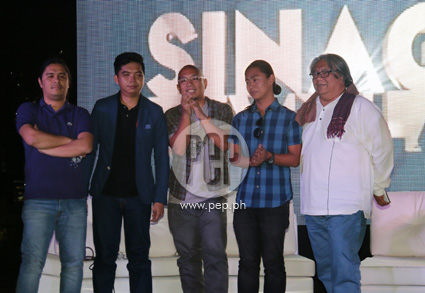 Here are the five films competing in the 1st edition of Sinag Maynila:

Jun (played by Rocco Nacino) is the heir to the "balut" farm left to him by his late father.

When he learns that his girlfriend is pregnant with their child, Jun must decide between selling the property to secure a future with his partner or sparing the family of the land’s loyal caretakers of inevitable displacement.

Ronnie Quizon is cast as Dado, the caretaker who has been working on the family's duck farm.


According to Direk Paul Sta. Ana, he opted to shed light on the plight of workers in the balut industry.

"Very popular ang balut not only in the Philippines but also worldwide.

"Naisip ko na why not make it into a metaphor of displacement...may mga tao rin na nadi-displace sa kabuhayan nila."


The search for a missing watch instigates the painful quest for the truth in Belyn’s and her son’s life. Alessandra plays Belyn, the househelp who is the mother of a young boy (played by Micko Laurente) accused of stealing a watch.

Bambanti, which means scarecrow in Ilocano, is heralded as the guardian of the fields. In the same manner, mothers are regarded as guardians of their children in this film.

According to Direk Zig, they shot this film during the week-long Bambanti festival in Isabela held every January.


Shot mostly on location in Fukuoka and Hokkaido in Japan, Imbisibol revolves around four Filipino migrant workers. Linda, Benjie, Manuel and Rodel are suddenly caught together, amid their individual struggles, in a complex game of hide-and-seek where staying invisible is the only way to survive.

The film depicts struggles faced by Pinoys at a time when thousands of undocumented workers and overstayers were being deported in response to strict Japanese laws.

In 2013, Direk Law Lawrence rekindled his love for theater when he directed the play Imbisibol, which was staged at the Cultural Center of the Philippines as part of the Virgin Labfest 9. It was restaged the following year as part of Virgin Labfest 10.

Lead star JM de Guzman is cast as a migrant worker who lost his job in Japan. He crosses paths with a "hosto" played by Allen Dizon.

Ces Quesada plays the landlady who hides Filipino overstaying immigrants in Japan. She recalled, "We had to work in extreme temperatures, the lowest of which was minus 13."

Best known for his Tondo film about gangsters titled Tribu, Direk Jim Libiran thanked the organizers for bringing him out of his three-year hiatus.

"We are coming out with an R-16 version," says Direk Jim in order to comply with the ruling of SM Cinemas not to release films that are rated R-18.

He also plans to come up with a director's cut that will be shown in film festivals abroad.

Swap revolves around a young father who is torn between solving a crime and committing another crime. His only son is kidnapped and the criminals demand that he steal another kid in exchange for the life of his son.

When Remton was a young boy, he was actually kidnapped and he used anecdotes from his parents and other people to come up with this story.

"The movie is one whole take yet the storytelling is non-linear," says Direk Remton about his film that used the Cebuano language.