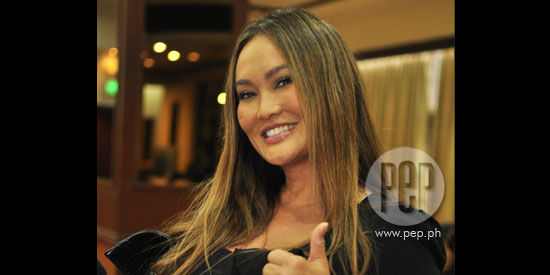 Fil-Am actress Tia Carrere on headlining Mark Dacascos's directorial debut Showdown Manila: “We've known each other for 30 years and he's such a positive, kind and enthusiastic playmaker in Hollywood. We've worked together on General Hospital. We've been friends for a very, very long time. And when he called me and said, 'Tia, I'm doing this movie, my first full movie. Will you be there?' I said, 'Absolutely!'”

In this action film, Tia is cast as a woman who wants to exact revenge on those who caused a tragedy involving her family. Iza Calzado is part of this movie as a policewoman. The other Filipino stars include Will Devaughn and Jake Macapagal.

Tia is best known for the American soap opera General Hospital, the Arnold Schwarzenegger film True Lies and Rising Sun. She also did guest appearances in various American TV shows such as The O.C. and Celebrity Apprentice.

THIRD TIME IN MANILA. Born and raised in Hawaii to Filipino parents, Tia shared that it's her third time to visit the Philippines and she's happy to be able to catch up with her relatives in between shooting for Manila Showdown.

The first thing she actually looked for as soon as she came here was the Filipino delicacy called “budbud,” a rice cake snack that her grandmother used to make when she was a kid.

“But nobody can find me any budbud. Does anybody know what budbud is? I've been looking for this.

“But anyway, this is my third time here. But I plan to come back more often because it's been too long.

“It's good to be here,” said Tia at the presscon for Showdown Manila held at the Intercontinental Manila, Sunday afternoon, March 22.

When PEP.ph (Philippine Entertainment Portal) asked about her memories of Manila, Tia said that she came here in 2003 to push for the benefits of Filipino war veterans who fought with American troops during World War II.

Tia also identified fellow Hollywood stars of Filipino descent who were also part of the said cause.

“Lou Diamond Philips and I came here as a guest of the president at the time.

“We did a lot of lobbying. This is like off screen stuff too.

“Lobbying for Filipino veterans of World War II that didn't get their veterans benefits.

“They were receded by [former President George] Bush, right?

“And so we fought hard to get them back, that's why we came here. Me, Lou, Rob Schneider, Dean Devlin...”

On her second visit in the Philippines, Tia said that she got the chance to stay in El Nido Resort in Palawan, which she recommends to her Showdown Manila co-stars who also graced the presscon.

“I had dinner on a sandbar in the middle of the ocean, the South China Sea.

“They said, 'We have a surprise for you.'

“On a speedboat, in the middle of the ocean, you see the torches and dinner.

“These are amazing experiences we can't even explain back in the States. This is a magical place,” Tia enthused.

Even though she's born and raised in the U.S., Tia acknowledges her Filipino roots and she's happy to represent "Pinoy pride" in her own little way.

"So you know, we're very talented people on all across, you know, singing, dancing and acting.

"But it's kind of funny because Filipinos' great strength is that we can assimiliate into many different cultures.

"But also, by the same token, we hold on to our culture and identity and are all very strong to these values," said the 48-year-old Hollywood actress.

SHOOTING FOR SHOWDOWN MANILA. This time around, Tia is ecstatic because she gets to work with close friends including actor-turned-director Mark Dacascos (Iron Chef America: The Series) and co-star Casper Van Dien (Starship Troopers).

Asked about her experience shooting in Manila, Tia replied, “It's been a blast!

“So many of us, we've been around in the business for such a long time, about 30 years.

“What's great is that we're all seasoned professionals. Casper and I, were in casting class together twenty something years ago.

“But you know, it's wonderful to have these consummate professionals at the top of their game just plain together again in the sandbox and open to the flow.

Tia related that she didn't think twice about being part of the action-flick when Mark first told her about it.

“I love Mark Dacascos and we've known each other for 30 years and he's such a positive, kind and enthusiastic playmaker in Hollywood.

“We've worked together on General Hospital," said the actress who portrayed Jade Soong Chung in this U.S. soap opera.

“We've been friends for a very. very long time and when he called me and said, 'Tia, I'm doing this movie, my first full movie. Will you be there?' I said, 'Absolutely!'”

Tia also enjoyed working with Filipino co-star Iza Calzado, who plays the role of a policewoman in Showdown Manila.

As seen in the way they bantered during the presscon, the two seemed to have established rapport with each other both on and off cam.

“I'm so happy hanging out with Iza and making new friends from Russia, from all over the world.

“Alexander is putting this big crew together and that's something you don't see everyday.

“It's great to be here, It's wonderful to do a collaboration with these people,” Tia added.

Aside from shooting in Manila for the past five days, the cast and crew of Showdown Manila are slated to go to Daranak Falls in Tanay, Rizal and Coron, Palawan to continue working on the action film.