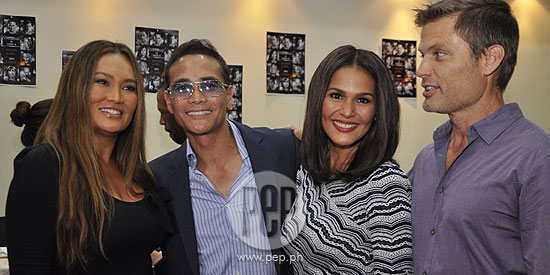 Iza Calzado (right) wants to try her luck in Hollywood: “I’m just keen to try everything that the universe gives me.You know, if I’m there and if somebody tells me, ‘There’s a reading for this character and they [require] a Southeast Asian/Pan-Asian look,’ why not?” The ABS-CBN actress plans to go to Los Angeles in May. Iza is joined in this photo by (L-R) Tia Carrere, Mark Dacascos and Casper Van Dien.

The 32-year-old Kapamilya actress shared that she actually took part in a casting call before she was handpicked by Mark to play a “bad-ass policewoman.”

“So I went in, I read for the part and obviously I got the part.

“For what reason Mark liked me for the film you’ll have to ask him since it was his call. So I’m just lucky,” said Iza in an interview with PEP.ph (Philippine Entertainment Portal) and two other reporters at InterContinental Manila Hotel, Sunday, March 22.

BEING PART OF SHOWDOWN MANILA. In the four days that she joined the on-location shoot of Showdown Manila in the Philippines, Iza said that she learned to fire a gun for the first time in her showbiz career.

“I loved it and it’s nice because they don’t have this pre-conceived notion of who I am.

“They didn’t typecast me like yung kinakawawa or whatever. I get to play something else.

“It’s a breather for me. Something refreshing,” she enthused.

Off cam, Iza admitted feeling "starstruck" working with Tia who is known for movies such as Arnold Schwarzenegger’s True Lies and Sean Connery’s Rising Sun as well as the TV series Relic Hunter that ran for three seasons.

“I was so starstruck! I enjoyed taking a selfie with Cary Hiroyuki-Tagawa [Mortal Kombat, Star Trek: The Next Generation].

"It was so much fun on the set and getting to bond with Tia Carrere was like a dream come true.

“Growing up, she was this beautiful, exotic Filipino that we all knew about.

“We are so proud of Tia, watching her in the Hollywood big screen; and now we exchange messages so that’s so awesome,” Iza said with a smile.

The Kapamilya actress was also thrilled to be friends with the rest of the cast and staff of Showdown Manila.

“Everyone else has been so nice—Casper [Van Dien], Alex [Nevsky, actor and producer], Matthias [Hues]…

“I [also] like working with Mark because as a director he’s filled with positive affirmation.”

The fact that the foreign cast members of Showdown Manila have good things to say about Iza during the presscon proper is enough for the Kapamilya actress.

“I always pray that in some way I could represent the country positively like even when I work with people.

“Parang I have to do well not just on cam but off cam.

WILLING TO TRY OUT IN HOLLYWOOD. Iza further revealed that her short stint in the international film inspired her to pursue acting classes in Los Angeles this summer.

“It’s great because I really wanna go there in May after I do Sabel the play.

“I want to go there and take a couple of classes when I can.

“Now I have new friends to get in touch with and to ask about what I can do there.”

Given a chance, the Kapamilya actress said that she’s willing to try out for auditions in Hollywood.

“I’m just keen to try everything that the universe gives me.

“You know, if I’m there and if somebody tells me, ‘There’s a reading for this character and they [require] a Southeast Asian/Pan-Asian look,’ why not?”

As for her showbiz career, Iza said that she’s set to renew her contract with ABS-CBN and she’s confident that the network’s management will allow her to work calendar to be a little flexible.

“ABS-CBN is very easy to talk to. Direk Lauren [Dyogi, ABS-CBN Entertainment Head for TV Production] is a very sensible man. He treats me really well and I only have really good things to say [about him].

Even though there’s no guarantee with regards to what awaits her in L.A., Iza is excited to explore career opportunities that will come her way.

“A month ago I didn’t even know I was gonna be working on this film.

“A year ago I didn’t know BenCab [National Artist for Visual Arts Benedicto Cabrera] was gonna paint me and I’m finally gonna do a play for him.

“Although it was three years in the making, I never thought it would actually happen.

“But you know what, I said, ‘Lord, I have faith and I trust that when the time is right things will happen and fall into place.