Cynthia Rothrock back in action via Showdown in Manila 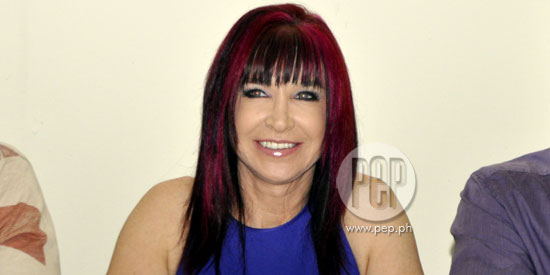 Like any other career woman with family, Cynthia Rothrock stopped working temporarily when she had her daughter, who is now 15, and not quite taken by the idea that her mom is a celebrity in martial arts. "I trained her. She knows self-defense and that’s about all she wants to take with the martial arts," Cynthia told PEP.ph (Philippine Entertainment Portal).

Bungad niya during the presscon proper, “Well, first of all, this is my first time here.

"And back in the 1990s, I have a lot of films that were quite popular in the Philippines.

"So, I’m so excited to finally get here. I’m really happy to be here."

Kuwento pa ni Cynthia, “We just got in last night… so we haven’t even say hi to everybody here yet.

"It’s my first time to see everybody, but it’s an honor to be here with this cast.

"Finally I’m in the Philippines. So, it’s so exciting for me.”

"So I stopped doing films for a while.

"I did four films in the last two years, this is my fifth, and then I have two more slated for this year.

"I took some time off because I wanted to be mom and, you know, I don’t want to be travelling around without her," kuwento ni Cynthia sa one-on-one interview niya sa PEP.ph (Philippine Entertainment Portal).

What does her daughter say about her being a famous martial arts expert?

“She knows but she doesn’t really like that much.

"She just kinda like just to be mom instead of, you know, Cynthia the martial arts celebrity.

"But you know what, I trained her.

"She knows self-defense and that’s about all she wants to take with the martial arts. That’s important."

What were the films she did for the last two years?

“I just completed a film called the Martial Arts Kid. And that would be probably out sometime toward the end of this year.

"I did a film that’s out right now called Mercenaries [with Kristanna Loken, Brigitte Nielsen, Vivica A. Fox, and Zoe Bell].

“And then, I did Santa Summer Home [2012], which was a Christmas little movie.

"And then, I did Bad Ass Showdown, which is funny because this is Showdown in Manila!

“I have a couple of projects that are upcoming.”

How did they get you for this project?

“Actually, Alexander, he has brought me over to Russia a lot of times, we're friends.

“We went to Russia to do some publicity, write for him… and, actually, Matthias and I went over with Adrian Paul and we became friends.

"Marc Dacascos and I are friends…

"But, I think, the reason why I am here in this movie, Alexander talked to some of his friends like Matthias, Don, you know, we’re all friends.”

What’s her role in the movie?

“My role here, actually, Alexander and Casper are going after the bad guys and they need help.

"And Don, I, and Oliver are part of this whole team. So he needs us to come in and help him apprehend the bad guys.

“It will all be fun. I like it because we’re gonna be all like in military guard, you know.

"That we will be doing a lot of fighting, a lot of night work, stunts. That’s the kind of stuff I like to do.”

At this point in her life, Cynthia says she would still want to continue doing what she does best.

“But it’s always kinda nice to do a little bit more, to get more with weapons, because, you know, I am a weapon specialist now.

"But here, Showdown in Manila, I will probably do some Filipino styles, so that’s gonna be great."