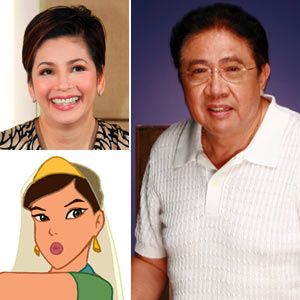 In the 13th century, Princess Urduja of Central Luzon falls in love with a Chinese pirate named Limhang. Their inter-racial love story is filled with challenges since Urduja's father, Lakanpati, wants her to marry a brave warrior named Simakwel.

For the first time ever, a local production company will produce a full-length animation film that capitalizes on the talents of Filipino animators. APT Entertainment Inc., the producer of this epic film, hired 10 to 12 animators to conceptualize and bring the various characters to life on paper and finally on the big screen.

Voiced over by some of the biggest stars in showbiz, Urduja is a visual feast that celebrates the talents of Filipino animators. The feisty princess of the Tawilisi tribe is voiced over by Regine Velasquez while her loved one, Limhang, is dubbed in by Cesar Montano. The patriarch Lakanpati is given voice by Eddie Garcia while his favored warrior, Simakwel, is voiced by Jay Manalo.

In the press conference of Urduja held earlier today, March 26, at Florabel restaurant at The Podium, Mr. Antonio "Tony" Tuviera of APT Entertainment Inc. narrated that he had been planning to do this project for the past 10 years.

"It took us almost ten years to make this. Actually, we're on the eleventh year now. It started in 1997 and it was actually a dream of mine. My original dream was to make a series of animated features on television. But along the way, I found out that it was quite impossible to do on television because of the cost," he says. "Then I started to do a full-length film. In the span of eleven years, I gave up six or seven times and convinced myself that it was really impossible."

Yet somehow, Mr. T (as Mr. Tuviera is fondly called) found the resources and the drive to push through with the project in an effort to give Filipino animators a chance to shine in their homeland.

"I wanted to give our animators a chance to be recognized," he declares. "They are actually doing a lot of animation abroad—some of them are in Pixar, Disney...ang dami. They are doing animation but never silang nakakuha ng credit. Yung mga Biker Mice...so sabi ko, bakit hindi sila bigyan ng recognition dito?"

As a result, Urduja is a product of traditional and digital animation that is hailed as the first of its kind in the Philippines.

Regine was handpicked by Mr. T to play the royal princess of the Tawilisi tribe in this film. Why did he choose Asia's Songbird to portray this pivotal role?

He reveals that he talked with Regine regarding this animation film as early as three years ago. The singer-actress readily agreed to do the project without even asking about her talent fee or other pertinent details.

When asked about the production cost of doing this epic film, Mr. T says, "It will be a tough task to get back the investment, but I cannot really quote an amount. It will be tough even if it's a hit, I don't think we can get it back. Trial and error ang process."

Why didn't he release this film during the Metro Manila Film Fest to cash in on the holiday spending spree of families?


Despite all the challenges, Mr. Tuviera is optimistic about the future of animation in the Philippines. In fact, after finishing Urduja, which is now in the post-production phase, he is hoping to pursue his original dream of creating an animated television series, and hopefully in 2010, release another full-length animated film.