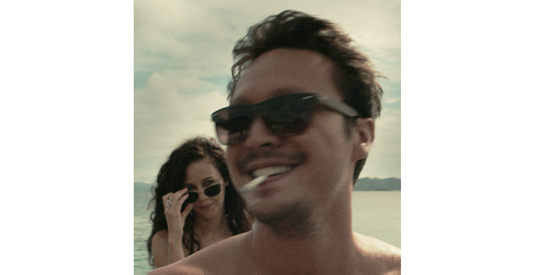 In Waves, Baron Geisler and Ilona Struzik are cast as two troubled souls who decide to rekindle an abandoned friendship. Directed by Don Gerardo Frasco, this romantic drama will open in cinemas by June 24, 2015.

Making his directorial debut is Don Gerardo Frasco, a native of Liloan, Cebu who pursued his filmmaking and photography studies at the International Academy of Film and Television and the New York Film Academy.

Don and cousin Ayana Jimenez (Waverly Pictures’ executive producer), with VIVA Films as the distributor for ‘Waves’, are gearing up for its release in cinemas nationwide this coming June 24.

The director sums up Waves by saying, “It’s about the intimate love affair between Ross (Baron) and Sofia (Ilona)—two troubled souls who decide to rekindle an abandoned friendship. A jaunt to an isolated island brings back old emotional struggles and sheds light on new ones, making any kind of relationship an unlikely proposition.”

Loosely based on his personal experiences, the movie’s narrative was also shaped by Don’s cinematic vision. He expounds, “Along with personal experiences, I gave Scott a few guidelines—the relationship had to be interracial, dialogue had to be predominantly English, 90% of the plot should be at the Mangenguey Island in Palawan.”

In hindsight, Don looks back the valuable lessons he amassed from his New York tenure. He says, “I’d say the most valuable aspect about it was the experience of being away from home and away from everything I knew. I suppose it allowed me to define or redefine myself. The insights I learned from thriving within a very different culture opened up my mind in a positive way.”

Asked why he chose to shoot in the beaches of Cebu and Palawan, Don proudly states, “The islands in Palawan are quite spectacular. I’d say perhaps one of the best ones this planet has to offer. I thought it’d be a great way to highlight the Philippines. For Cebu, it’s where I grew up, so I found it quite comfortable to shoot, technically and logistically. And also because of the whale sharks.”

Taking all of twenty-one months from concept to finished product, Don confesses that they could’ve finished much earlier had it not been for his having to juggle his time between his passion for film and his marketing/retail work for the family-owned Titay’s Rosquillos enterprise.

Unlike most movie producers who normally expect to showcase their works in commercial cinemas, or in local or international film festivals, Don confessed to a rather radical marketing strategy for Waves.

He explains, “When I was developing it, I originally intended it to go straight to online distribution. The festival circuit wasn’t really part of the intention, not even theatrical distribution. That opportunity came later when more people got involved in the project and connected me to people in the film industry in Manila.”

Aside from its theatrical release on the 24th of June, to cater to audiences outside Philippines, Waves is available worldwide on Vimeo On Demand (vimeo.com/ondemand/wavesfilm or bit.ly/wvimeo)

Having successfully hurdled his debut movie’s “birth pains,” Don sees himself producing movies every 1-2 years, among them a biopic loosely based on his grandmother Corazon’s colorful life as entrepreneur and matriarch.

The proud Cebuano also reveals his ultimate dream for Waverly Pictures. He prays, “I’m hoping that Waverly Pictures would be in the vanguard of Cebu’s filmmaking scene. The dream is to build it into a sustainable company that’d help drive the growth of the industry.”