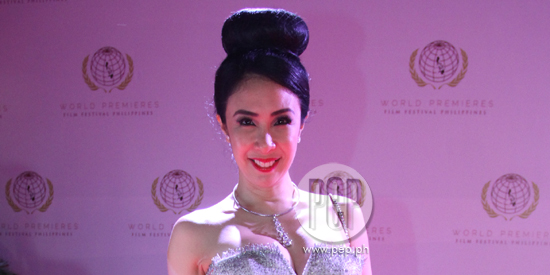 Giselle Sanchez, 40, says it's exciting to have Rayver Cruz as her leading man, even though he is almost half her age. After their sweet scenes, Rayver would ask, ‘Okay na ba yun Ate Giselle?’ The comedienne muses, “Parang, reality check, ‘Oo nga pala, may asawa ako at dalawang anak at ikaw ay kalahati ng edad ko!’”

PEP.ph (Philippine Entertainment Portal) had the chance to talk to the comedienne during the opening night of the WPFF last June 24 at One Esplanade.

Giselle is happy that their film was able to enter the film fest, which also won the award for Best Musical Score.

In the movie-musical, she is cast as the professor of kids about to mount a musical.

“I am actually the teacher of all the children.

She also shared that even though her role is still the usual comic roles she plays, she will have serious moments in the movie.

WORKING WITH RAYVER CRUZ. In the movie, her character has a romance with Rayver Cruz, who is cast as her co-teacher.

She says it was fun and exciting to work with someone younger as leading man, especially since she and Rayver had previous encounters already. She has also worked in the past with Geneva Cruz, Rayver’s aunt.

“Kalahati ng edad ko, although you know, he was so professional.

“Kasi actually, Geneva [Cruz] is a very good friend of mine.

"Geneva and I used to make a lot of movies before and siya yung parang kasa-kasama lang na pamangkin.

The 40-year-old actress says about her 25-year-old leading man:

“It’s so funny like we would look into each other’s eyes and pretend that we’re falling in love in the movie.

Giselle then burst out laughing!

In the movie, she works with newbie Jerome Ignacio, who is cast in the title character Filemon Mamon.

“He’s actually from the Ateneo College, so you know, pareho kami ng wavelength! The nerd wavelength!”

FILEMON MAMON AS AN ADVOCACY FILM. Giselle pointed out that their movie is an advocacy film for kids’ health. She also hopes that the film, directed by Will Fredo, will receive international recognition.

“It just came out so beautifully kasi it’s a musical.

“So I hope everybody likes it and if we don’t get an award, it gets international recognition.”

(To learn more about the entries competing in the 2015 WPFF, CLICK HERE)