SEX ED REVIEW: The birds and the bees are tackled in Haley Joel Osment's movie 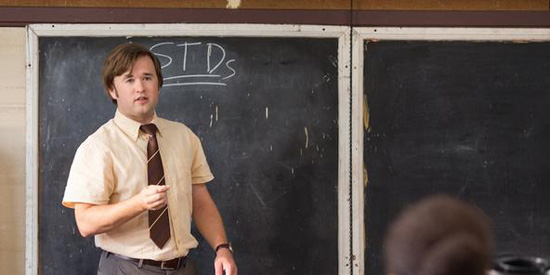 Haley Joel Osment plays a Sex Education teacher who faces a lot of problems about himself and his students. His movie Sex Ed is not all about a parade of flesh. It imparts values about patience, self-identity and responsibility.

Say sex education, and visions of various kinds of intimacy crop up. You brace yourself--or wait in bated breath--depending on which side of the morality fence you’re in, for many views about the birds and the bees.

Solar Entertainment’s current film Sex Ed is just that. That’s why the MTRCB (Movie and Television Review and Classification Board) rated it R-18, or for adults only.


MEANS TO AN END. After all, it’s just a means to an end. The end is all about teaching adolescents the basics of sex education so they’re armed with the tools to handle those raging hormones well.

It’s like this.The story revolves around Eddie Cole (Haley Joel Osment who became famous for his line "I see dead people" in The Sixth Sense).

He is a former geometry teacher who, for some reason or the other, gets underemployed as a bagel shop clerk.

Tired of dealing with a couple who wants to have a quickie in the shop restroom, he throws in the towel and goes home to see his best friend JT (Glen Powell) in his bed with girlfriend Ally (Castille Landon). The scene is steamy, yes, but far from lurid.

This, and the bagel shop incident, drive Eddie to seek his own happiness by going back to what he loves most" teaching.

He lands a job dealing with adolescent students as an after-school detention teacher. Eddie’s students are typical teenagers – confused and lost as they live in a world that’s almost there, but not quite.

TICKING BOMB. They’re no longer children; not yet adults. Questions they dare not ask their parents are buzzing in their mind. What they have is what true-blue products of social media have: the internet.

Eddie sees a bomb about to explode. Society is permissive. The generation gap is real. Teenagers are raring to experiment with their bodies.

So he decides to act. Eddie teaches sex education to his class. He lectures, taps "guest facilitators" like JT, uses props like bananas.

Aspiring teachers, you can get tips on how to handle classes here. It doesn’t have to be Sex Ed. It can even be Math or Religion. The point is, you must transform them from being doodlers or drifters to students hooked on learning.

More than that, teachers who matter go beyond technicalities and leave gems of wisdom about life and living.

Eddie not only taught Sex Education. He taught students how to wait for what they want (e.g. sex), how love and sex go together, how actions lead to outcomes and how these bid them to be extra careful.

BEING A MAN. End of story? Not quite. Eddie faces opposition from Reverend Marcus Hamilton (Chris Williams). The girl of his dreams has a boyfriend. And it doesn’t help that the Sex Education teacher is an inexperienced virgin.

And like his students, Eddie must start that journey – no matter how rough the road ahead is.

The teacher becomes the student.

Along the way, his discoveries about life and love will make moviegoers realize that yes, underdogs can be heroes, after all.