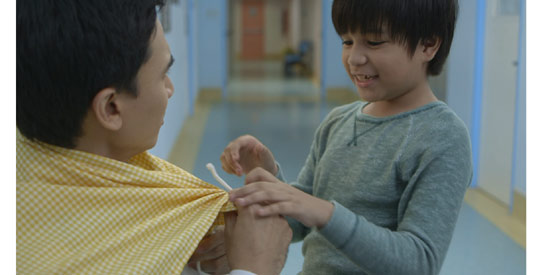 The short film Super depicts the true story of a cardiologist and a young boy with a congenital heart defect.

What does it mean to be "tapat"?

In its desire to highlight and honor this Filipino value, the makers of Champion Detergent sponsored the search for "My Champion Hero" on Star Movies.

Viewers were invited to share stories of people who exhibit "katapatan."

The chosen story was then made into a short film produced and broadcast by Star Movies.

Justine Denoga, assistant brand manager of Champion, said that this is in line with the brand's belief that short films serve as a platform to deliver messages that the brand itself espouses.


STAYING "TAPAT." Out of 40 entries, the finalists were showcased on www.mychampionhero.com. The winning story was sent in by Kathrina Mangahas, who wrote about her nephew Evan Reese Navarro, who has congenital heart defect and was operated on when he was just days old, then six months old, and very recently.

Her "champion" story revolves around Dr. Jonas del Rosario, a pediatric cardiologist, who has been Evan's doctor since he was born and has become a part of their extended family.

Faced with the choice between professional growth and staying true to his calling, Doctor Jonas chooses to stay in the Philippines because of a promise he once made to the young patient Evan that he will take care of his heart. Evan was born with a congenital heart disease and almost died.

Denoga says that to bring the story to the screen, they worked with the group of Fox International Channels Philippines in order to make sure that the story not only captures true events but also inspires people to remain true to their calling.

According to Jude Turcuato, SVP and GM of Fox International Channels Philippines, “Champion has been a long-time partner. They wanted to do something different, local, and embodied what they represent: honesty, sincerity, purity. We thought of a way to tie in with produce content to have a good fit. People’s stories who use the product and take honest, sincere, heroic stories. The project has potential to make a big difference."

The result, according to Denoga, is a "simple, straightforward, heartwarming approach to telling the story of congenital heart disease." The short film titled Super is considered the first locally made material on Star Movies.


MORE MOVIES TO COME. Though this is a first for Star Movies, Fox has been producing local content for its other channels broadcast in the Philippines.

"We started with National Geographic--documentaries are the easiest to make and most cost-effective. With scripted movies, the costs and stakes are higher. This is definitely a good start, to do scripted content, it's a good stepping stone for us to have more local and be more relevant to Philippine audiences. We’re already working on other things to have more local content," Turcuato says.

You can catch this heartwarming true story on the following schedules: