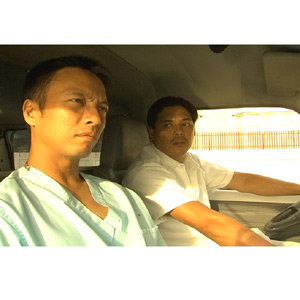 Nor Domingo (left) and Allan Paule (right) are the lead characters of Ambulancia. Allan is nominated for Best Actor in the fiction category of the 5th Naoussa International Short Film and Video Festival in Greece.

Filipino character actor Allan Paule and theater regular Nor Domingo star in Ambulancia, a short film that has been chosen to compete in the 5th Naoussa International Short Film and Video Festival in Greece. Allan is also nominated for Best Actor in the fiction category of the said film fest.

This indie film directed by Richard Legaspi has a painful twist about an ambulance driver (played by Allan) who believes that a dying patient can be saved by running over stray animals on the streets.

Taking place from May 8 to 11 at the Naoussa Municipal Theater in Greece, Ambulancia will be screened along with over 250 films from 50 participating countries. The festival is organized by the civil company of Arts and Culture ARTION in cooperation with the host country's Ministry of Culture as well as the Ministry of Macedonia and Thrace, the Greek Film Center, the Institute of Audiovisual Means, the Prefecture of Imathia, and the Cinema Museum of Thessaloniki.

Since 2004, the Naoussa International Short Film and Video Festival has supported the efforts of independent filmmakers around the globe through film markets and workshops. Held every May, the festival has constantly sought to bridge the gap between director and audience in an interactive manner and as such, it is hailed as the most important digital cinema festival in Southeastern Europe.

Judging the short films and videos as members of the jury are Festival president George Tseberopoulos, film director Panos Koutras, actors Dinos Augoustidis, Kleon Gregoriadis, Giordano Petri, and Ivan Yurukov, as well as Vasilis Terzopoulos, representative of the Ministry of Macedonia and Thrace.