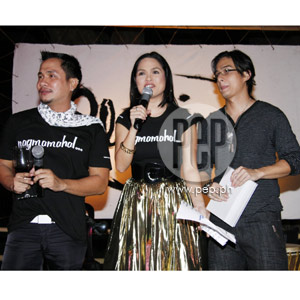 Last Sunday, May 4, the M Café of Greenbelt 4, Makati City served as the venue for the book launch of Ryan Agoncillo's first hardbound book, Ploning: the Making. The band Ube Jam played native instruments such as a tribal drum and a flute as celebrity friends of Judy Ann Santos and Ryan Agoncillo mingled and chatted among the guests while cocktails were served. At the middle of M Café was a table where copies of Ploning: the Making could be bought for P1900.

Around the area, 20 easels made of bamboo were set up to display select black-and-white photos culled from Ryan's coffee-table book. The 200 photographs were taken by Ryan during the film's principal photography on Cuyo Island, Palawan.

With foreword by Tony Mabesa, and main text by film director Dante Nico Garcia, the book is a perfect companion to the Graded A film Ploning, which will be shown in more cineplexes this week, including those of Robinsons and Sta. Lucia malls.

Ploning: The Making is one of Ryan's many gifts to his girlfriend Judy Ann who is turning 30 on May 11.

The book is available in the flower shop of Roberto Antonio at Sgt. Esguerra Street, Quezon City, with telephone numbers 4260119 and 9270332.

During the event, PEP (Philippine Entertainment Portal) asked Judy Ann if she was aware of the box-office results of Ploning, which she co-produced.

Do they plan to show the film internationally?


After the short program, guests proceeded to Greenbelt 3 where the movie Ploning was shown. Among those who attended the event were Derek Ramsay, Iza Calzado, Dingdong Dantes and his girlfriend Karylle, Jolina Magdangal, and Matteo Guidicelli.

NEXT PANORAMANILA PROJECT. According to Jourdan Sebastian of Panoramanila Pictures Co., the producer of Ploning, Dante Nico Garcia's film will be shown in Paris Cinema, a film competition and exhibition in France.

Jourdan says their next film project will be a comedy starring Judy Ann, again under the direction of Dante Nico Garcia. They plan to shoot the film in Puerto Prinsesa, Palawan, and plan to release it in April 2009.

To date, Panoramanila Pictures Co. has not revealed box-office figures of Ploning. The film is being screened in Robinsons Galleria, Ermita, Metro East, SM cinemas, EVER Gotesco malls, and various provincial theaters.


Click HERE to view photos of the book launch.