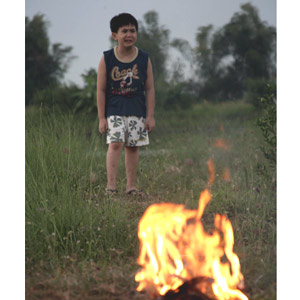 Robert Felongco (in photo) plays Anton in To Ni, a short film by Vic Acedillo Jr. that was part of the 2007 Cinemalaya short feature category. For 2008, Vic is again one of the 10 filmmakers who will compete in the said competition.

It takes a great deal of artistry and imagination to be able to tell a meaningful story in a span of twenty minutes. This is the challenge faced by filmmakers who have been chosen to compete in the Short Feature Category of the 2008 Cinemalaya Philippine Independent Film Competition.

The ten finalists in the Cinemalaya 2008 short feature category have been announced by the organizers of Cinemalaya. They are: Andong by Rommel "Milo" Tolentino; Ang Ibang mga Pamilya by Joel P. Ruiz; Angan-Angan (Dreams) and Trails of Water by Sheron R. Dayoc; Diamante sa Langit by Vic Acedillo, Jr.; Only God Knows by Mark V. Reyes; Huling Biktima by Vitaliano A. Rave; My Pet by Anna G. Bigornia, Panggaris by Dexter B. Cayanes, and Tutos by L.A. Yamsuan.

Andong is a story about a six-year old boy's obsession, as well as family dynamics, and the real value of a hard-fought twenty pesos.

Ang Ibang Mga Pamilya is about a woman who overcomes the grief of losing her adopted son.

Angan-Angan (Dreams) centers on a mute nine-year-old girl named Satra, whose determination to secure a good education reverberates clearly amid the strictness of her Yakan culture. The Yakan are one of the 13 Moro groups in the Philippines. They reside mainly in Basilan, Mindanao.

Trails of Water is an experimental film about a young boy's emotion as seen through his make-believe story.

Diamante sa Langit is about two brothers' journey to compete in a kite flying contest. But getting there takes some time. In the end, they face something unexpected and discover something more precious than winning.

Only God Knows tells the disturbing, gut-wrenching tale of the realities of life in the sprawling metropolis of Manila.

Huling Biktima is a film noir about a detective's last minutes.

My Pet is a 7-minute animation about an 8-year-old girl and her relationship with her first pet, a chick, the subject of a class experiment.

Panggaris is about a prostitute whose life changes when her mute sibling learns to talk, uttering only the word "panggaris."

Tutos unravels the dynamics and complexities of a single father-daughter relationship in a postmodern patriarchal Filipino society.

The final winning entry will be given a grant of P100,000 plus the Balanghai trophy during the awarding ceremony on July 20 at the Cultural Center of the Philippines Main Theater. All the films will be screened during the 2008 Cinemalaya Film Festival on July 11-20 at the CCP.