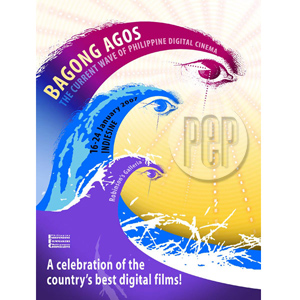 The IFC (Independent Filmmakers Cooperative) proudly announces the regular opening of IndieSine at the Robinsons Galleria to the public. IndieSine is a theater dedicated to alternative movies made by local independent filmmakers. Film enthusiasts now have more movie choices other than just the regular movie fare.

IndieSine will offer regular commercial runs and festivals throughout the year. The unique programming creates an interesting mix of various alternative movies, new and old, as well as experimental and genre-busting films.

Unlike any other commercial cinema in the country today, IndieSine is being marketed as the alternative theater of choice for habitual filmgoers. Located right inside Robinsons Galleria, standing along the row of Movieworld cinemas, IndieSine is bound to capture the interest of the public with its varied selection of independent productions—many of them avant-garde and multi-awarded works.


BAGONG AGOS FILM FESTIVAL. To kick off IndieSine on January 16, the Bagong Agos Film Festival will feature some of the most talked about indie movies last year. Huling Balyan Ng Buhi, directed by Sherad Anthony Sanchez, opens the festival. The film was the 2006 Grand Prize winner of the Cinema One Originals.

Imahe Nasyon, a collaboration of various directors about the Martial Law period, will be the closing film on January 24.