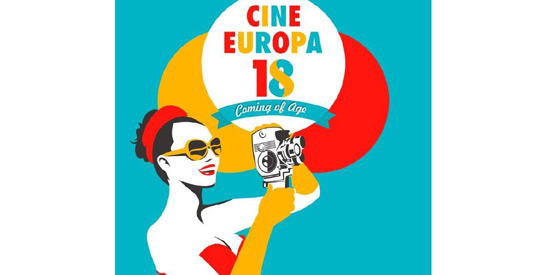 Cine Europa celebrates its 18th "debutante" year by showing 23 coming-of-age films from 18 European countries at the Shangri-La Plaza from September 10-20, 2015.

Mr. Lubomir Frebort, political counsellor of the EU Delegation in the Philippines, emphasized the significance of this year's theme to the history of the festival in the country.

"I believe this celebration of turning 18 means maturity, and a huge step to a more exciting life. It has also grown bigger and is reaching more Filipinos across the country, thanks to partnership with the Film Development Council of the Philippines," said Mr. Frebort.

"Interest in the festival has also grown, not only in viewers but also participants, as Poland is also joining this year."

One major highlight of the festival is the screening of Pride from the United Kingdom, which tells the story of a group of gays and lesbians in London in the summer of 1984 and widely considered as a piece de resistance for the LGBT social movement. Pride will premiere on Friday, September 11, at 5 PM.

Czech Republic also presents a special collaboration with Mexico with the film Little Baby Jesus, which follows a 60-year-old man as he returns to Prague from Mexico to ask for a miracle from the Sto. Nino de Praga. As the child Jesus is particularly significant in many parts of the Philippines, the film will be the highlight of the festival in its Cebu leg on October 9.

Belgium's Puppy Love tells the story of how a 14-year-old girl's life changes when she meets an adventurous young woman.

Meanwhile, its second offering, Gilles, tells the story of a talented boy who dreams of becoming a professional player for his favorite football club.

Romance blooms with the magic of dance in Rise Up! And Dance from Austria, which tells the story of farmer Markus and student Romi and their shared passion for ballet and break dance, reminiscent of the popular Step Up films.

Bulgaria's In Faith, Love, and Whiskey, a newly-engaged woman in America goes back to her hometown where she rediscovers her wild past together with her drifter friends.

Germany offers two gems with The Legend of Paul and Paula, a chronicle of two lovers who go through divorces, sorrows, and betrayals, and Suck Me Sheakspeer, a comedy about an ex-convict who passes himself as a substitute teacher in order to dig up stolen cash.

Norway's Totally True Love presents a very young triangle consisting of a nine-year-old girl, the new boy in her class, and the prettiest girl in school. A young hero also takes centerstage in Denmark's Antboy, whose protagonist develops superpower after getting bitten by an ant. Another boy pursues his passion for music in Finn from the Netherlands.

From France, moviegoers will see the journey of brothers Sylvain and Pierre in La Belle Vie, as they take a break from being on the run to search of the perks of young adulthood.

Italy's Ovosodo (Hardboiled Egg) follows the same theme as it tells the story of Piero, a shy boy from a working-class neighborhood and his transition from childhood to adulthood.

The movie 15 Years and One Day from Spain also shows the struggles of a troublesome teenager who gets sent to his grandfather, a retired soldier.

Switzerland's Keep Rollin', in the meantime, shows success in the face of many odds as it tells the story of daredevil turned paraplegic Valentin, who enrolls in an experimental theatre workshop and discovers the unique qualities of his mentally disabled yet talented co-members.

Adults also find themselves maturing along with youths in The Corpse Must Die from Slovakia, which tells the story of husband and wife teachers Kristof and Nada as they try to deal with a nymphomaniac student and a cheeky stranger. Ginger and Cinnamon, meanwhile, shows how aunt and niece Stefania and Meggy learn about love and family as they go on a holiday in a Greek resort.

Romania takes on a fine mime production with Silent Wedding, a comedy about a wedding as it culminates into a raucous celebration.

Intertwining stories is also a common theme this year beginning with Naked Harbour from Finland, which tells the story of eight different people who are all seeking love and approval at any cost.

Multi-plot drama Stockholm Stories from Sweden, meanwhile, is a contemporary and humorous take on the lives of five people whose paths intersect during a few rainy days in November.

This year's festival of comedies will also be balanced by a slew of dramatic features with the likes of Miasto 44 from newcomer Poland, which tells the story of loves and friendships formed during the 1944 Warsaw Uprising. IDA, also from Poland, shows a young nun’s discovery of a dark family secret that dates back to the Nazi occupation; and Live from Romania narrates successful TV anchor Ema’s struggles in the middle of a big scandal.

Admission is free for all screenings at all locations for the two-month festival.