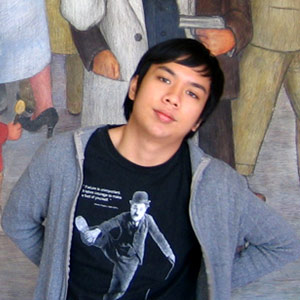 The 23-year-old Filipino filmmaker Raya Martin (in photo) is one of 25 directors chosen to take part in the 40th Directors' Fortnight section of the Cannes International Film Festival.

Raya Martin's Now Showing will have its world premiere at the 40th Directors' Fortnight section of the prestigious Cannes International Film Festival in France. This Filipino film is one of 25 films from different countries that will be exhibited during the filmfest from May 14 to 25.

Born in 1984 in Manila, Raya graduated from the University of the Philippines Film Institute in 2005. He first worked as a writer and researcher for television shows, newspapers, radio programs and online magazines. He is the first Filipino filmmaker to be accepted at the Cinéfondation Résidence of the Cannes Film Festival. Last year, Raya was named Best Director for his film Autohystoria at the 2007 Cinemanila International Film Festival.

The coming-of-age drama Now Showing was shot in downtown Manila and includes clips of a black-and-white film. It tells the story of a girl named Rita (played by Ness Roque). She is named after a famous American movie star whom her late, former actress grandmother once adored. Rita lives in one of Manila's oldest districts with her busy mother and entrepreneurial aunt. Years later, she is still the same girl enamored with television, now also tending to her aunt's stall selling pirated DVD movies.

SYNOPSIS. Rita's mother works at the weather bureau while her father, an overseas worker, disappears when his ship is mysteriously lost on its way home. Rita is named after a famous American movie star whom her late, former actress grandmother once adored. The young girl lives in one of Manila's oldest districts with her mother and aunt.

Years later, an adolescent Tata seems to be the same little girl who is enamored with television. When she's not tending to her aunt's stall of pirated movies, she is busy following the weekly programs on TV.

Beneath all semblance of normalcy is the story of a girl whose mother is trying to win her affection, whose boyfriend is sexually frustrated, and whose father is becoming more and more a distant memory.

Elsewhere float footages from the only film done by a once-famous movie star in the ‘60s, Luna Valencia.