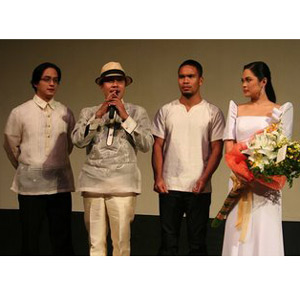 Last May 7, Panoramanila Pictures Co. organized a gala premiere for Ploning at the Meralco Theater to showcase the version of the film with English subtitles. The event was hosted by Palawan governor Joel T. Reyes who praised Cuyo native Dante Nico Garcia. It was attended by Judy Ann Santos, Ryan Agoncillo, and first-time actor Bodyong Fernandez, among others.

When Judy Ann Santos' Ploning opened in cinemas a few weeks ago, moviegoers became curious about the director of the film, Dante Nico Garcia.

"Before I was given the project, I was asked by my director-friends and producers 'what is the one and only film that you want to do in your life?' My answer was ‘Ploning.' It's the story of my hometown, my youth, and my life," said Direk Ga.

Dante is native of Cuyo, an island in the southernmost part of Palawan. Ploning is a story he developed from a Cuyonon folk song of the same title. It tells the sad tale of a Cuyonon lady who has been waiting for the man she loves for many years. It was said that the man left for the city with a promise to return but never did. Ploning refuses to love again and continues to wait.

"I proposed it to Judy Ann about eight years ago, when she was doing films she said she didn't like. I think it was election time and she was doing campaign materials. More so, her contemporaries were into serious roles and sensible films already so she asked me to come up with a serious storyline that will make a memorable role for her," recalled the production designer turned director.

Believe it or not, Dante developed the storyline of Ploning based on stories of the elderly, unmarried nurses in Cuyo's one and only hospital.

"When I was a child, we lived in a house beside the town's hospital. My mother, who went to Manila to deliver seaweeds and other marine products, used to ‘deposit' me in a nearby hospital. I was left under the care of these old, single nurses. Unknown to them, I listened to their ‘chismisan' and from their tales, I came up with a longer story concept for Ploning."

Garcia stayed and lived in Cuyo, Palawan, only until sixth grade but those years were very memorable for him. He recalled how he savored the movies on betamax tapes that influenced his love for filmmaking, with special focus on production design.

He recalled memorable movies such as The Sound of Music and the James Bond series. Among the local films, he cites the fantasy films of Mike Relon Makiling and something like Pepeng Shotgun, starring Rudy Fernandez.

These may not be the usual masterpieces that a filmmaker would mention to impress viewers but Direk Ga was honest enough to admit it, though he was quick to add, "What can I do? there were only about ten available betamax tapes we watched for one month."

He studied high school in San Sebastian College in Manila, paving the way for him to enter the world of showbiz and filmmaking.

"I met Gladys Reyes there. We were part of this book lover's club, where I served as president," he recalled with fondness. "Eventually, it was she who introduced me to Judy Ann."

From then on, he nurtured his friendship with Judy Ann.

"During her Mara Clara days, we would wait outside the set, sitting on the cold pavement from midnight till daybreak. We would talk a lot about anything under the moon. I know everything about her, including her love life," he revealed and quickly added, "which you will see in Ploning."

He proposed the story to acclaimed director Joyce Bernal but she declined, saying only he can direct Ploning. In preparation for this project, he attended a crash course in scriptwriting and filmmaking under Armando "Bing" Lao.

Dante spent 20 days in Palawan to write the script. He spent 36 days in a span of two months for the shooting phase. It was rather fast for a neophyte director but with all the cast members located in one island, there were no distractions.

A resolution released by the local government of Palawan praised Ploning by saying: "...Notwithstanding the many difficulties attendant to the making of a film in a predominantly island setting and with the remoteness of Cuyo, the producers, director and the entire cast of Ploning laboriously went into the filming of what can be considered as a true ‘Cuyuno' film."

Ploning is still showing in SM Megamall, Fairview and Bacoor, Sta. Lucia and Ever Gotesco malls, and in some provincial theaters.