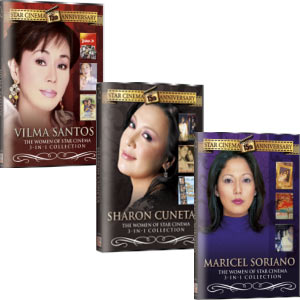 In time for Star Cinema's 15th anniversary in the film industry, Star Home Video has recently released original DVDs that will prove to be collectors' items. The Women of Star Cinema collection is now available in all record bars for fans of these award-winning actresses.

Featuring three of the most prolific female stars today—the Star For All Seasons Vilma Santos, the Megastar Sharon Cuneta and the Diamond Star Maricel Soriano—the limited collectibles feature three of their most successful films.

VILMA SANTOS. Known as the Star for all Seasons, her popularity as an actress did not fade even when she became a public servant.

Dekada '70 (2002). A story of a family caught in the middle of a tumultuous decade, Dekada '70 details how a middle-class family struggled with the new changes that empowered Filipinos to rise against the government. While the government became more oppressive, people became more radical. The suspension of the Writ of Habeas Corpus, proclamation of Martial Law, bombing of Plaza Miranda, random arrests, and detention of political prisoners shaped the decade and helped shape the character of one woman as well. All these events were witnessed by Amanda Bartolome (Vilma Santos), a mother of five boys. While her sons grew up, they formed their own beliefs and led different lives. Amanda asserted her self-identity to make her stand as a citizen, a mother, and a woman.

Anak (2000). Josie (Vilma Santos) works as a domestic helper in Hong Kong to provide a better life for her family—only to find out after several years of absence that her family has fallen apart.

Bata, Bata...Paano Ka Ginawa? (1998). Based on the Palanca award-winning novel by Lualhati Bautista, this film tells the story of Lea Bustamante (Vilma Santos), a woman who chooses to live by her own principles and not upon the dictates of society. She is a mother of two children by different men and she is in danger of losing them to their fathers.

SHARON CUNETA. The Megastar is now celebrating her 30th anniversary in showbiz and shows no sign of slowing down. In fact, her movie Caregiver is slated to be open in theaters nationwide on May 28.

Madrasta (1996). Not all stepmothers are wicked witches. In fact, many of them are like Mariel (Sharon Cuneta), a loving, caring individual who tries to belong in a family not her own and which cannot be truly hers.

Minsan, Minahal Kita (2000).Two people, both married to different partners, unexpectedly fall in love. But, their sense of duty to their respective families keeps their love in check, as well as keeping them away from each other.

Kung Ako Na Lang Sana (2003). Can a man and woman remain best friends? The possibilities are explored in this film about two people of opposite genders who have been best of friends for a long time. Both are searching for love and they just might end up finding it somewhere close by.

MARICEL SORIANO. The Diamond Star is still as lustrous as ever. She is slated to star in the upcoming suspense-thriller Florinda,the third installment of The Susan Roces Cinema Collection of ABS-CBN.

Ama, Ina, Anak (1996). A touching film which discusses the issue of adoption. A film that everyone can relate to, whether you are a mother, father or child.

Soltera (1999). Sandra (Maricel Soriano) is a 35-year old wedding coordinator by profession who falls in love with Eric (Diether Ocampo), a handsome young man 12 years her junior. Their age wide gap causes conflict with Sandra's family. Worse, a romance develops between Eric and Sandra's trusted young assistant Lisa (Claudine Barretto), leading Sandra and Eric to part ways. Sandra is left alone and pregnant. What is the right thing for her to do?

Separada (1994). A successful advertising executive finds herself alone when her husband leaves her for a pregnant mistress. Together with her two children, she learns that indeed there is life after a marital breakup.