"The Chronicles of Narnia: Prince Caspian" opens in theaters, June 4 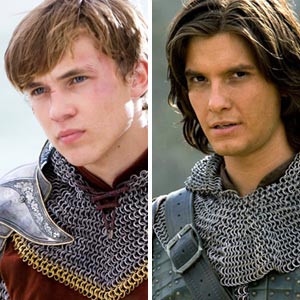 The Pevensie siblings travel back to the magical world of Narnia, where 1300 years have passed since Peter, Susan, Edmund, and Lucy helped Aslan the lion defeat the White Witch. The Chronicles of Narnia: Prince Caspian is the follow-up movie to The Lion, the Witch and the Wardrobe, which was first shown in the Philippines in January 2006.

In Prince Caspian, a Walt Disney movie based on C.S. Lewis' fantasy series, British actor Ben Barnes plays the title role. Before he meets the Pevensies in Narnia, Prince Caspian is rallying support among the Narnians for a campaign against his own people, the Telmarines.

"They're trying to kill him," Barnes explains. "I blow the magic horn and summon the Pevensies back to Narnia. Peter, as the High King, rightfully assumes that he's in charge. We both have different ideas about how we should go about defeating my evil uncle, which leads to this conflict between us.

Barnes is no stranger to the C.S. Lewis literary series. "I was a massive Narnia fan as a kid," Barnes exclaims with the exuberance of an eight-year-old boy delving into the novels for the first time. "I definitely remember the books being a big part of my childhood. When I found out I got the part, I looked through my bookshelves and found this copy of Prince Caspian with 1989 copyright, when I was eight."

HAIL THE HIGH KING PETER. William Moseley reprises his role as Narnia's High King, Peter, who returns to the enchanted land with his three siblings to help Prince Caspian save Narnia from tyranny under the reign of the evil King Miraz. The sequel represents Peter's final appearance in the series.

Moseley (now 21 years old) had his first motion picture starring role in the first "Narnia" film, The Lion, the Witch and the Wardrobe for which he earned nominations for the Saturn and Young Artists Awards.

The young actor says his anticipation and anxiety to get back in front of the movie cameras echoed what his character Peter endured in the time between his 15-year reign of Narnia and his return to the kingdom in the new story. Just like his character, the handsome British native returned to secondary school.

"Finishing the first film was an amazing experience," Moseley says. "Then it was all taken away. Even though I didn't react the same way Peter does, I can really understand how he feels."

Once the senior sibling returns to Narnia, "he becomes slightly arrogant," the actor notes of his character. "There's fighting within the group. Peter cannot accept Caspian. His plans are not set from his heart, but from his ego. Even when he doubts himself, he still is too stubborn to back down and accept that he might be wrong. And ultimately, he pays the highest price."

In the process, Moseley says, his character becomes a man. "When he gets back to Narnia, it's 1,300 years later and people don't know he's a high king. They just see a boy. Peter has to prove who he is to the Narnians."

EDMUND THE JUST. Skandar Keynes plays the role of Peter's younger brother Edmund. Skandar describes the action scenes that he did for Prince Caspian:

"There's a scene where I had to ride a horse without holding on at all and do some sword fighting while horse riding. In another scene I had to smash down a door and then do a dive and roll."

The sixteen-year old British actor also points out his favorite scene in the movie. "I liked a scene where we're all sleeping at a campsite best. I thought it was cool to be paid for sleeping!

"The highlight of the whole production for me was the time we spent in the South Island in New Zealand and I had lots of free time to go bungee jumping. I jumped off the Sky Tower, which is the highest building in the southern hemisphere, and I did the Canyon Swing, which is the biggest swing in the world. Will [cast member William Moseley, who plays Peter] did some of them with me but he was pretty scared. He likes to claim he's more of an action man than me, but there's no way [laughs]."

Skandar also reveals, "I'm playing Edmund again in the next Narnia film, The Voyage of the Dawn Treader. We begin shooting that at the end of the year."