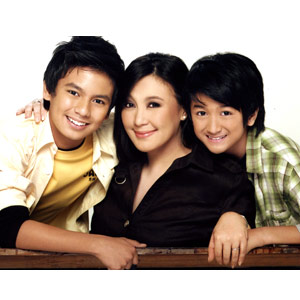 In Caregiver, Sharon Cuneta (middle) plays the mother of John Manalo (left) but she develops a close bond with Makisig Morales (right) during her stay in London. Be touched by the story of a mother who sacrifices everything for the sake of her family.


For three weeks, Sharon Cuneta, John Estrada, Rica Peralejo, Jhong Hilario, Makisig Morales, and director Chito Roño toured the city of London to shoot the movie Caregiver. This marks the movie comeback of the Megastar Sharon Cuneta in time for the 15th anniversary celebration of Star Cinema, the production outfit of ABS-CBN.

John Estrada recalls that they shot scenes in locations such as Trafalgar Square and Portobello Road. As for Sharon, she experienced health problems called cold sores because of the extreme weather in England. She narrates that she had rashes and the flu (trangkaso) while taping in London.

Direk Chito even tells an anecdote about senior citizens who volunteered to act for free in Caregiver. In one of the care homes that they visited, it turned out that the residents used to perform in West End plays and that they missed acting so they asked the director if they could play cameo roles in Caregiver.

On May 27, all roads lead to SM Megamall as the Megastar, Star Cinema, and Direk Chito Roño premiere the film, red-carpet, Hollywood-style! The star-studded event will be doubly significant since it was Sharon herself who first had her premiere night at SM Megamall with Madrasta (1996).

On May 28, over 150 theaters in the Philippines will screen the much-awaited movie of the Megastar. But Filipinos won't have to wait long for them to see this heartwarming story about Filipino healthcare workers. Ms. Sharon Cuneta herself with grace the premieres of Caregiver in Los Angeles, California; Honolulu, Hawaii; London, England; and Rome, Italy.

U.S.A. TFC subscribers, Filipino migrants and workers in the United States will be in for a treat as the movie premieres at Alex Theater in Los Angeles Regular screenings in the U.S. will be on May 30-June 6 in Guam, June 6-12 in Los Angeles, June 13-19 in Seattle, Las Vegas, San Diego, Hawaii and San Francisco.

EUROPE. Pinoys in Europe need not fret as they will see the project that also marks Sharon's 30th anniversary in the showbiz industry. After she shot 80 percent of the movie in London, she will be back, now bringing with her the final product. The Megastar and Direk Chito will grace the European premiere of Caregiver on June 6 at the Prince Charles Theater in London and on June 7 at the Warner Theater in Rome.

MIDDLE EAST. Caregiver will be a delight for the Filipinos in various Arab nations as it holds its regular screenings on June 19-21 at the Grand Cine Center in Qatar and Seef Complex in Bahrain, June 26-28 at the Grand Al Mariah Cinema in Abu Dhabi and in Al Ghurair Cinecity in Dubai.

ASIA AND THE PACIFIC. On May 31, Sharon and Direk Chito will grace the premiere of Caregiver in Honolulu, Hawaii at the Hawaii Theater. Regular screenings will be held on May 30-June 06 at the Micronesia Mall in Guam, June 13-19 at the Regal Dole Cannery Stadium 18 in Hawaii, and on June 16 in Japan.

Filipinos all over the world will be wowed with world-class Filipino talent with the showing of Caregiver in various countries and continents. Stay tuned for further announcements of screenings in other cities worldwide.