Why did Derek Ramsay replace Sam Milby in Ex With Benefits? 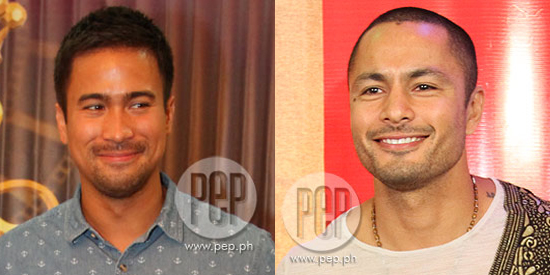 Sam Milby (left) was the original choice to play Adam in the movie Ex With Benefits. However, was replaced by Derek Ramsay (right) because Sam chose to prioritize his opportunities in the United States.

It was originally Sam Milby who was handpicked to play the role of Adam in the sexy romance drama, Ex With Benefits.

In an earlier interview with PEP.ph (Philippine Entertainment Portal), Sam revealed that he had to pass up this movie and the 2014 movie English Only, Please because he had an opportunity to study acting in Los Angeles, USA.

In both movies, Derek Ramsay was chosen as his replacement.

Derek was also the one who replaced Sam in English Only, Please.

In the September 5 episode of Bottomline, the movie’s creative director Kriz Gazmen further explained why Sam had to be bumped off from Ex With Benefits.

“During that time, Sam Milby was the other choice kasi we were looking naman for somebody who can portray the role of Adam which is supposedly mature na and can pass off naman becoming a doctor.

“Sam had problems with schedule kasi he had opportunities daw in the U.S. I think he wanted to take those opportunities.

“During that time, we really had to start shooting. We already booked Coleen [Garcia] and Meg [Imperial] so nakakahiya naman if we delay the project.”

When asked why the hunky actor did not hesitate to accept the project, he answered: “That title grabbed my attention real quick!”

He also added the fact that it’s his comeback to Star Cinema after three years.

“And the fact that it’s Star Cinema, wow.

“It’s a project that they have approached me and entrusted me to do after three years.

“Just seeing the title and knowing that it’s Star Cinema, I was like, 'Okay.'”

In an earlier interview, the TV5 actor also related that he is happy that the project was offered to him, despite being the second choice.

“But to be a second choice, it's fine with me, I'm happy that the project came to me.

“Kailangan ko na lang buhayin 'yon, and that's where you put in your talent and you bring that character into life.”

She also appeared in the teleseryes My Binondo Girl in 2011and Little Champ in 2013. She is also a regular host of ABS-CBN’s noontime variety show It’s Showtime.

In 2014, she made her movie debut via the Cinemalaya entry #Y, which was also directed by their Ex With Benefits director, Gino Santos.

Currently, she appears in the early primetime teleserye Pasion De Amor where she was paired with Joseph Marco.

During the Bottomline episode, Kriz narrated how Coleen became the choice of playing the lead Arkisha Aragon in the movie.

“There was no other options talaga because we wanted someone fresh for the movie.

“We wanted somebody who can portray sexy and at the same time, sensitive.

Kriz added, “When you look at Coleen kasi, she’s not acting. She’s the character.

“Sabi namin, why not do something for Coleen and I think it’s time naman na that we discover new talents for Star Cinema.”

For her part, Coleen did not hesitate to accept the project since she saw this as an opportunity for her to grow.

She pointed out, “I played very limited roles before. I read the script first and it was very well written.

“The concept was daring but at the same time, for a reason. The story was definitely worth everything that I had to step out of the box for.”

Ex With Benefits is currently being screened in cinemas. It also stars Meg Imperial and Rayver Cruz.