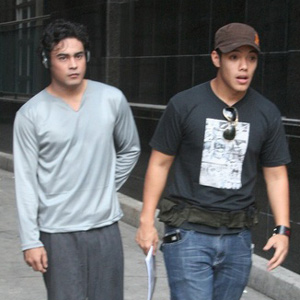 "Nakakagulat to say that I'm a film director now," says Joaqui Valdes. He started out as a VJ in Studio 23 but is now Miriam Quiambao's co-host for GMA 7's 100% Pinoy. Joaqui's 30-minute film titled Bulong will be competing at the 2nd New Beijing International Movie Week, which begins on June 1. Bulong was also chosen to take part in the 61st Cannes International Film Festival in the non-competition Short Film Corner.


The film is "a speculative fiction about a city where everybody is unconsciously controlled or made to believe that they are free, but they all follow a routine day in and day out," says Joaqui. But then, the protagonist Julio (Sid Lucero) hears a voice that commands him to do something that could potentially change their lives forever. But no one believes him. Not even his wife. The main conflict, as pointed out by the director, is whether Julio will pursue what is he knows is right or submit to the status quo.

The high-definition digital movie was originally submitted by 24 year-old Joaqui as his thesis for the University of the Philippines Film Institute. He produced, wrote, and directed the 30-minute movie that was also screened at Fully Booked in Bonifacio High Street last April.

The film student dedicates Bulong to his fellow youth: "I feel it carries a message we all need to hear, [what] with all of the pressing issues right now, where situations and conditions around us are further calling us to make a stand as young people, I needed to show that."

Discussions after the screenings, whose audience was also composed of young people, were dynamic. Said Joaqui, "Some said it was philosophical, some said it was disturbing, others thought it was inspirational."

Considering the obstacles in short filmmaking, including limited resources, Joaqui says his sci-fi movie "doesn't really have a lot of exposition. I left certain elements unanswered. So that they [viewers] will question and think what they would do if they were in that situation."

This is only the beginning for Direk Joaqui since he already has a full-length film in the works. He says that he draws inspiration from the Filipino people, for whom he makes movies. "I feel that it's my mission to continue telling people about what they can become and how far they can go. As I tell other people about their potential, it reveals a little more about myself."