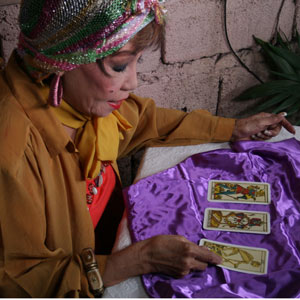 A few years ago, Paolo Herras was required to consult a fortuneteller for his class Philippine Regional Literature. Out of the ten students who consulted with the woman based in Antipolo, the fortuneteller told him that he should pursue his writing career or else he would lose this gift.


At that time, Paolo was thinking about giving up on writing but fortunately, the fortuneteller was able to convince him to continue with his chosen path. Since then, Paolo has written and directed the indie films Lambanog and Rekados (2006). The latter, Paolo's entry to Cinema One Originals, is a tragicomedy about three generations of cooks played by Boots Anson Roa, Eula Valdes, and Meryll Soriano.

This time, Eula Valdes will once again be part of Direk Paolo's movie about three generations of fortunetellers who are being tapped by a syndicate to fool people. The director says Messina, Eula's character, is a modern-day Cassandra who can predict death and tragedy but whom no one listens to.

Direk Paolo shot this film in Novaliches, with principal photography concluded last May 11. In a phone interview with PEP (Philippine Entertainment Portal), he expounds about the roles of fortunetellers in society: "This movie is more about fortunetellers being symbols of hope. I'd like to think they [fortunetellers] are telling the truth. This movie doesn't have anti-Church sentiments but it goes back to our traditional beliefs.

"You may call fortunetellers as spiritual guides or spiritual readers who help you make sense of your place in the universe. It doesn't make me less of a person if I consult fortunetellers. They just give you a new perspective during times when you can't or don't want to see the options."

To suit the theme of the movie, Paolo decided to cast 22 stars for Ang Manghuhula. This represents the number of major arcana in a deck of Tarot cards.

According to Direk Paolo, Ang Manghuhula is the last movie of Bella Flores before she immigrated to the United States earlier this year.

SYNOPSIS. Messina, an outcast and failed fortuneteller (Eula Valdes) returns to her hometown to save her daughter Claire (Glaiza De Castro) from a syndicate that aims to exploit her gift of fortune telling. When Messina returns, she finds her daughter caught in debt and the squabble of a petty syndicate (run by Emilio Garcia and Pinky Amador) running a band of fortunetellers for the unwary, desperate answer-seekers.

For years, their hometown has been grooming one great fortuneteller just as they had hailed Dorothea (Chanda Romero) as the town's leader. Dorothea is the grandmother of Claire who appears in her dreams.


A helpful fortuneteller named Rachel (Bella Flores) teaches Messina that the only way to save her daughter is to embrace a gift she has vowed to give up, the ability to see the future no matter how bleak and inescapable.