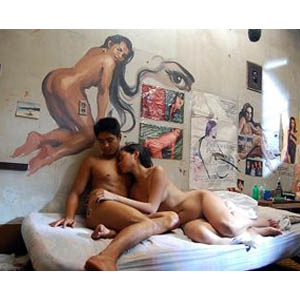 Coco Martin and Mercedes Cabral looked so comfortable doing their nude scenes in Serbis, one of the films in competition at the ongoing Cannes Film Festival.

CANNES, FRANCE—After Brillante "Dante" Mendoza's Serbis was screened before an aghast audience too shocked and overwhelmed to react by the graphic sex, nudity, filth, and poverty shown, there simply is no way we can forsee how the awards on May 25 will go. But judging from initial reviews, Dante's future appears secure.

Maggie Lee in the Hollywood Report wrote that Brillante continues the neo-realism of Foster Child and Tirador, but shows marked improvement in the film which contains elements of soap opera minus the froth and lather. She goes on to praise Gina Pareño in her "portrayal with fire and tears of the multiple roles of aggrieved wife, mother, and pillar of the family." The real star of the movie, she continues, is the theater itself, which symbolizes poetically the predicament of its inhabitants and their moral ambiguity.

Several in the exhibition audience also commented on the great acting restraint essayed by Jaclyn Jose who while harboring a secret life went about her mundane tasks mildly and passively, indeed a difficult role in any language.

The young lovers Coco Martin and Mercedes Cabral drew plaudits for their complete lack of affectation especially in scenes that required total nudity, something both confessed to us, they were doing for the first time.

It is also fortuitous that Fortissimo Films acquired distribution of Serbis even before it got accepted in Cannes or that Swift Productions' Didier Costet who distributed Dante's Masahista and Tirador decided on Serbis as his first co-production venture. It is constantly bruited about that Dante and his friend and producer Ferdie Lapuz have had the best of luck. Not that they haven't worked hard at it.

The environment in the Philippine participation at Cannes this year is a far cry from the days of Lino Brocka when there was hardly any government and international subsidy. While filmmakers in the [developing countries] still need to scrounge around for funding, there is today an entire range of funding possibilities from international sources some of which Dante has acquired, which was not as readily available 30 years ago.

The Philippine Development Council headed by Jacky Atienza with Christine Dayrit as Chair of the Cinema Evaluation Board and Festival Committee has supported the two Philippine participants at Cannes—Serbis in competition and Now Showing by Raya Martin in the Directors' Fortnight—with airfare, lodging, subtitling, print, and per diem expenditures. According to Christine, a total of P1.4-M has been allocated by the FDCP for the Cannes participation this year, the biggest ever given to any one project.

The Philippine Embassy in Paris led by Ambassador Jose Zaide has likewise extended all its moral and logistical support to the entries, while mobilizing Filipinos in Cannes to open their homes to house members of the entourage of the two films.

Among the generous donors are Tetta Agustin, known as the most successful Filipino model ever to invade the international scene, who opened her fabulous mansion for cocktails for the Serbis delegation; and Elsa Pascual, president of the Pag-Asa Associatiion of Filipinos in Cannes; Rose Mariano; Amy Cedo; and Tess Bondoc who hosted the lodgings of the Now Showing cast and artistic staff.