Thumbs up for Caregiver 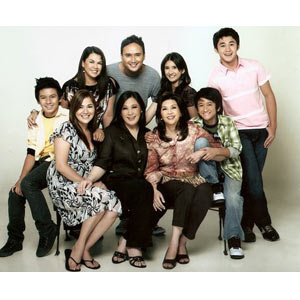 Before the screening began, anticipation filled the theater, which was jam-packed with Sharonians, media people, and showbiz celebrities. Everyone had high expectations. First, Caregiver is the 15th anniversary offering of Star Cinema. Second, it's the comeback movie of Sharon Cuneta after four years of absence from the silver screen. Third, it's the first tandem of director Chito Roño and the Megastar. Fourth, the Cinema Evaluation Board gave it a grade of "A," which means total amusement-tax exemption for excellence.

THE STORY. The movie revolves around the life of Sarah Gonzalez, an English schoolteacher in the Philippines who decides to become a caregiver in London. She has to leave her son Pau (John Manalo) to join her husband Teddy (John Estrada) who works in the world's second most expensive city next only to Moscow, Russia.

Sarah leaves the country with optimism, looking forward to being with Teddy and earning more money in British pounds. But reality begins to sink in only a few days after she is reunited with her husband.

Here come the unpredictable twists in the film: the marital problems of Sarah and Teddy, the complicated lives of the other Pinoys working in London, the hardships and friendships that Sarah experiences as a caregiver, and even the surprise ending of Caregiver.

The storytelling is good, but don't expect an elaborate narration of how a caregiver does her job, or a lot of tear-jerking moments. The focal point is on the main character, and how she copes with the troubles in her marriage and the demands of her stressful job.

It's fast-paced, with hardly no dragging scenes. Each character has his or her own struggles, and despite the many things happening around Sarah, all these are put together seamlessly.

London's famous landmarks and a bit of UK's countryside are shown but without diminishing or stealing attention from the dramatic scenes.

THE CHARACTERS. Sarah's character is not your typical brow-beaten Overseas Filipino Worker portrayed in most movies about OFWs. She's matiisin pero marunong lumaban. She endures hardship but fights back when she must.

Sarah brings out a different Sharon. The Megastar does not cry buckets of tears here, but she renders emotions deeply enough to touch one's core.

Among the movie's highlights are the quiet moment with Pau in the swing and a tension-filled scene with Teddy. As Sarah, Sharon doesn't have to cry to convey her stirring emotions. Her facial expressions and minimal gestures do the job. The caregiver is jumpy, usually unsure of herself but she knows what's right, and she's assertive when needed. In most scenes, she looks weary and worried. Sharon is truly effective in letting her audience know that she did not go to London "para magpa-picture."

Direk Chito said that John Estrada was a "revelation." Indeed, John switched his character smoothly from good to bad and vice versa, proving his versatility as an actor. If the intent was for the viewers to hate his character, John succeeded well.

The other actors had minor roles in the film yet they also made their mark. The brief scene with Anita Linda was very touching. As Sarah's lola, Anita Linda gives her granddaughter a balabal before her flight to London to keep her warm there.

The British actor who plays Mr. Morgan, an ailing old man who initially brushes off Sarah, but eventually feels blessed by her efficiency and friendship is a standout. There are many defining moments between Sarah and Mr. Morgan.

THE IMPACT. Caregiver isn't the heavy drama that most people would expect. Dramatic scenes are lightened up by a humorous remark by Sarah or her co-workers. The movie clearly shows the various facets of Pinoys working abroad—their pains and sacrifices, dedication to their jobs, and their competence—realistically and without exaggeration.

It is definitely pro-Pinoy. Most of the scenes were filmed in London, but the visual elements are reminiscent of our culture: the bagoong and buro, the Sto. Niño, adobo, Sarah's bayong, the clannish propensity of Pinoys, family togetherness, to name a few.

It is socially relevant. It would surely uplift the spirits of the OFWs and their families, and it could be an eye-opener for women who play multiple roles—wife, mother, breadwinner. One of Sharon's unforgettable lines says it all, "Kung walang unang hakbang, paano tayo uusad? Kung uunahan tayo ng takot, paano tayo magsisimulang makipagsapalaran?"

Sarah describes her labors as a "thankless job," but the movie conveys the true dignity of Filipino caregivers in England, and by extension, in many other countries around the globe.

Now that has more bearing than the tears I initially expected to shed.