Patrick Dempsey finds true love in "Made of Honor" 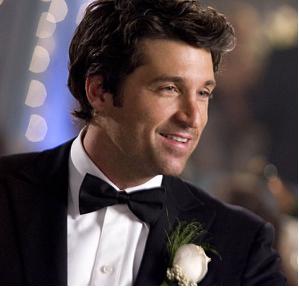 Patrick Dempsey plays a playboy businessman named Tom in the movie Made of Honor. This romantic comedy from Columbia Pictures will soon be shown in cinema houses nationwide.


If you are one of the millions of people worldwide who have swooned over Dr. Derek Shepherd (aka "McDreamy") in the hit drama series Grey's Anatomy, you'll be thrilled to hear that Patrick Dempsey is every bit as dreamy in person, a quality that will be used to the hilt in Columbia Pictures' new romantic comedy, Made of Honor.

Dempsey exudes old-fashioned confidence and charm that will be fully exploited in his upcoming film. Made of Honor also marks the first time he has been billed as the star of his own movie after appearing in a string of teen movie classics twenty years ago. "It's good to be a survivor and have experienced a little bit of everything," the 42-year-old actor says happily.


In Made of Honor, Dempsey plays Tom, a womanizing businessman who's only constant in life is his best friend Hannah, played by Michelle Monaghan. When she goes to Scotland for six weeks, he's stunned to realize how empty his life is without her and decides to tell her his true feelings when she returns. But Hannah returns with a fiancé and asks him to be her "maid of honor," a request that Tom reluctantly accepts so he can undermine the relationship and woo her back for himself.


"It's huge," he admits excitedly of the first time he's ever seen his name above the title on movie posters for this film. "It's a lot of pressure being able to greenlight a picture but it feels good to know I've made that step and that hopefully I'll be taking the audience with me on this journey."


Dempsey is modest but can't help gush when asked about his latest film. "It's a fun, sweet, old-fashioned romantic comedy and it was a perfect opportunity for me to do something different but at the same time get to play a romantic character," he says.


Even Dempsey can't believe until he's reminded that it's been two decades since he became an overnight star with two films which became instant teen classics: Can't Buy Me Love and Loverboy. Looking back on that time in his life, Dempsey recalls, "it was a very intense time in my life with those movies all happening in the space of eighteen months. That was then and this is now and I'm glad it's now!"


"Grey's Anatomy has changed everything in my career and it's been an incredible year," says Dempsey. "I went from being on a hit show to filming Enchanted back to Grey's and then to Made of Honor so it's been hard to keep up with all that!"


Dempsey doesn't flinch at the possibility he could get typecast as McDreamy on both the big and small screen. "I have to slowly take people on that ride because I have this romantic character from Grey's and Enchanted and now I'm going into a slightly different direction and giving it more dimension in Made of Honor," he says. "I've been offered a few things after this and one is a complete departure from all that, so I will hopefully take those chances in the future."

Opening soon across the Philippines, Made of Honor is distributed by Columbia Pictures, local office of Sony Pictures Releasing International.