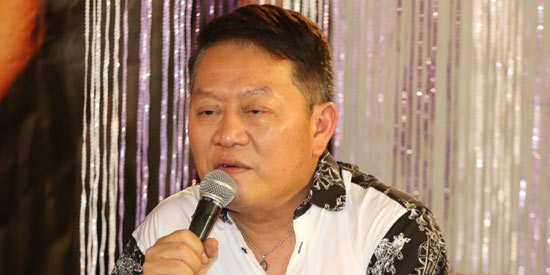 “It's really a woman's movie,” director Chito Rono stressed about his upcoming film, Etiquette for Mistresses.

This is the reason why there is no lead actor shown in the trailer of the Star Cinema movie.

“Actually, it was really intentional,” he further explained.

“Sila lang mismo, without anybody around them. Gusto ko sila makita mismo without the men.

He clarified, on the other hand, that the movie does not intend to glorify mistresses.

“Parang di namin obligasyon to really moralize the characters,” he pointed out.

“I think we're beyond time and beyond age where moralizing is effective.

“Of course, we know what morality is, but we also have to know... Ang tanong sa pelikulang ito is paano kapag tinulak ka na ng puso mo?

“When we started the movie, they were already in their positions.

“They're not ordinary women who were there just because.”

FASCINATION WITH MISTRESSES. During the press con, the veteran director was asked what makes mistresses a fascinating subject for filmmakers?

"There will always be that other woman.

He pointed out that the concept of "the other woman" has endured throughout the centuries.

"Mistresses have been always been there forever in all cultures of the world.

"In fact, there are several books that discuss the history of the world and show that mistresses are everywhere.

"Even the popes have it, in the early days.

"It cannot be denied that it plays an important part of world history.

"Sila ang secret behind all of these."

MISTRESSES THEN AND NOW. Etiquette for Mistresses is inspired by Jullie Yap-Daza’s best-selling book of the same title.

How different is it directing a mistress movie 15 years ago and directing one for modern times?

"I've done mistress movies but these were within the context of the time," recalled Direk Chito.

"If you were a mistress, you were always expected to be scandalized or revealed by the wife.

"Having read Tita Jullie's book many years ago, it's not an exclusive thing to the komiks world.

"The world of Tita Jullie was familiar to me, honestly, so I could see how people fall into the scandal."

GOING BEYOND LABELS. Direk Chito believes that even though a person is labeled as a mistress, she can still go beyond that label.

"In this movie, we have passionate women who believe in love and are together as friends and have a real friendship.

"They go through many things.

"The mistresses in this movie are intelligent people and successful."

How did he treat mistresses in this movie?

"When I did this movie, sinabi ko sa sarili na this movie is not really about mistresses.

"It's about women, the empowerment.

"It's how, at the end of the day, after going through so much, they themselves would decide on what to do.

"Para sa akin, it's a liberating movie. It's a redemptive movie.

"I concentrated on women who would fight for themselves.