Steve Carell does his own stunts in "Get Smart" 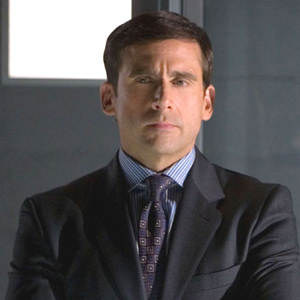 Steve Carell (in photo) narrates the action scenes that he and Anne Hathaway did for the action comedy Get Smart. This movie from Warner Bros. will open in cinemas nationwide starting June 19.


Steve Carell has emerged as one of the most sought-after comedic actors in Hollywood with starring roles in such box-office hits as The 40-Year-Old Virgin, Evan Almighty and Horton. Carell topbills Warner Bros.' new action comedy Get Smart as CONTROL agent Maxwell Smart who's sent on his most dangerous and important mission: to thwart the latest plot for world domination by the evil crime syndicate known as KAOS.

It also happens to be Maxwell's very first mission.

"I'd say it's 80 percent comedy, 20 percent action, 15 percent heart, 35 percent romance, 10 percent adventure and probably less than one pecent horror," Carell describes the film. "Put that all together and you have more than 100 percent, which is more, really, than you can expect from any movie."

Steve Carell: Wow. You know what? As soon as you start to talk about your own mannerisms you are screwed because if you're aware of your own mannerisms, or even beyond that, like what makes any one thing funny to people, I really ascribe to the idea that if you start deconstructing it too much, it is immediately not funny. If you start over-thinking it or trying to figure out some sort of formula, it's math. It's not anything organic.

Q: Can you talk about your character, Maxwell Smart?

Q: Can you talk about what it's like to make an action movie?

Carell: Honestly, it could not have been more fun. It's something you dream about as a kid. It is literally like playing in a sandbox for several weeks, and pretending. There are parts of the movie that Anne Hathaway and I are hanging off the sides of buildings and rappelling underneath a plane and having a fight on top of a moving SUV that is also on fire and about to smash into a train. All of these things are a far cry from anything I've ever done before. So, yeah. As you could imagine, it's just so much fun.

Q: How far would you go before a stunt person would take over?

Carell: Probably the riskiest thing I did was being pulled behind a moving SUV down train tracks. That was a little scary. The stunt people are so good and they really make sure that you're safe. I never felt that my life was in peril at any point. I think it plays as an action movie as well as a comedy.

Q: Do you want to talk about the number of gadgets that Maxwell Smart has?

Carell: Well, there's the Cone of Silence but it's absolutely unusable. The Shoe Phone makes an appearance and a lot of people are asking about the Shoe Phone because it doesn't seem to fit with modern technology. And there's a very clever way in which the shoe phone is integrated into the movie—very plausible and makes sense plot-wise. I have this little gadget which you see a tiny bit of in the scene in the airplane bathroom. It's a tiny Swiss army knife that has several gadgets within it, including a crossbow, a flamethrower, and some other things that you find out along the way. So, the gadgets are alive and well.

Opening soon across the Philippines starting June 19, Get Smart is distributed by Warner Bros. Pictures, a Warner Entertainment Company. This action comedy will have a sneak preview on June 10 (Tuesday) at Trinoma in Quezon City.